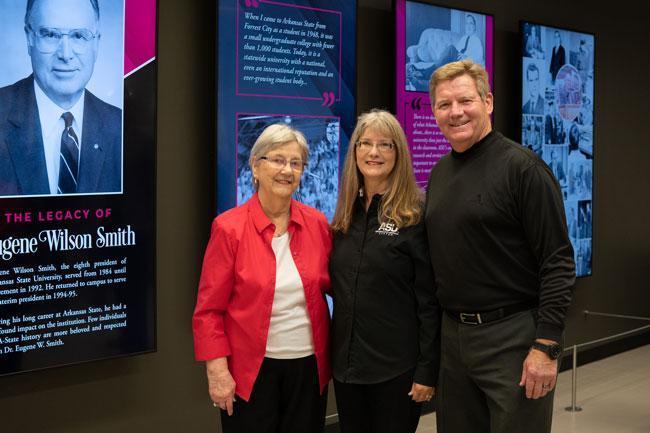 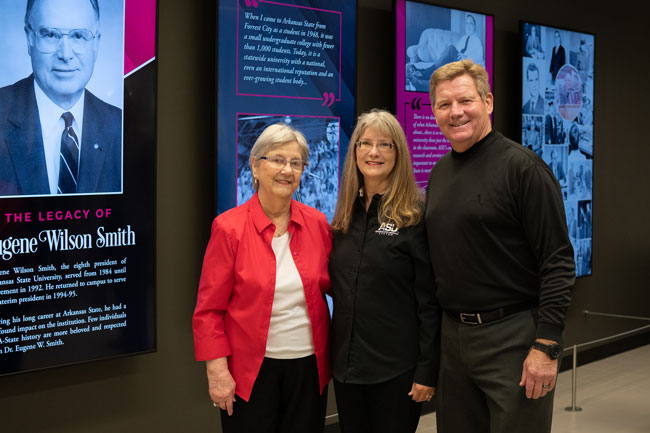 JONESBORO – During Convocation of Scholars 1995, Arkansas State University dedicated a major expansion of the Dean B. Ellis Library.

The campus landmark, which features an eight-story addition with clock tower and bell carillon, was one of the major projects achieved during the administration of the late Dr. Eugene W. Smith, who served as the institution’s eighth president.

The library project and additional highlights of Smith’s life as an A-State student, alumnus, faculty member, administrator and president (three times if one counts interim appointments) are documented in a new digital tribute wall on the main floor of the library.

Smith’s wife, Ann, and their daughter, Lucinda McDaniel, provided a major gift to support creation of the permanent record of the former president’s leadership and contributions to the institution. The display screens are programmed with content from various stages of his life and career in higher education, illustrated with photographs scanned from university photo and negative collections. The text, design and display were produced by staff in A-State’s Division of Marketing and Communications.

“Thank you, all of you who have worked on this in any way,” Mrs. Smith told a group of university representatives after viewing the tribute wall along with Lucinda and her husband Mike. They made a special trip to campus to see the display. “I am just delighted. Gene would have been so honored to see what has been done in his honor.”

The family’s donation also includes support for the University Archives on the library’s seventh floor. The Board of Trustees officially approved naming the Eugene W. Smith Reading Room, where the public may access information from the archives. Several of Smith’s personal items, including diplomas, plaques and photographs, also are displayed there.

“It is so unusual to encounter a man who devoted his entire working career to one institution. After returning to what was then Arkansas State College in 1958, Dad never left.  He spent his entire career supporting and promoting the university he loved,” noted Lucinda McDaniel, who served several years as university attorney before retiring. “Through the tribute wall and reading room displays, the public will be able to learn about the history surrounding the man who gave almost 40 years of his life to Arkansas State University.”

A native of Forrest City, Eugene W. Smith came to Arkansas State as a student in the fall of 1948. After completing a degree in English, he served with the Army for two years in Korea then went on to graduate school at Ole Miss, where he earned master’s and doctoral degrees. After working in post-doctoral research, he eventually returned to A-State as a faculty member and later joined the administrative team of then-president Dr. Carl R. Reng.

After serving as dean of the Graduate School and as vice president for several years, the Board of Trustees appointed Smith president in 1984. In addition to the library expansion, some of the highlights of his eight-year presidency include establishment of the first doctoral program at A-State, creation of the university’s Alumni Relations Office, construction of First National Bank Arena, moving the athletics program into NCAA FBS-level competition, and a major increase in enrollment.

Original article source: http://www.astate.edu/news/tribute-wall-documents-leadership-of-former-president-eugene-w-smith | Article may or may not reflect the views of KLEK 102.5 FM or The Voice of Arkansas Minority Advocacy Council