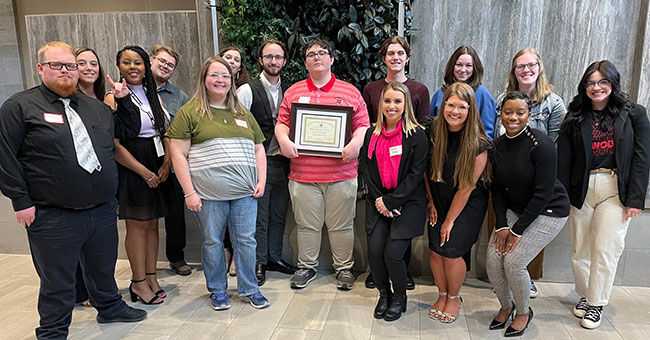 ACMA recruits judges from the national College Media Advisers, who rated 550 entries for this year’s contest from newspaper, online, magazine, radio, television and yearbook categories. Judges award entries based on their excellence as shown by design, photography, concept, coverage and writing.

“I loved seeing our students getting to see their work receive serious acclaim from professionals,” Roberts said. “Both Red Wolf Radio and ASU-TV News have pushed hard to maintain a variety and quality of programming and storytelling despite the struggles that everyone has had to contend with lately. In fact, those struggles are often a big part of the stories we tell. I think our results from this year’s competition reflect our success with that.”

Roberts moderated a panel on “The Changing Face of Media” that included A-State alumna Gretchen Hunt, editor of The Jonesboro Sun, as well as KAIT’s Grendel Levy and KLEK’s LaGanzie Kale. Associate professor of multimedia journalism Sandra Combs, who serves as The Herald adviser, moderated a sports panel including A-State alumni Steve Sullivan of KATV and Jeff Reed of A-State Nation, as well as KAIT sports director Chris Hudgison. She also got to see the fruits of The Herald’s labor.

“I’m proud to see The Herald staff rewarded for practicing good journalism in the 101st year of informing the campus and community of Arkansas State University,” she said.

“It was wonderful finally hosting the other excellent media and journalism programs from Arkansas,” said Dr. Brad Rawlins, director of A-State’s School of Media & Journalism. “It gave us a great opportunity to showcase Arkansas State University’s School of Media and Journalism and its student media, particularly the excellent work of the students. Several faculty members worked hard to finally bring ACMA to Jonesboro for the first in-person conference in three years, and the success of the conference is due to their efforts.”

Here is a list of the awards, by category and entry: 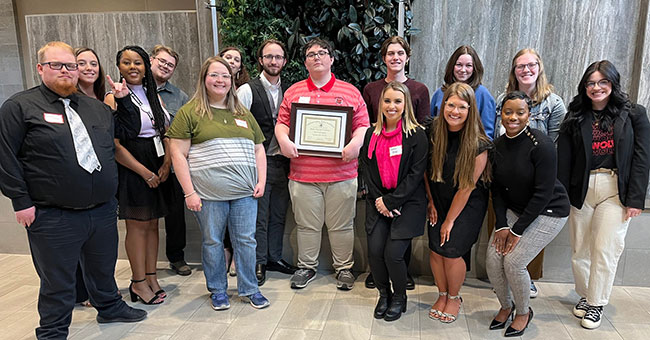 Original article source: http://www.astate.edu/news/students-win-44-awards-at-arkansas-college-media-association-conference | Article may or may not reflect the views of KLEK 102.5 FM or The Voice of Arkansas Minority Advocacy Council