GBN’s Daily Drop: Raven Wilkinson – the 1st Black Ballerina to Dance with a Major Company in the U.S. (LISTEN) 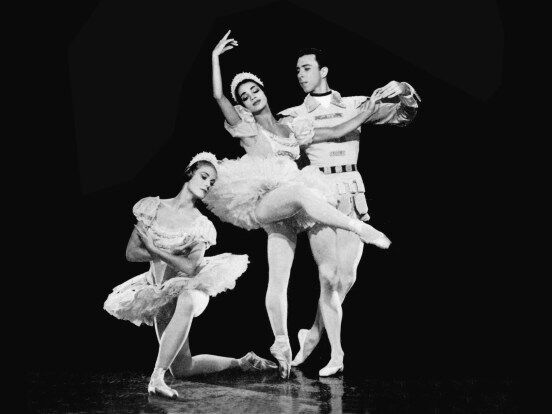 Today’s GBN Daily Drop Podcast is a bonus episode for Sunday, February 20, 2022 based on the  “A Year of Good Black News” Page-A-Day®️ Calendar for 2022 format. It’s about Raven Wilkinson, who, when she joined the Ballet Russe de Monte Carlo, became the first African American ballerina to dance with a major company in the U.S:

You can also follow or subscribe to the Good Black News Daily Drop Podcast through Apple Podcasts, Spotify, Google Podcasts, rss.com or create your own RSS Feed. Or just check it out every day here on the main website (transcript below):

Hey, this Lori Lakin Hutcherson, founder and editor in chief of goodblacknews.org, here to share with you a bonus daily drop of Good Black News for Sunday, February 20th, 2022, based on the “A Year of Good Black News Page-A-Day Calendar” published by Workman Publishing.

Born in 1935, New York native Raven Wilkinson attended her first ballet when she was five years old, a performance of Coppélia, danced by the esteemed Ballet Russe de Monte Carlo. From that moment on, Wilkinson wanted to be a ballerina. Fortunately, her parents were able to find her a teacher, and Wilkinson trained with Russian instructor Maria Swoboda, who was a former member of the Bolshoi Ballet.

Wilkinson eventually got the opportunity to audition for Ballet Russe, the same high-profile company which inspired her to dance. Ballet Russe was reluctant to hire Wilkinson, however, for fear of backlash when performing in the South.

Wilkinson nevertheless persisted, and by her fourth audition, Ballet Russe could no longer deny her talent and hired her, making Wilkinson the first African American woman to dance with a major ballet company in the U.S.

Her appearances in the South though, they did incur hostility and threats. Wilkinson was encouraged to wear pale makeup while dancing to “pass,” but she always refused to hide her race. The racism she did encounter did take its toll however, and Wilkinson stopped touring in the South and eventually everywhere.

A few years later in 1967, encouraged by Sylvester Campbell, another African-American dancer, Wilkinson auditioned with the Dutch National Ballet, got in, and stayed with the Netherlands-based troupe for seven years. Wilkinson then returned to New York and at nearly 40 joined the New York City Opera, serving first as a member of its ballet ensemble and then in other roles until she retired from performing altogether.

A mentor and friend to Misty Copeland, in 2015 Wilkinson attended Copeland’s debut in the lead role of Swan Lake, as she became the first African American principal dancer at an elite company, the American Ballet Theater in New York.

Wilkinson brought Copeland flowers onstage, and in 2019, Copeland paid tribute to Wilkinson in a video produced by The Root:

“Every black person that’s accomplished something incredible has had to endure some really awful things. I think that Raven is a very special case. Because I think that she was so good at making the worst situations into a learning experience or something that she made into a good situation. It’s amazing that we found each other and, and that it kind of just came full circle, you know, for her to be able to witness my promotion to principal dancer, to be able to have her come on to the stage during my curtain calls of my New York debut of Swan Lake was, was really overwhelming.

She told me she didn’t think she’d ever see a Black woman become a principal dancer in an elite company. To have her walk into events and walk into the ballet and for people to like, recognize her, and, and give her the due credit that she deserved all of these years. I think, again, it’s just kind of part of what I think my purpose was to be here. To tell the stories of all of these Black ballerinas, especially Raven’s. There’s just no real record of our existence through history. And the more stories we tell of Black dancers, the more that we can make it our history and make ballet our own.”

To learn even more about Raven Wilkinson, check out the 2016 documentary Black Ballerina in which Wilkinson is featured, Stillness Broken, the Columbia University School of Journalism student film about Wilkinson, the 2018 picture book based on her life titled Trailblazer: The Story of Ballerina Raven Wilkinson that includes a forward by Copeland, as well as several other sources provided in today’s show notes and in the episode’s full transcript posted on goodblacknews.org.

This has been a bonus daily drop of Good Black News, based on the “A Year of Good Black News Page-A-Day Calendar for 2022,” published by Workman Publishing, and available at workman.com,Amazon, Bookshop and other online retailers.

Beats provided by freebeats.io and produced by White Hot.  Additional songs permitted under Public Domain license included were “The Festival Dance” from Coppelia composed by Delibes, and “Dance of the Sugar Plum Fairy” from The Nutcracker composed by Tchaikovsky.

Original article source: https://goodblacknews.org/2022/02/20/gbns-daily-drop-raven-wilkinson-the-1st-black-ballerina-to-dance-with-a-major-company-in-the-u-s-listen/ | Article may or may not reflect the views of KLEK 102.5 FM or The Voice of Arkansas Minority Advocacy Council