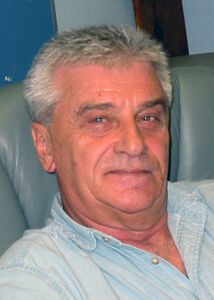 JONESBORO – Alexander Sydorenko, emeritus professor of history and a native of Ukraine, will present the 2022 Corinne Sternheimer Greenfield Lecture at Arkansas State University.

Speaking on “Russia and Ukraine:  A Civilizational Perspective,” Dr. Sydorenko’s timely presentation will begin at 7 p.m. Tuesday, March 29, in the auditorium of the Reng Student Union. Sydorenko retired in December 2020, having served for 48½ years as a member of A-State’s Department of History faculty.

Born in Soviet Ukraine, then occupied by the German army during World War II, he and his parents were driven out of Ukraine to Germany. His family surviving in multiple displaced people camps in Germany, were among the refugees moving westward to avoid the advancing Red Army and re-patriation to USSR.

Joining the history faculty in 1972, he taught a variety of undergraduate and graduate Russian and European courses. In 1976 he led students on a 24-day study tour of the USSR, visiting Leningrad, Moscow, Kyiv, and other localities. During this trip he visited his native village and met relatives. He also had a sabbatical in Ukraine, teaching a course at the Kyiv-Mohyla Academy.

Since the early 1990s, he has travelled throughout Ukraine more than a dozen times to present papers at scholarly conferences, to visit cities and historical sites, and see relatives. He published a book, numerous scholarly articles, and over 100 book reviews. He is a member of various scholarly organizations and is fluent in Ukrainian, Russian, Portuguese and Spanish.

In retirement he has focused on writing memoirs, including one titled “Motherland,” which he calls an attempt to come to terms with the exiled condition — the issue of a Ukrainian identity shaped by a Brazilian and American milieu while removed from the country of ancestry and kin. He is also working on a novel, “The Steppe,” dealing with the Greeks of southeastern Ukraine.

First presented in 2004, the annual Greenfield Lecture is funded by an endowment that was established by Drs. Rosalee and Raymond Weiss to honor her mother, Corinne Sternheimer Greenfield, who was born in Jonesboro in 1896. The Sternheimer family was among the first to support the state agricultural school, established in 1909, that has evolved into Arkansas State University. The Greenfield Lecture also is supported by the A-State College of Liberal Arts and Communication, which coordinates the event.

Original article source: http://www.astate.edu/news/emeritus-professor-and-ukrainian-native-alex-sydorenko-to-present-greenfield-lecture | Article may or may not reflect the views of KLEK 102.5 FM or The Voice of Arkansas Minority Advocacy Council