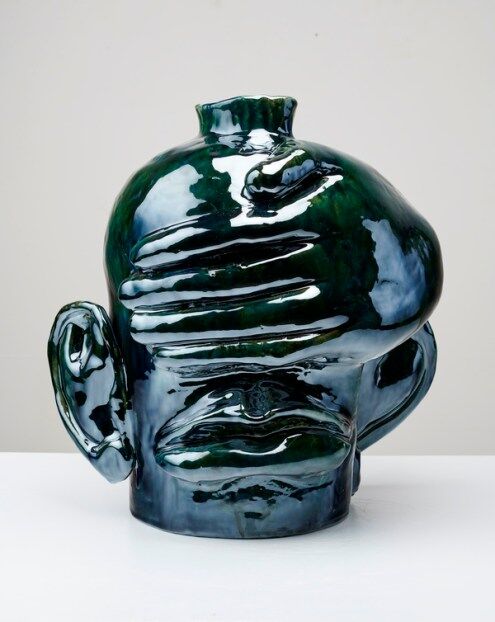 SHEBOYGAN, WI —An exhibition of ceramics by the artist Woody De Othello will be on view at the John Michael Kohler Arts Center from September 26, 2021 through September 25, 2022.

Woody De Othello: Hope Omens presents a series of nearly 20 large anthropomorphic vessels based on African spiritual objects that, among other things, address the tumultuous nature of the last year.

Woody De Othello is best known for his large-scale sculptures of familiar domestic objects, which are often imbued with a kind of human personage. For Hope Omens, he presents an entirely new body of work.

Many of the sculptures were produced using molds that Othello created during his Arts/Industry Pottery residency at the Kohler Co. factory in early 2020. While he was in residence, the world outside the factory began to shift with the beginning of the pandemic. The residency was cut short by several weeks and forced Othello to bring home some of the molds to continue his work.

“Woody De Othello’s work has always been prescient in its combination of humor, history, and composition. But the saliency of this newest body of work speaks poignantly and pointedly about the time we are living in, reaffirming the role that artists can play in articulating a kinder and more just world for us all. The Arts Center is thrilled to be showing these works for the first time,” said Laura Bickford, curator, John Michael Kohler Arts Center.

Othello draws on African nkisi, or objects that are believed to be invested with spiritual energy. Breath and breathing are ideas often expressed in Othello’s vessel-like forms covered in mouths. Many of his new works feature hands and arms, evoking embrace and consolation, or ears and mouths, offering meditations on listening, hearing, and being present.

“Working has allowed me to process what is going on, with the convergence of the pandemic and personal interest at this moment in time,” said Othello. “I am moved and inspired by many elements—African ceramics, jazz music, Afrofuturism, and a brighter color palette. I also have been thinking about how vessels can be metaphors for emotional and physical space, and how we find comfort.”

A new sound piece by Oakland, CA, musician Cheflee will accompany Othello’s sculptures. Made in response to the work in the exhibition, the ambient composition is designed to subtly guide the viewer through the space, creating an immersive environment. Some of the vessels will emanate sound from within, as if imbued with a spirit.

Woody De Othello was born in Miami, Florida, in 1991. His first solo museum exhibition was held in 2019 at the San Jose Museum of Art. That same year his work was on view at Art Basel Miami Beach, and in 2018 his work was included in the FRONT International Cleveland Triennial for Contemporary Art. Gallery exhibitions of his work have been held in New York, London, San Francisco, and Los Angeles. His work is in the collections of the Los Angeles County Museum of Art; San Francisco Museum of Modern Art; San Jose Museum of Art; and Institute of Contemporary Art, Miami. He holds a B.A. from Florida Atlantic University and a M.F.A from California College of Arts. Othello lives and works in Oakland, CA.

The John Michael Kohler Arts Center located north of Milwaukee in Sheboygan, Wisconsin, was founded in 1967. It is dedicated to making innovative exhibitions and arts programming accessible to a broad audience. Central to its mission is promoting understanding and appreciation of the work of self-taught and contemporary artists through original exhibitions, commissioned works of art, performing arts programs, and community arts initiatives. Since the 1970s, JMKAC has preserved, studied, and exhibited works by art-environment builders and has earned a worldwide reputation for its work in this area. Art environments involve an individual significantly transforming their surroundings—for example, their home or yard—into an exceptional, multifaceted work of art.

Original article source: https://goodblacknews.org/2021/09/12/art-woody-de-othellohope-omens-exhibition-of-ceramics-at-john-michael-kohler-arts-center-in-wi-opens-9-26/ | Article may or may not reflect the views of KLEK 102.5 FM or The Voice of Arkansas Minority Advocacy Council