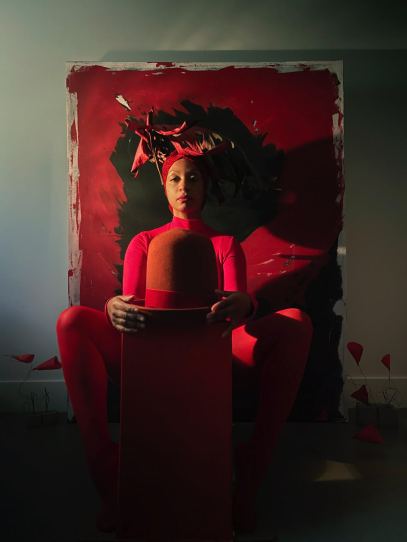 NEW YORK, NY— The International Center of Photography (ICP) presents a powerful exhibition focusing on the work of five emerging Black artists who have turned the lens inward to explore and capture the “unseen” moments of their lives during a time of unprecedented change.

On view through January 10, 2022, INWARD is curated by Isolde Brielmaier, Ph.D., ICP’s curator-at-large, and newly-appointed Deputy Director for the New Museum.

Although a number of these photographers have worked on assignment for major publications such as the New York Times, Vogue, Vanity Fair and Time, the exhibition offers a rare opportunity to see their artistic and personal work in their first museum exhibition.

The photographers showcased in INWARD use a range of manual and digital image-making tools in their individual practices—for this exhibition, they have created the photographs using iPhone.

The resulting images move beyond the endless scope of the constructed selfie to examine the intimate interactions and inner thoughts that make up their daily experiences as artists in a time of Covid-19, Black Lives Matter, and the 2020 U.S. election.

“The five artists featured in INWARD provide a thought-provoking window into their interior lives,” said curator Isolde Brielmaier. “The revealing new photographs explore intimate thoughts and personal relationships with great honesty, as the artists delve deep into the new reality and challenges of our contemporary lives at a time of global introspection.”

Exhibition Overview
Smartphones have often been used to generate images of public space and events in the broader outside world. iPhone has democratized image-making, and more recently, has been widely utilized as an impactful outward-facing tool to capture the human side of this particular moment of upheaval and turmoil. In INWARD, the artists reverse the focus to document their inner lives, and in the process show the full potential of iPhone in a fine art setting.

Revealing deep self-reflection, the work of Djeneba Aduayom explores her inner thoughts and subjectivity. As an introvert, she was at ease at home, sitting still, and being quiet in the company of herself during the pandemic. This quiet confidence can be seen in her self-portraits, in which she poses for the camera and directly gazes at the viewer. These images are punctuated by smaller, more abstract “studies” of objects and the human form of the artist’s own body.

Much of Arielle Bobb-Willis’s work is born out of her experience battling depression from an early age. She manipulates color, shape, form, and light, giving way to abstract images that reference ideas of the beautiful, the strange, isolation, and belonging. Influenced by painting, her use of bright colors speaks to the artist’s desire to claim power and joy in the face of confusion, sadness, and uncertainty.

Quil Lemons presents self-portraits from his series entitled Daydreams, 2021, which document his very personal journey, a process of self-exploration and self-validation: “As a Black queer man, there is no space for me, so I constantly carve one,” he states. He confidently defines his racial and gender identity in ways that allow for the intertwined, co-existence of both. His work visually articulates both self-assurance and the ongoing vulnerability with which he contends.

The work of Brad Ogbonna is comprised of a broad series of portraits of family, friends, and himself. In the style of some of the most important historical West African portrait photographers, such as Malick Sidibé, Meissa Gaye, Seydou Keïta and others, he has created, in collaboration with his friends and family members, a series of intimate portraits that underscore family history and relationships with a strong reference to the artist’s Nigerian culture as well as his late father. “I didn’t think much about the past until my Dad died,” said Ogbonna. “Shortly thereafter I inherited his first photo album filled with photos from his youth spent in Nigeria. At the time those images felt like a portal to the not-so-distant past and left me with many more questions than answers. I was enthralled by the mystery of it all.”

Isaac West is inspired by his girlfriend Naima in his series entitled Love, 2021. He focuses on the small ways in which human interactions, gestures, and expressions both encapsulate and demonstrate larger ideas about love, intimacy, and care. Through his strikingly bold colors and stark lines and use of light, as well as the strong articulation and centering of Blackness, he highlights everyday acts of kindness—grooming, eating, playing—in order to underscore these

About the Artists
Djeneba Aduayom, @djeneba.aduayom
Informed by her career as a professional dancer, Djeneba Aduayom progressed into photography and brought her love of travel, movement and emotive performance into her imagery and subsequent directing work. Drawing inspiration from her cultural mix of French, Italian and African heritage, her concepts and artistic expression are rooted in her personal exploration of the inner worlds of her imagination. In 2020, Aduayom received The One Club for Creativity One Show gold award for her conceptual fashion series “A Pas de Deux” in collaboration with New York magazine’s The Cut. Her portraits for The New York Times Magazine’s “The 1619 Project” were honored by the International Center of Photography’s 2020 Infinity Awards in the Online Platform and New Media category. The American Society of Magazine Editors’ 2020 Awards also selected Aduayom’s Billboard portrait of St. Vincent as “Best Profile Photograph.” Aduayom is now based just outside of Los Angeles, CA.

Arielle Bobb-Willis, @ariellebobbwillis
Born and raised in New York City, with pit stops in South Carolina and New Orleans, photographer Arielle Bobb-Willis has been using the camera for nearly a decade as a tool of empowerment. Battling depression from an early age, Bobb-Willis found solace behind the lens and has developed a visual language that speaks to the complexities of life: the beautiful, the strange, belonging, isolation, and connection. Inspired by masters like Jacob Lawrence and Benny Andrews, Bobb-Willis applies a “painterly” touch to her photography by documenting people in compromising and disjointed positions as way to highlight these complexities. Her photographs are all captured in urban and rural cities, from the South to North, East to West. Bobb-Willis travels throughout the U.S. as a way of finding “home” in any grassy knoll, or city sidewalk, reminding us to stay connected and grounded during life’s transitional moments.

Quil Lemons, @quillemons
Quil Lemons is a New York-based photographer with a distinct visual language that interrogates ideas around masculinity, family, queerness, race, beauty, and popular culture. His inaugural series GLITTERBOY (2017) introduced Lemons to the world and started a dialogue that would act as a common thread through much of his work to come. In it, he dusted black men with glitter to combat the stereotypes and stigmas placed upon their bodies. This concept of challenging what is acceptable for the black male body developed even further in BOY PARTS (2020). Simultaneously, Lemons began an exploration of the black family portrait with his series PURPLE (2018) and project WELCOME HOME (2018). Images from both projects gave an intimate glimpse into his home life and the modern black American family structure in Philadelphia. Lemons has previously exhibited at Contact Festival, Toronto, 2018; Kuumba Festival, Toronto, 2019; and Aperture, NY 2019. His work has appeared on the cover of Vanity Fair, and publications including Variety, Vogue, and the New York Times.

Brad Ogbonna, @bradogbonna
Brad Ogbonna was born and raised in Saint Paul, MN, and currently lives and works in Brooklyn, NY. A first generation Nigerian-American and a self-taught photographer, his work focuses on the black experience: his own, as well as the many different iterations he has seen while traveling domestically and abroad as a member of the diaspora. His work has appeared in publications such as The New York Times, The Atlantic, Forbes, Bloomberg BusinessWeek, and New York magazine, and he frequently collaborates with the artist Kehinde Wiley. In 2019, Ogbonna’s work was featured at the Walker Art Center in Minneapolis.

Isaac West, @isaacwest
Isaac West is a Liberian-born, U.S.-based photographer, artist, and creative director who specializes in conceptual art and minimalism. West’s luminous portraits evoke a contemporary regality. In 2018, West photographed two issues for Paper magazine, “Higher Ground” (web issue) and “West’s World” (spring print issue). In 2019, West photographed the actress Zendaya for the cover of the Summer print “Extreme” issue of Paper, and West was also named one of Paper magazine’s “100 People Taking Over 2019.” West photographed Parker Kit Hill for the spring 2019 print issue cover of Funk Magazine, a magazine dedicated to the LGBT community. Vogue Italia featured West’s third-biggest photography project called “8Minutes & 46Seconds” as a full spread in their 2020 summer print issue. West’s work was featured in the Aperture Foundation’s 2020 exhibition The New Black Vanguard in New York, NY, which then traveled to Australia and Qatar in 2021.

For more information about ICP: https://www.icp.org/about

Ticket information:  Admission to ICP is by timed ticketed entry only to ensure limited capacity and other safety standards are met. Tickets can be reserved online at icp.org/tickets. updated Visitor Information and Accessibility guidelines and policies.

Original article source: https://goodblacknews.org/2021/12/30/art-photographers-djeneba-aduayom-brad-ogbonna-isaac-west-arielle-bobb-willis-and-quil-lemons-exhibit-inward-at-the-international-center-of-photography-in-ny-until-1-10-22/ | Article may or may not reflect the views of KLEK 102.5 FM or The Voice of Arkansas Minority Advocacy Council