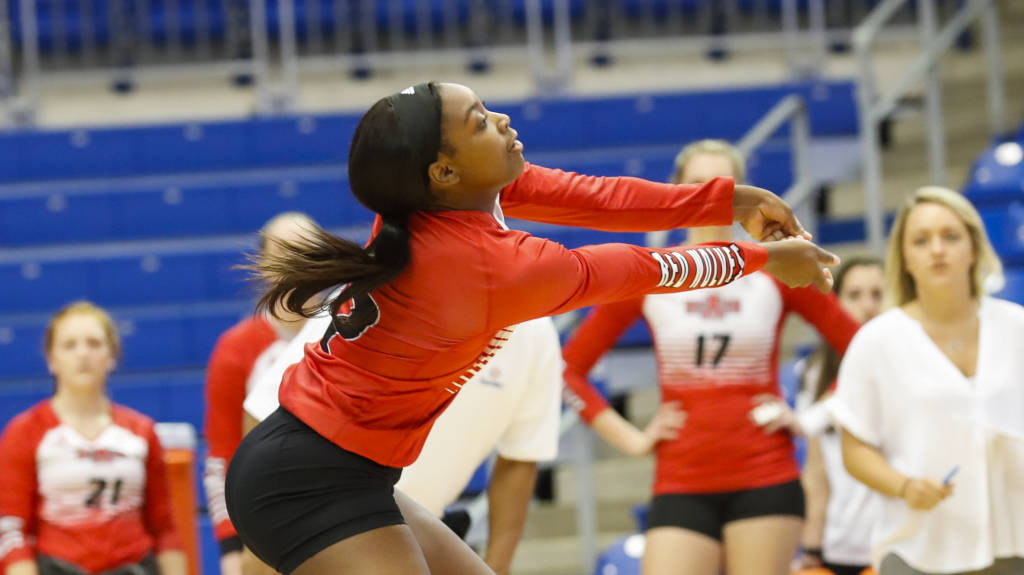 With the loss A-State falls to 10-8 overall and 2-3 in Sun Belt Conference play, while Coastal Carolina improves to 4-7 overall and 3-0 in the league.

Carlisa May led the way for the Red Wolves offensively with her sixth double-double on the season, recording 20 kills and 10 digs. Junior Madison Turner added 13 kills as A-State had 55 team kills in the match.

“They were just a play or two better than us tonight,” A-State head coach David Rehr said. “We were in every set, but other than the first set, every time we made a run they made a play to get us out of rhythm. We’ve played three straight matches that have been very competitive and each time we’ve come up just a bit short. We did a lot of good things tonight, but we need just a little bit more to get back to where we need to be.”

Trailing 20-14 in the first set, the Red Wolves went on a 10-4 run to tie the contest at 24-24 and force a Coastal Carolina timeout.  Still holding the momentum, A-State scored the final two points coming out of the timeout to complete the comeback and take a 1-0 lead in the match.

The Red Wolves kept it close in the second set, using a six-point run to force a Coastal Carolina timeout with the score 24-21 in favor of the Chanticleers . Coastal was able to stop the Red Wolves’ surge at that point, going on to take the set 25-22 and even the match.

While posting its best attack percentage of the night in the third set at .257 and having the score tied 20-20 late, A-State was hurt by two attack errors and one serving miscue that the Chanticleers took advantage of to claim 25-20 a win.

The fourth set saw CCU jump out to a quick 3-0 advantage, and the Chanticleers eventually extended their lead to as much as six points at 19-13.  However, A-State went on a 6-1 run to pull back within 20-19.  The Red Wolves were still within one point of tying the game at 22-21, but couldn’t get any closer as Coastal Carolina was able to escape with a 25-21 victory.

A-State is set to play Appalachian State Sunday. The first serve is set for 11:30 a.m. from Boone, N.C.

Original article source: http://www.astateredwolves.com//ViewArticle.dbml?DB_OEM_ID=7200&ATCLID=211774952 | Article may or may not reflect the views of KLEK 102.5 FM or The Voice of Arkansas Minority Advocacy Council