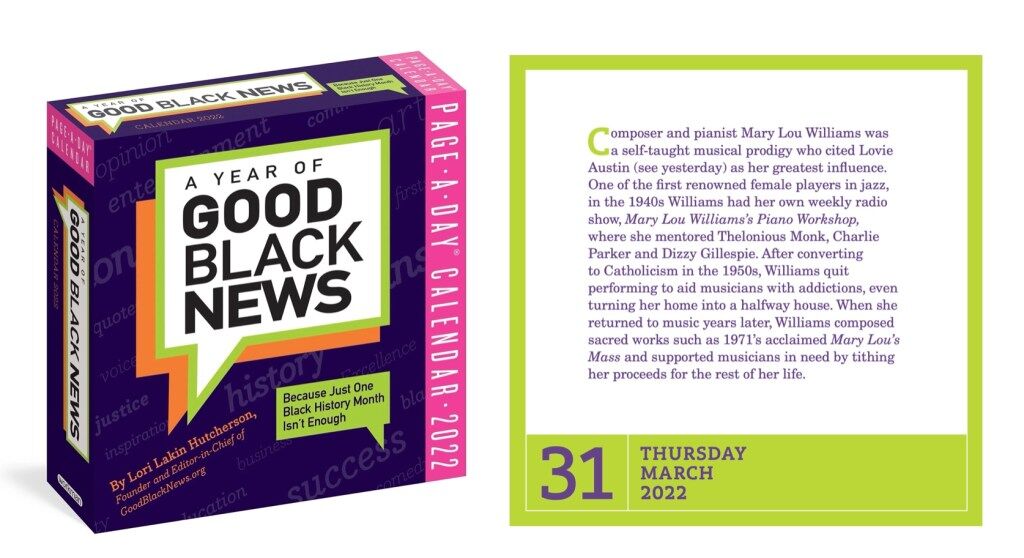 We close out #WomensHistoryMonth with Mary Lou Williams, one of the most talented and revered pianists, composers, and arrangers in jazz music history.

Williams, who grew up in Pittsburgh, was a self-taught musical prodigy who cited Lovie Austin, who we did a daily drop on yesterday, as her greatest influence.

Since 1996, The Kennedy Center in Washington DC has held an annual Mary Lou Williams Jazz Festival – this year’s will be held in May. To hear our Drop on her, press play:

Hey, this Lori Lakin Hutcherson, founder and editor in chief of goodblacknews.org, still a little stuffed up, but here to share with you a daily drop of Good Black News for Thursday, March 31st, 2022, based on the “A Year of Good Black News Page-A-Day Calendar” published by Workman Publishing.

Born in 1910, composer and pianist Mary Lou Williams was a self-taught musical prodigy who cited Lovie Austin, who we did a daily drop on yesterday, as her greatest influence.

One of the first renowned female players, composers and arrangers in jazz, Williams was a working musician by the age of 15, and by 18 had joined the Andy Kirk Orchestra based out of Kansas City, Missouri.

By the 1940s she had her own weekly radio show, Mary Lou Williams’s Piano Workshop, where she mentored Thelonious Monk, Charlie Parker and Dizzy Gillespie.

In 1945, Williams composed one of her most noted works, Zodiac Suite, which she said was inspired by the astrological signs of famous friends in the jazz world. “Aries” which you are hearing now, was inspired by Billie Holiday and Ben Webster.

After converting to Catholicism in the 1950s, Williams quit performing to aid musicians with addictions, even turning her home into a halfway house.

When she returned to music years later, Williams composed sacred works such as 1971’s acclaimed Mary Lou’s Mass and supported musicians in need by tithing her proceeds for the rest of her life.

Even with her self-imposed break, in her lifetime, Williams composed over 350 songs and recorded over 35 albums. Williams passed in 1981 and in 1983, Duke University established the Mary Lou Williams Center for Black Culture.

And since 1996, The Kennedy Center in Washington DC has held an annual Mary Lou Williams Jazz Festival. The next one will be held this May.

And if you really want to deep dive, like I know I do, you can listen to and read all seven tapes and transcripts of Mary Lou Williams’ interviews from the 1973 Jazz Oral History project where her archives are stored at Rutgers University.

And, of course, you can buy or stream her music on Apple Music or Spotify. Links to these sources and more are provided in today’s show notes and in the episode’s full transcript posted on goodblacknews.org.

Excerpts from “Aries” from Zodiac Suite and “Credo” (Instrumental) from Mary Lou’s Mass by Mary Lou Williams are included under fair use.

Original article source: https://goodblacknews.org/2022/03/31/womenshistorymonth-mary-lou-williams-piano-prodigy-and-jazz-music-legend-listen/ | Article may or may not reflect the views of KLEK 102.5 FM or The Voice of Arkansas Minority Advocacy Council