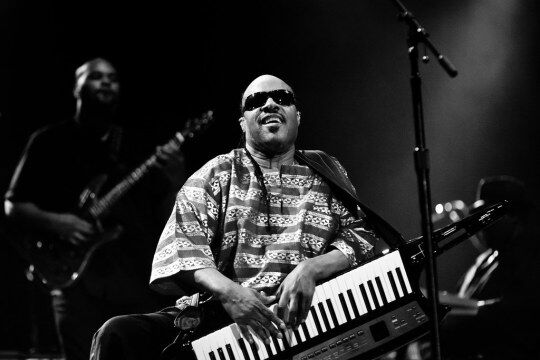 If you are a regular listener of Good Black News’ Music Monday playlists, we’re sure you’ve noticed by now that we’ve got some serious Stevie Wonder fans in the house. In 2020, we even celebrated his 70th birthday with a whole month of fantastic playlists (some links below).

And now that Mr. Wonder’s birthday week again (on this Friday the 13th), we’ve got a new playlist to share – this one built around songs that he composed for other artists – it’s called “Written By Wonder, First Sung By Another”:

This playlist is comprised of over 90 songs spanning from the mid-60s when he was still just a teenage songwriter, up through the list’s most recent composition, a 2011 release from smooth jazz vocalist Maysa called “Have Sweet Dreams.”

Many people already know of the hits Stevie wrote for others – classics such as The Spinners’ “It’s A Shame,” Jermaine Jackson’s “Let’s Get Serious,” Third World’s “Try Jah Love,” Rufus feat. Chaka Khan’s “Tell Me Something Good,” and of course, Smokey Robinson & The Miracles’ “The Tears of a Clown.”

But his writing legacy goes so much deeper than that.

Starting in the mid-60s when he was just a teen, Little Stevie Wonder composed songs recorded by nearly all his major labelmates, including tracks for The Supremes, The Temptations, The Four Tops, The Marvelettes, Martha Reeves & the Vandellas, The Miracles and Marvin Gaye.

Most were shared credits with co-writers such as Clarence Paul (his main Motown producer in the ‘60s), Morris Broadnax, Ivy Jo Hunter, and Mickey Stevenson.

One track, “All I Do Is Think About You,” remained an obscure Tammi Terrell 1966 album track until Stevie actually reached back and recorded a vastly updated version of the song as “All I Do” his 1980 album Hotter Than July.

Several other ‘60s tracks on our playlist remained in vaults until they were unearthed in more recent decades, including Marv Johnson’s “Let’s Talk It Over” and J.J. Barnes’ “Everybody Needs Somebody (I Need You).”

Barnes’ track was actually released by Stevie himself in the ‘60s, but had been recorded (and shelved) first by Barnes.

This was the converse of the situation with his celebrated Aretha Franklin hit, “Until You Come Back to Me (That’s What I’m Gonna Do)” – which was actually recorded (and shelved) by Wonder himself in the late ‘60s, before being offered to Franklin, who sang the first released version of this iconic track.

By 1970/1971, Stevie was no longer a teenager and was stepping out on his own as both a writer and producer. Fans are familiar with his songs with then girlfriend-turned-first-wife Syreeta Wright, beginning in 1972.

Syreeta’s first two albums, both produced by Stevie, are wonderful – and all Stevie’s compositions from them are contained in this playlist (with the bulk of the 2nd album placed at the end of our playlist).

But even earlier than his Syreeta productions, Wonder wrote and produced two songs for Martha Reeves & The Vandellas during these emerging independent years – “Let Me Fall in Love with You” (co-written with Syreeta) and “Talking ‘Bout Love.”  Both remained in the archives until 2005!

By the early to mid-‘70s, when Wonder was the hottest artist around, Stevie songs were in demand, even by acts from outside the Motown stable.

After hitting the top of the R&B charts with Jermaine Jackson’s “Let’s Get Serious” – the #1 R&B hit of 1980 – Stevie continued to write with some frequency for other artists – ranging from compositions for celebrity-fueled albums by the likes of Eddie Murphy and Raven Symone, to songs for some of the most celebrated pop/adult contemporary artists of all time, like The Beach Boys, John Denver, and Dionne Warwick.

A particular mark of Wonder’s songwriting chops may be that his songs were frequently picked by artists who were often major songwriters themselves.

And then, in 1988, Stevie first collaborated with filmmaker Spike Lee. Although later Stevie would go on to create a whole solo album around the soundtrack to Jungle Fever and also contribute songs to the soundtrack for Bamboozled, his first collaboration with Lee started with a beautiful track Stevie wrote for School Daze called “I Can Only Be Me,” sung by Keith John, son of soul legend Little Willie John (and also a longstanding member of Stevie’s support band).

On this playlist, we’ve ordered the songs roughly in chronological order, kicking off with a few of his bigger hits for others, but then focusing on the ‘60s, ‘70s, and then ‘80s.

And we’ve kept to tracks that were truly sung or performed by other artists only – not songs that were full duets with Stevie himself. (Those songs are worth exploring too, including songs with Whitney Houston, Julio Iglesias and Babyface, among others.)

We all may lament that we haven’t seen a new album from Stevie in over 16 years. But there are enough Stevie songs here, many of them also produced by him, to comprise another 8-9 albums worth of material! So dive in.

During this Stevie Wonder birthday week, it’s time again to marvel at the amazing talents of this musical genius, which deserve exploration beyond just the albums released under his own name.

For those interested in other Stevie Wonder playlists and articles from GBN’s Music Monday archives, here are some additional links:

Original article source: https://goodblacknews.org/2022/05/09/music-monday-written-by-wonder-first-sung-by-another-a-stevie-wonder-composed-playlist-listen/ | Article may or may not reflect the views of KLEK 102.5 FM or The Voice of Arkansas Minority Advocacy Council