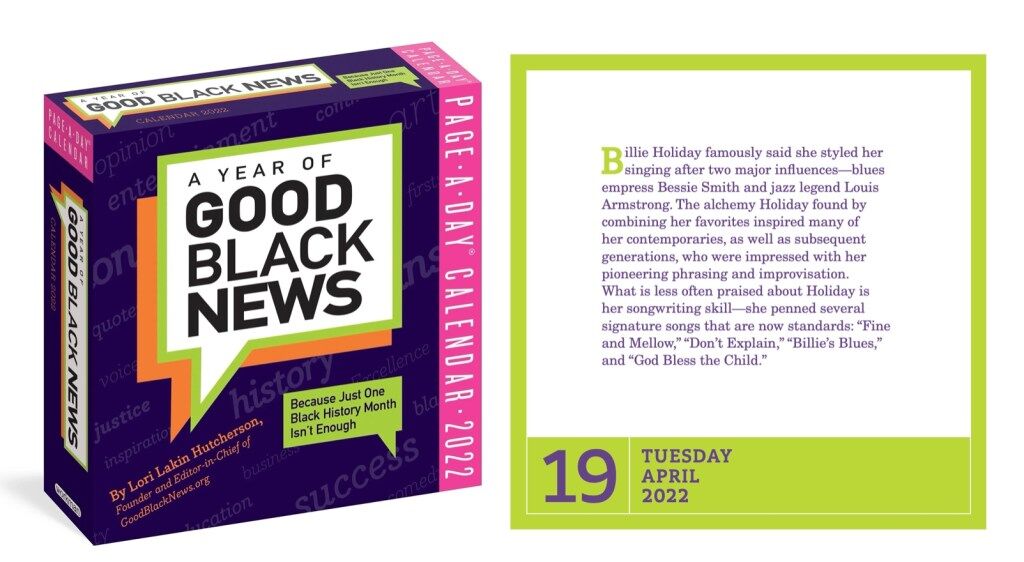 In continued celebration of #JazzAppreciationMonth, today we drop in on Billie Holiday, the singer and artist who not only influenced peers and progeny alike with her innovative interpretation of and phrasing in songs, but also composed several of her signature songs which became jazz and blues standards in the decades that followed.

To read about Holiday, read on. To hear about her, press PLAY:

Hey, this is Lori Lakin Hutcherson, founder and editor in chief of goodblacknews.org, here to share with you a daily drop of Good Black News for Tuesday, April 19th, 2022, based on the “A Year of Good Black News Page-A-Day Calendar” published by Workman Publishing.

The alchemy Holiday found by combining her favorites inspired many of her contemporaries as well as subsequent generations of singers, who were impressed with her pioneering phrasing and improvisation.

What is less often praised about Holiday is her songwriting skill. She wrote several signature songs that are now standards. Let’s start with “Fine and Mellow,” which Holiday first recorded in 1939:

[Excerpt of “Fine and Mellow”]

Then there was “Don’t Explain” written with Arthur Herzog, Jr. about an unfaithful partner:

And in 1936, Holiday contributed the B-side to her cover of “Summertime” on the Vocalion label. A song she would revisit during different times in her career and became one of her stand outs, named for Lady Day herself, it’s “Billie’s Blues”:

With Herbie Nichols she wrote the title track of her 1956 album, “Lady Sings the Blues”:

[Excerpt of “Lady Sings the Blues”]

And the signature song, which Holiday’s autobiography says came out of an argument with her mother over money on which she partnered the Arthur Herzog once again, “God Bless the Child”:

[Excerpt of “God Bless the Child”]

What can be said about Billie Holiday, her life and her work, is vast.

I’m only dropping in here on a small sliver of the story, this framework of songs she created either solo or collaboratively, but just in case this is anyone’s first exposure to Billie Holiday, I do want to highly recommend you check out other signature Holiday recordings like “Strange Fruit” and her indelible interpretations of songs like “Willow Weep for Me,” “I Cover The Waterfront” or “Them There Eyes.”

Honestly, just go to whatever streaming service you use or go on YouTube to listen to Billie Holiday essentials – whatever you encounter it’s just kind of impossible to go wrong.

I mean, I wouldn’t want you to start with The Last Recording, which is her final studio album from 1959 when she was ill and just months from the end of her life.

But even if somehow you did that, even hearing that will make you want to dig deeper on this superlative artist and hear more. Because she didn’t just sing to sing or make hits. In fact, when she was asked, this is what Holiday herself had to say about that:

“There’s nothing happening out here with the tunes these days, you just can’t get into them you can’t feel them. Unless you do novelty things, write cute novelty things. But I don’t sing novelty. The things that I sing have to have something to do with me and my life and my friends lives, it has to have a meaning.”

To learn more about Billie Holiday, an absolute must read fully recommended by me is If You Can’t Be Free, Be A Mystery: In Search of Billie Holiday by Farah Jasmine Griffin.

It was written in 2001 and when I read it two years ago, it was thrilling because it was exactly the book I’d dreamed of reading about Holiday. And was totally relieved because it meant I didn’t have to figure out how to write it.

I personally first fell in love with Billie Holiday and her music when I was in college and even wrote a little bit about her as part of my larger senior thesis on jazz autobiography.

And from that time on, I was wholly dissatisfied by the scholarly works available on Billie Holiday. Mainly because she was always framed as this tragic, victimized figure… even in Ken Burns‘ mostly excellent documentary on the history of jazz, the very first image you see of Billie Holiday in particular, is a clip of her mistreatment in a 1935 film she was in with Duke Ellington called Symphony in Black.

Where she gets shoved to the ground in an alley by a man who doesn’t want anything to do with her. Griffin’s book was the first I read that takes Holiday’s artistry seriously and put the challenges of her personal life in context instead of as some overriding tragic narrative. To quote from Griffin:

“Billie Holiday was a musical genius… For years jazz was not considered a “serious” art form. Once its seriousness was granted, only male musicians were considered geniuses. Few today would deny the “genius” of Charlie Parker or Miles Davis.

After Holiday’s death a small group of white male jazz critics began to discuss her talent in similar terms. For them, her genius was undisciplined, and sacrificed for her insatiable appetites; furthermore, these writers all suggest that Holiday herself had no understanding of her own gifts.

Following the Holiday of these portraits there emerged a Holiday who was semi-literate, read only comic books, and was barely capable of understanding the meaning of the song “Strange Fruit.”… It is impossible for a gifted jazz musician to lack intelligence. Artistic success in this form requires talent, intelligence and discipline.”

You can also check out the 2019 documentary Billie, now streaming on Hulu, watch clips of Holiday in the 1947 movie New Orleans on YouTube, where she performs solo and with her Louis Armstrong, take in Andra Day’s performance as Holiday in 2021’s The United States vs. Billie Holiday, also on Hulu.

You can also watch several performance videos of Billie Holiday on YouTube such as her classic 1957 performance of “Fine and Mellow” on CBS’s Sound of Jazz.

You can also listen to the four-part podcast from 2021 on Audible, Billie Was a Black Woman, and of course, buy or stream as much Billie Holiday music as you can. Links to these sources, and more are provided in today’s show notes and in the episode’s full transcript posted on goodblacknews.org.

This has been a daily drop of Good Black News, written, produced and hosted by me, Lori Lakin Hutcherson.

All excerpts of Billie Holiday’s music are included under Fair Use.

If you like these Daily Drops, follow us on Apple, Google Podcasts, RSS.com, Amazon, Spotify or wherever you get your podcasts. Leave a rating or review, share links to your favorite episodes, or go old school and tell a friend.

Original article source: https://goodblacknews.org/2022/04/19/lady-writes-the-blues-billie-holidays-singing-and-songwriting-artistry-listen/ | Article may or may not reflect the views of KLEK 102.5 FM or The Voice of Arkansas Minority Advocacy Council