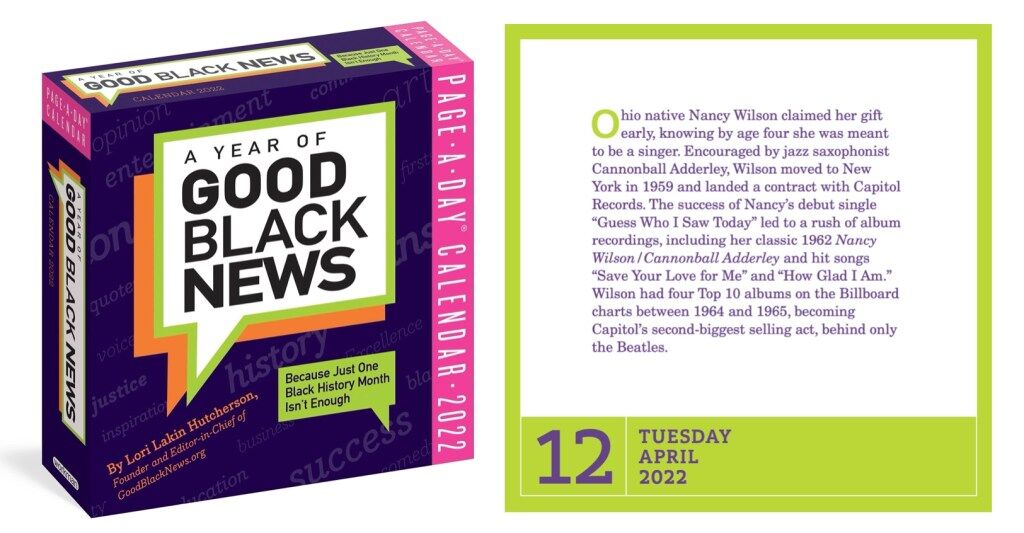 In continued celebration of #JazzAppreciationMonth, today we drop in on the underappreciated yet cherished and deeply talented song stylist Nancy Wilson, who was at one time in the 1960s the second most popular act on Capitol Records behind only the Beatles.

To read about Wilson, read on. To hear about her, press PLAY:

Hey, this is Lori Lakin Hutcherson, founder and editor in chief of goodblacknews.org, here to share with you a daily drop of Good Black News for Tuesday, April 12, 2022, based on the “A Year of Good Black News Page-A-Day Calendar” published by Workman Publishing.

Ohio native Nancy Wilson claimed her gift early, knowing by age four she was meant to be a singer. Encouraged by jazz saxophonist and bandleader Julius “Cannonball” Adderley, Wilson moved to New York in 1959 and landed a contract with Capitol Records.

The success of Nancy’s debut single “Guess Who I Saw Today,” led to a rush of album recordings, and to that tune becoming one of the signature songs of her career:

[Excerpt of “Guess Who I Saw Today”]

[Excerpt of “Save Your Love for Me”]

Wilson won her first Grammy for that song and had four top 10 albums on the Billboard charts between 1964 and 1965, becoming during that period Capitol Records’ second-biggest selling act behind only the Beatles.

Wilson released more than 70 albums in her five-decade recording career, and won two more Grammys 40 years after her first win, both for Best Jazz Vocal Album, in 2005 for R.S.V.P. (Rare Songs, Very Personal) and 2007 for Turned to Blue.

In 2004, Nancy Wilson was honored as a Jazz Master by the National Endowment for the Arts, and for her work as an advocate of civil rights, which included participating in the 1965 Selma to Montgomery march in Alabama.

She received an award from the Martin Luther King Jr. Center for Nonviolent Social Change in 1993 and also in 1998 she won an N.A.A.C.P. Hall of Fame Image Award.

Although Wilson was lauded as a jazz vocalist, she preferred to think of herself a song stylist, as she drew from a variety of influences, which she spoke about in detail during an interview on grammys.com:

“So, consequently, I was exposed to male influences. From early on, I heard Nat Cole I heard [?????] Jackson and Louis Jordan – loved Louis Jordan. I heard Billy Billy, Mr. B. I mean, he was just, I mean, my father thought Billy Eckstine was like, couldn’t – he walked on water. He loved B. And I heard Little Jimmy Scott with Lionel Hampton‘s big band. I would imagine that was when I was around 10. So basically, it was all male. And, and not gospel. I heard Jimmy Cleveland, James Cleveland, and C.L. Franklin, and his choir from my mom used to play that. So, I got to hear it all. And I enjoyed all of it. And then of course, I became a teenager. I mean, I was allowed to go out.

And there was a jukebox where I heard Little Esther, and I heard Little Miss Cornshucks. I heard LaVern Baker. I definitely heard Dinah and I heard Ruth Brown – I used to love Ruth Brown. That was where I got the exposure to R&B females. Was a quite a while – I think I was pretty much almost grown like 15 when I became exposed to – Sarah had some hit pop songs and I heard Sarah Vaughan and that I loved. “I Ran All the Way Home” was my big song. Also one of my big numbers was the Ravens tune called “You Saw Me Crying in the Chapel.”

So I sang these songs in variety shows and I’m like ninth grade, 10th grade, so, these were the things that really made things happen for me. The fact that I did not I had no idea that you were supposed to be afraid, or that you needed to be nervous. Because to me that had no part of what I did. I was not nervous about it at all. Loved to sing – loved the lyrics to songs always. Yeah.”

To learn more about Nancy Wilson, check out the Jazz Profiles series she hosted on National Public Radio, read her 2007 interview on the National Endowment for the Arts website, watch her 1994 interview on Detroit Black Journal on YouTube, her 1962 appearance on Jazz Scene USA currently on YouTube, an 80-song Nancy Wilson playlist curated by yours truly on Apple Music or Spotify, and of course, buy or stream as much Nancy Wilson music as you can online.

Links to these sources and more provided in today’s show notes and the episode’s full transcript posted on goodblacknews.org.

All excerpts of Nancy Wilson’s music included are permitted under Fair Use.

Original article source: https://goodblacknews.org/2022/04/12/celebrating-vocalist-nancy-wilson-for-jazzappreciationmonth-listen/ | Article may or may not reflect the views of KLEK 102.5 FM or The Voice of Arkansas Minority Advocacy Council