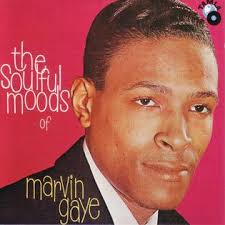 Marvin Gaye is known worldwide as a key R&B, soul and pop music innovator from the 1960s on. But what may not be well known about Gaye is that his earliest musical ambitions were to sing and perform jazz.

As it’s #JazzAppreciationMonth in addition to what would have been Gaye’s 83rd birthday, we  honor his contributions to the genre in today’s daily drop. To hear it, press PLAY:

Hey, this Lori Lakin Hutcherson, founder and editor in chief of goodblacknews.org, here to share with you a bonus daily drop of Good Black News for Saturday, April 2nd, 2022, based on the format of the “A Year of Good Black News Page-A-Day Calendar” published by Workman Publishing.

The incomparable musician and artist Marvin Gaye was born #onthisday in 1939 in Washington D.C.

From the 1960s on, he helped define the sound of R&B, soul and pop music, as well as blazed a trail for singer-songwriter concept albums exploring personal and social issues in depth with his classic 1972 LP What’s Going On.

But what may not be well known about Gaye, even though he started his professional career in the 1950s as a doo wop singer in the New Moonglows with Harvey Fuqua, it’s that his earliest musical ambitions for himself were to be a jazz singer and player in the ilk of Nat King Cole.

When Fuqua moved to Detroit in 1960, Gaye followed and soon signed his own solo contract with Motown subsidiary Tamla Records.

And even though his maiden release was titled The Soulful Moods of Marvin Gaye, as Berry Gordy had other ideas in mind for Gaye than Gaye had, 9 of the 11 tracks on it were, at Gaye’s insistence, jazz standards, such as “My Funny Valentine”:

[Excerpt of “My Funny Valentine”]

and “How High The Moon”:

[Excerpt of “How High The Moon”]

Even though Gaye’s first album and the singles released from it didn’t sell well, the title track of his next album, That Stubborn Kind of Fellow became a Top 10 R&B hit and the trajectory of Gaye’s musical path in the public’s – and Berry Gordy’s — perception was set.

But Gaye, still a lover of jazz, returned right to it on his 1964 release When I’m Alone I Cry, this time with way better production value and input from respected jazz musicians and arrangers Melba Liston and Ernie Wilkins. The album starts with Gaye’s smoldering version of “You’ve Changed”:

The LP also includes Gaye’s takes on “I’ll Be Around”:

“I’ve Grown Accustomed to Her Face”:

[Excerpt of “I’ve Grown Accustomed to Her Face”]

And “Because of You”

[Excerpt of “Because of You”]

In 1965, Gaye even did a tribute album to Nat “King” Cole after Cole’s passing called A Tribute to the Great Nat “King” Cole where Gaye covered “Straighten Up and Fly Right”:

[Excerpt of “Straighten Up and Fly Right”]

[Excerpt of “It’s Only a Paper Moon”]

and, of course, “Unforgettable”:

After this album, the majority of Gaye’s recordings were contemporary soul, pop and R&B, even though he still managed to include a gorgeous, bluesy remake of “One for My Baby (And One for the Road)” on his 1966 The Moods of Marvin Gaye LP:

[Excerpt from “One for My Baby”]

Only after Marvin Gaye’s untimely passing in 1984, did more of his jazz-influenced recording sessions from the late 1960s and 1970s come to light on the posthumous albums Romantically Yours, which was issued in 1985 and Vulnerable which came out in 1997. On those you can hear Gaye’s takes on “I Won’t Cry Anymore”:

[Excerpt from “I Won’t Cry Anymore”]

His experimental version of “Shadow of Your Smile”:

[Excerpt from “Shadow of Your Smile”]

[Excerpt from “Funny, Not Much”]

And the arresting “I Wish I Didn’t Love You So” which seems to capture every nuance of Marvin Gaye’s voice, style and innovations across all the genres he loved:

[Excerpt from “I Wish I Didn’t Love You So”]

Even though Gaye’s indelible legacy was forged from different genres of music entirely, Gaye also gave us much to appreciate about him in the realm of jazz.

To learn more about Marvin Gaye and his jazz leanings, check out the “Standards of Marvin Gaye” episode of WFIU’s weekly music show Afterglow hosted by Mark Chilla, read Divided Soul: The Life of Marvin Gaye biography by David Ritz and of course, stream or buy all of the albums mentioned during this drop to hear even more of Marvin Gaye’s forays into jazz.

Links to these sources are provided in today’s show notes and in the episode’s full transcript posted on goodblacknews.org.

This has been a bonus daily drop of Good Black News, based on the format of “A Year of Good Black News Page-A-Day Calendar for 2022,” published by Workman Publishing. Intro and outro beats provided by freebeats.io and produced by White Hot.

All excerpts of music from Marvin Gaye are included under fair use.

If you like these Daily Drops, please consider following us on Apple, Google Podcasts, RSS.com,Amazon, Spotify or wherever you get your podcasts. Leave a rating or review, share links to your favorite episodes, or go old school and tell a friend.

Original article source: https://goodblacknews.org/2022/04/02/celebrating-the-jazz-of-marvin-gaye-yes-jazz-jazzappreciationmonth-listen/ | Article may or may not reflect the views of KLEK 102.5 FM or The Voice of Arkansas Minority Advocacy Council