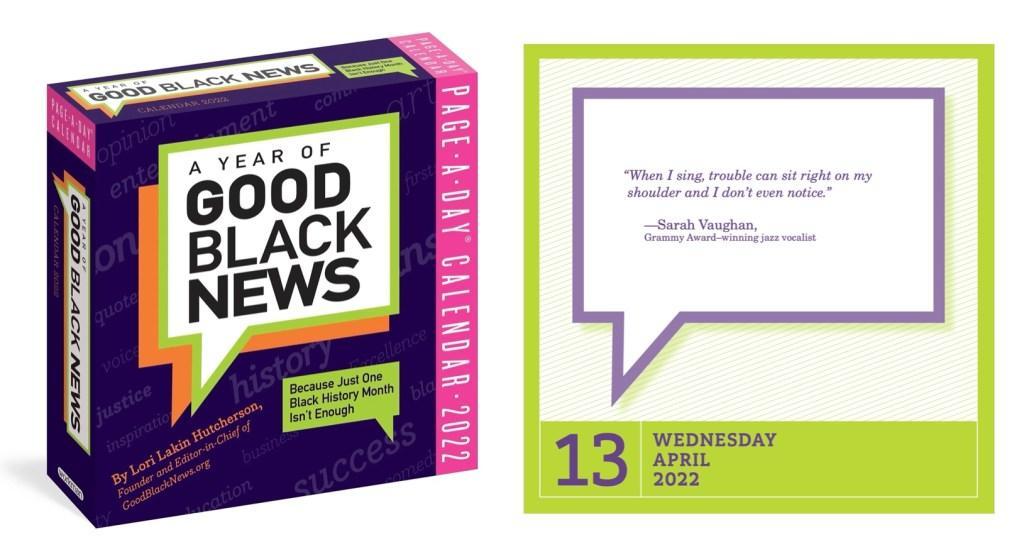 In continued celebration of #JazzAppreciationMonth, today we drop in on virtuoso vocalist Sarah Vaughan, who hailed from Newark, New Jersey, and was dubbed “Sassy” for her salty conversation and “The Divine One” for the heavenly and serene singing feats she accomplished with her three octave range.

To read about Vaughan, read on. To hear about her, press PLAY:

Hey, this is Lori Lakin Hutcherson, founder and editor in chief of goodblacknews.org, here to share with you a daily drop of Good Black News for Wednesday, April 13th, 2022, based on the “A Year of Good Black News Page-A-Day Calendar” published by Workman Publishing.

Today, we offer a quote from one of the finest vocalists and musicians ever to do it, she’s known as “Sassy,” “The Divine One,” she’s Ms. Sarah Vaughan:

“When I sing, trouble can sit right on my shoulder and I don’t even notice.”

Born in Newark, New Jersey in 1924, Sarah Lois Vaughan’s musical talent first revealed itself in church when she would clamor to sit with the organist instead of her mother.

As a teenager Vaughan snuck into local nightclubs to play piano, sing and perform. In 1942, she entered the famed Apollo Theater Amateur Night contest in New York and captivated the audience with her stunning performance of “Body and Soul.”

Here’s a version Vaughan later recorded of the song that was her calling card to her career:=

[Excerpt of “Body and Soul”]

Vaughan’s Apollo contest win lead quickly to a stint singing with the Earl Hines Orchestra before she joined fellow singer Billy Eckstine’s orchestra when he quit Hines to form his own big band.

Vaughan carried the bebop style into her vocals, as can be heard in her version of “Lover Man” with Gillespie’s Septet from 1946:

From the 1940s through the 1960s, Vaughan recorded with various labels, big and small, including Columbia, Roulette, Mercury, and Mercury’s jazz subsidiary, EmArcy.

Whether singing sweet pop or hot jazz, Vaughan’s vocals remained innovative, impressive and unparalleled. In 1947 she was the first singer to record and release “Tenderly,” establishing the standard for the standard:

Vaughan literally could sing anything – and did. She scored her first gold record with pop and R&B hit “Broken Hearted Melody”:

And kept her jazz chops tight with her renditions of songs like “Nice Work If You Can Get It”:

[Excerpt of “Nice Work If You Can Get It”]

And turned tunes like Erroll Garner’s “Misty,” which she recorded for her 1959 Vaughan and Violins album orchestrated and arranged by Quincy Jones, into something altogether ethereal:

In the 1960s and 1970s however, Vaughan experienced differing troubles with different record labels that didn’t know how to present or frankly even respect Vaughan in the changing musical times.

Just take one look at the clown with an afro photo on the cover of her 1974 Send in The Clowns album on Mainstream Records and you’ll get it.

But if you can’t do that right now, take a listen to the ‘70s vanilla pop/light disco production of the title track to get the point:

After Vaughan sued Mainstream over the album cover and other issues, she signed with Norman Granz’s Pablo label and released albums of jazz standards and bossa nova inflected music, two of which were nominated for Grammys.

She also re-arranged and re-recorded “Send in the Clowns,” which went from being lawsuit-worthy to another of her signature songs:

Vaughan continued to lean into bossa nova-style music in the 1980s, and recorded her last full album, 1987’s A Brazilian Romance, with Sergio Mendes producing. A personal favorite of mine from that LP is the languidly stunning “So Many Stars”:

[Excerpt of “So Many Stars”]

In her lifetime, Vaughan received a star on the Hollywood Walk of Fame, was inducted into the Jazz Hall of Fame and received the National Endowment for the Arts Jazz Masters Award in 1989. Vaughan passed in 1990 and in 1998, her recording of “If You Could See Me Now,”composed specifically for her by Tad Dameron four decades earlier, was inducted into the Grammy Hall of Fame.

[Excerpt of “If You Could See Me Now”]

In 2002, Sarah Vaughan’s “Whatever Lola Wants” was a standout on the Verve Remixed2 compilation, introducing her timeless voice to a whole new generation:

In 2012, Vaughan was inducted into the New Jersey Hall of Fame, and for over a decade, the New Jersey Performing Arts Center has held an annual International Jazz Vocal Competition, nicknamed “The SASSY Awards” in honor of the one and only, the incomparable Sarah Vaughan.

Links to these sources and more are provided in today’s show notes and the episode’s full transcript posted on goodblacknews.org.

And let’s hear Sarah Vaughan’s voice one more time – her speaking voice – from her 1964 live performance in Sweden of “Misty”:

“Thank you very very much ladies and gentlemen. I’m very nervous up here I got a cold today. The day I got to do TV I got a cold. That’s fine. But anyway I do you want to enjoy our show and right now I like to do a little tune that I recorded while I was over here and not in Stockholm but while I was in Paris in ’58. A tune that was written by Erroll Garner. I do hope you enjoy “Misty.”

All excerpts of Sarah Vaughan’s music included are permitted under Fair Use.

If you like these Daily Drops, please consider following us on Apple, Google Podcasts, RSS.com,Amazon, Spotify or wherever you get your podcasts. Leave a rating or review, share links to your favorite episodes, or go old school and tell a friend.

Original article source: https://goodblacknews.org/2022/04/13/celebrating-legendary-jazz-vocalist-sarah-vaughan-for-jazzappreciationmonth-listen/ | Article may or may not reflect the views of KLEK 102.5 FM or The Voice of Arkansas Minority Advocacy Council