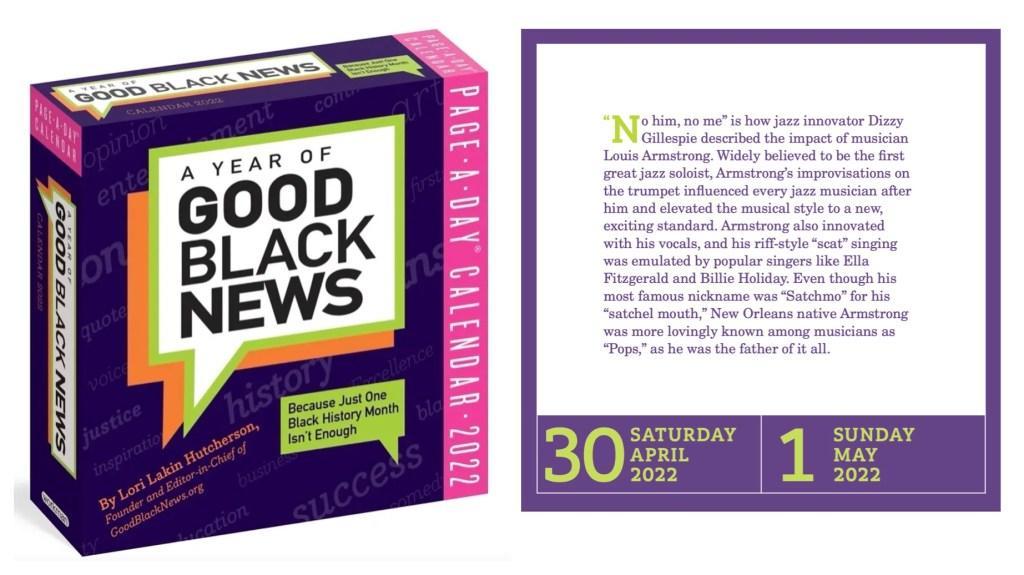 We end our celebration of #JazzAppreciationMonth today with a short tribute to a seminal architect of the sound, the legendary New Orleans son, Louis Armstrong.

To read about Armstrong, read on. To hear about him, press PLAY:

[You can subscribe to the Good Black News Daily Drop Podcast via Apple Podcasts, Spotify, Google Podcasts, rss.com or create your own RSS Feed. Or listen every day here on the main page. Full transcript below]:

Hey, this is Lori Lakin Hutcherson, founder and editor in chief of goodblacknews.org, here to share with you a daily drop of Good Black News for Saturday, April 30th, 2022, based on the “A Year of Good Black News Page-A-Day Calendar” published by Workman Publishing.

Today, we’d like to close out #JazzAppreciationMonth, with a short tribute to a primary architect of the sound, the legendary New Orleans son, Louis Armstrong:

“No him, no me,” is how jazz innovator Dizzy Gillespie described the impact of musician Louis Armstrong.

Widely believed to be the first great jazz soloist, Armstrong’s improvisations on the cornet and trumpet influenced every jazz musician after him and elevated the musical style to a new, exciting standard.

Born in August of 1901, during one of the more challenging times of his childhood, Armstrong was sent to a home for boys in 1912 after firing his stepfather’s gun in the air during a New Year’s Eve celebration.

While at the “Colored Waifs Home for Boys” as it was called, Armstrong learned how to play the cornet. When Armstrong was released, as he worked odd jobs he was mentored on his horn by one of the best players in town — Joe “King” Oliver – and eventually replaced Oliver on cornet in Kid Ory’s band.

Armstrong soon reunited with Oliver when Oliver formed his own band in Chicago, which lead to Armstrong’s first recorded solo on record, 1923’s “Chimes Blues.”

Armstrong soon left his mentor to join Fletcher Henderson’s Orchestra, the top  Black big band in New York. But the big city lifestyle and creative restraints Armstrong encountered lead him back to New Orleans to play with his wife Lil Armstrong’s band at the Dreamland Café.

Armstrong also began recording with his studio band – first the Hot Five and then Hot Sevens – even though they weren’t who he played with for live performances.

These recordings with smaller groups of musicians were an early influence on what would that become the norm after the swing band/orchestra’s hey day in the 1930s that ushered in the bebop era in the 1940s.

Armstrong also innovated with his vocals, and his riff-style “scat” singing was emulated by popular singers like Ella Fitzgerald and Billie Holiday.

Armstrong’s influence on other musicians was impactful and immediate. A young pianist from Pittsburgh, Earl Hines, assimilated Armstrong’s ideas into his piano playing, and together, they made some of the greatest recordings in jazz history in 1928, including their duet on “West End Blues”:

As Armstrong’s reputation grew, he toured in Europe, began recording hit songs of the day and appeared in Hollywood movies such as Pennies From Heaven and High Society with Bing Crosby, The Glenn Miller Story with Jimmy Stewart and New Orleans with Billie Holiday. Armstrong also recorded with a smaller six-piece combo, the All Stars.

The personnel of this combo would frequently change, but Armstrong would perform live with his All Stars until the end of his career. Members, at one time or another, included Jack Teagarden, Earl Hines, Sid Catlett, Barney Bigard, Trummy Young, Edmond Hall, Billy Kyle and Tyree Glenn, among other jazz legends.

During this time in the 1940s and 1950s, Armstrong had hits with his versions of songs such as “That Lucky Old Sun,” “A Kiss to Build a Dream On,” “Blueberry Hill” “La Vie En Rose” and one of the biggest hits of his career, his version of “Mack The Knife”:

[Excerpt from “Mack The Knife”]

As times advanced and changed, Armstrong’s style was seen as outmoded and outdated. He received criticism for remaining silent on politics and not lending his voice to the fight against racism and for civil rights.

Even when Armstrong did speak up, as in 1957 when he called out President Eisenhower for allowing Governor Orval Faubus to use the National Guard to prevent the Little Rock Nine from integrating Little Rock Central High School, he was met with criticism from whites and Blacks alike – the former for saying anything and the latter for seeming to speak out too late.

Yet and still, Armstrong kept on with doing what he wanted to do musically and defying all odds and at the height of the British invasion of the rock and roll era, he scored a #1 Billboard pop hit in 1964 at the age of 63 with his version of “Hello, Dolly”:

In 1965, Armstrong started performing the Fats Waller tune “Black and Blue” live again a decade after removing it from his repertoire. He changed a lyric from being “I’m white inside” to “I’m right inside” and turned it into a protest that he would continue to play for the rest of his life:

Three years later however, Armstrong’s version of “What A Wonderful World” did not get the same reception in the United States. But it was a number one hit overseas in England and South Africa in 1967, and after its appearance almost two decades later in the 1986 movie Good Morning, Vietnam, “What a Wonderful World” became a signature tune and perennial favorite of Armstrong’s, known the world over to this day.

[Excerpt of “What a Wonderful World”]

Armstrong’s home in Corona, Queens, which he shared with his fourth wife Lillian from 1943 until his passing in 1971, was declared a National Historic Landmark in in 1977. Today, the house is home to the Louis Armstrong House Museum, which annually receives thousands of visitors from all over the world.

Even though his most famous nickname was “Satchmo” for his “satchel mouth,” New Orleans native Armstrong was more lovingly known among musicians as “Pops,” as he was the father of it all.

[excerpt from “When The Saints Go Marching In”]

You can also watch the 1957 documentary Satchmo the Great which is currently posted on YouTube, Ken Burn’s Jazz miniseries on PBS, and be on the lookout for what Apple Original Films announced last year would be the definitive Louis Armstrong documentary produced by Imagine Entertainment where the story will be told entirely through Armstrong’s own words titled Black & Blues: The Colorful Ballad of Louis Armstrong.

And speaking of Louis Armstrong’s words, let’s hear a bit of him speaking about love and life from an audio clip posted on louisarmstronghouse.org:

This has been a daily drop of Good Black News, written, produced and hosted by me, Lori Lakin Hutcherson.

Excerpts from Louis Armstrong’s music are included under fair use.

If you like these Daily Drops, follow us on Apple, Google Podcasts, RSS.com, Amazon,Spotify or wherever you get your podcasts. Leave a rating or review, share links to your favorite episodes, or go old school and tell a friend.

Original article source: https://goodblacknews.org/2022/04/30/celebrating-jazz-architect-genius-and-legend-louis-armstrong-to-close-out-jazzappreciationmonth-listen/ | Article may or may not reflect the views of KLEK 102.5 FM or The Voice of Arkansas Minority Advocacy Council