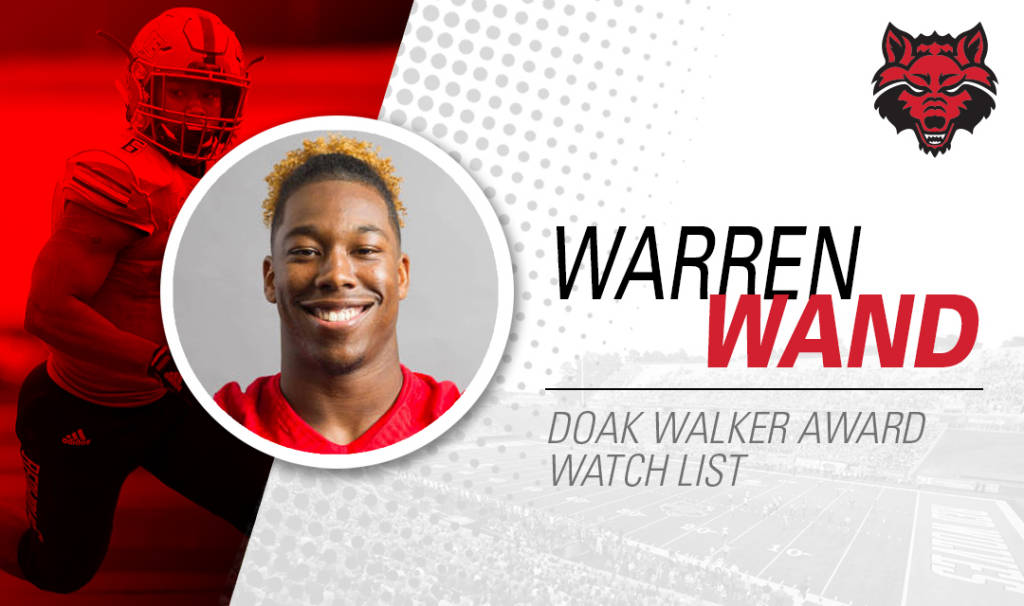 JONESBORO, Ark. (7/18/18) – The PwC SMU Athletic Forum has announced that Arkansas State senior running back Warren Wand is a preseason candidate for the 2018 Doak Walker Award, presented annually to the nation’s premiere running back.

Wand finished the 2017 campaign by rushing for 715 yards and six touchdowns to lead the Red Wolves’ rushing attack for the second straight season. He averaged 72.2 yards on the ground per game to rank fifth in the Sun Belt Conference, which included rushing for a career-best 173 yards against ULM. The performance against the Warhawks was also the fifth most yards by a running back in league during the 2017 season.

The Edmond, Okla., native enters his senior season with the 11th most rushing yards (2,303) in school history and is 697 yards shy of becoming the fifth player in school history to reach 3,000. Earlier this year Wand was named Lindy’s and Athlon’s Preseason Second Team All-Sun Belt Conference, while Street & Smith named him the “Most Elusive Running Back” in the Sun Belt Conference.

This is the third straight season that Wand has been named to the Doak Walker Award Watch List, tying Reggie Arnold (2007-09) for the most appearances on the list in school history.

The recipient of the 2018 Doak Walker Award will be announced live on The Home Depot College Football Awards on Thursday, December 6 on ESPN.

Original article source: http://www.astateredwolves.com//ViewArticle.dbml?DB_OEM_ID=7200&ATCLID=211735437 | Article may or may not reflect the views of KLEK 102.5 FM or The Voice of Arkansas Minority Advocacy Council