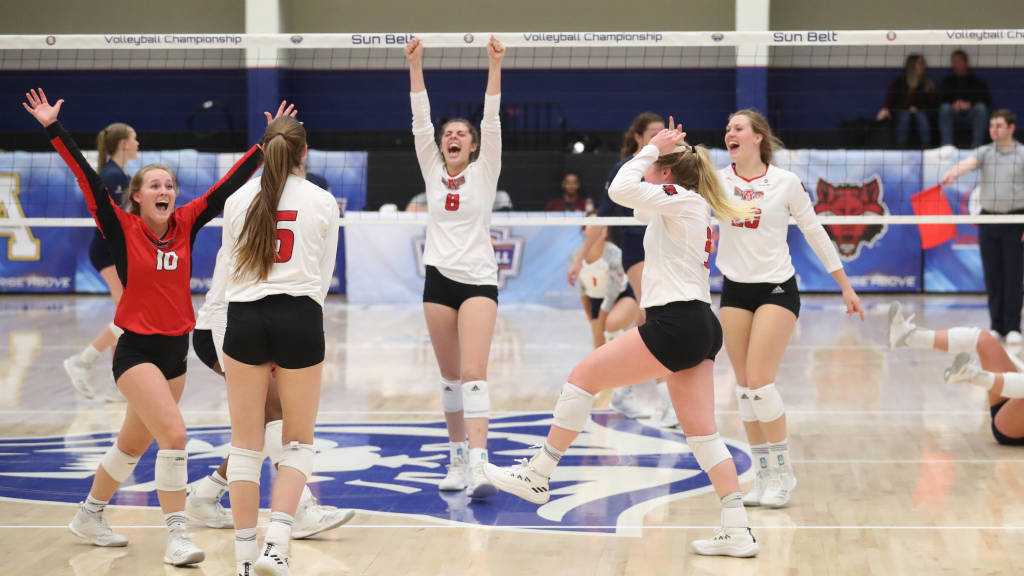 With the win, A-State will advance to the Quarterfinals to face No. 3 Coastal Carolina Friday, Nov.16, while South Alabama’s tournament run will come to a halt.

“I’m really proud of the way our kids played tonight,” Said A-State head coach David Rehr. “it was the defense that carried us in the final three sets and it’s something we’re going to need for the remainder of this tournament.

Three-time offensive player of the year Carlisa May led the Red Wolves with 19 kills while freshman Macey Putt added 18. Ellie Watkins handed out a game-high 54 assists while Tatum Ticknor paced the A-State defense with 54 digs.

In the first set, A-State took an early 9-6 advantage over the Jaguars when it went on a 3-0 scoring run led by Callie Weaver and Kenzie Fields. The Jaguars rallied when they went on a 5-0 scoring run to take a 17-16 lead. South Alabama pushed its advantage 23-19 on kills by Kelly Hartman and Anna Harris. The Red Wolves couldn’t find rhythm offensively when they fell 25-20 on back-to-back attack errors.

The Jaguars jumped out to an 5-1 advantage on back-to-back kills by Harris. However, the Red Wolves rallied when Ticknor and Watkins earned momentum changing digs to set Macey Putt up for two back-to-back kills, to even the match at 10, to force a South Alabama timeout.

The Red Wolves are set to battle it out with No. 3 Coastal Carolina Friday, Nov. 16 in the quarterfinals of the Sun Belt Conference Tournament. The first serve is set for 4 p.m. from the GSU Sports Complex.

Original article source: http://www.astateredwolves.com//ViewArticle.dbml?DB_OEM_ID=7200&ATCLID=211780870 | Article may or may not reflect the views of KLEK 102.5 FM or The Voice of Arkansas Minority Advocacy Council