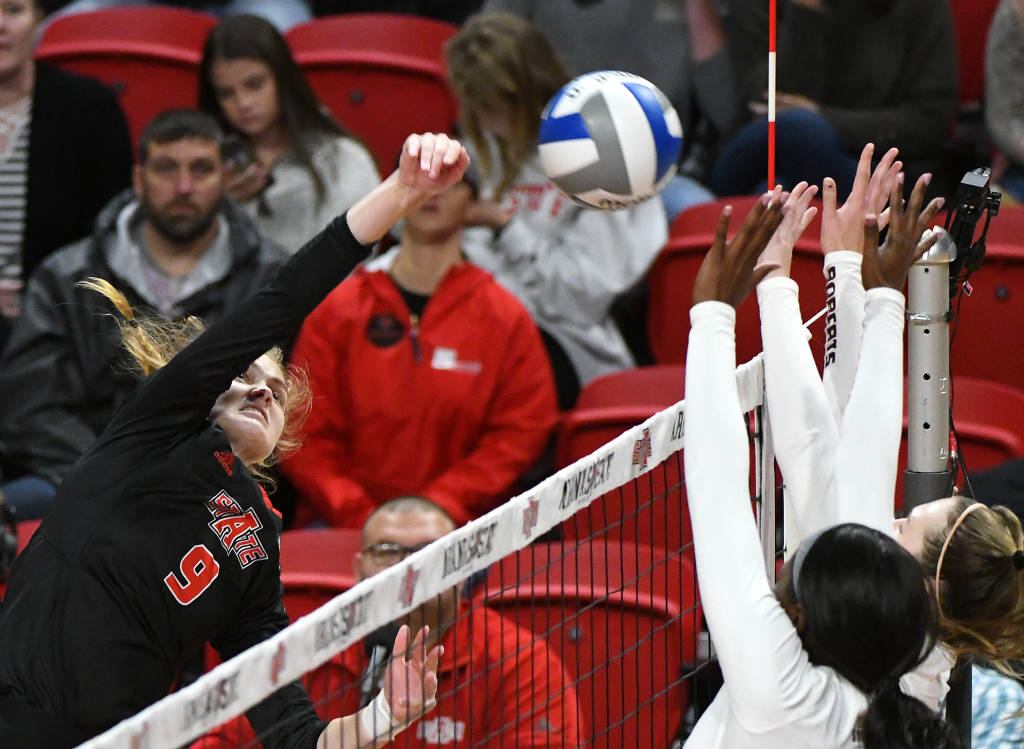 This season is the 44th year of volleyball at A-State and the home team has an all-time mark of 1,042-530-5 (.658) and had the 19th most wins in Division I and was tied for the 25th best winning percentage in Division I history entering the 2018 campaign.
Arkansas State concludes the regular season 17-12 overall and 9-7 in Sun Belt Conference. The Red Wolves are 8-2 at home, 5-7 on the road and 4-3 on neutral ground for the 2018 campaign.
Senior Carlisa May took over the No. 1 spot on A-State’s all-time career kills list, surpassing Margie Kolat (1991-94) who had 1,789 kills.
May currently ranks sixth in the nation with 384 kills on the year, while also checking in at 11th in the nation with 4.74 kills per set.
Among active players in all of Division I volleyball, May ranks second with her career kills total, and ranks fifth among active players across all divisions.
Ellie Watkins ranks 40th in the nation, and third in the Sun Belt, with 1,013 total assists on the season. She is also 72nd in the nation with 9.74 assists per set.
Senior setter Ellie Watkins has quickly become one of the school’s most dominant setters and has recently broke into A-State’s top-10 leaders in assists. Watkins is now chasing No. 9 Shelly Kirby, who handed out 2,343. Watkins is currently averaging 9.74 assists per set. In nine games of the 2018 campaign Ellie Watkins has handed out 40+ assists.

May collected 497 kills on the season for a 4.73 kills per set average, tops in the league in both categories. In conference play she totaled 291 kills and a 4.85 per set average as she was the only player in the Sun Belt to average more than four kills per set in both league and overall contests.
Watkins earned Second-Team All-Sun Belt Conference honors after finishing fourth in the league with 1,013 assists and a 9.74 assists per set average. In addition, the A-State setter finished third on the team with 189 digs, 94 kills and a .315 hitting percentage. In league play, the Weldon Springs, Mo., Native handed out 571 assists and a 9.52 assists per set average. In addition, Watkins currently sits in 10th place in Red Wolves’ history with 2,009 career kills.

A-State is 31-22 all-time in the Sun Belt Conference Tournament with the 31 wins representing the most among current members of the league.
The Red Wolves have made it to two straight championship matches in the competition but were the top seed in the tournament the last two seasons. A-State won the tournament in 2015 3-2 over Appalachian State to go to the NCAA Tournament, but lost 3-1 to Coastal Carolina last season.
Prior to head coach David Rehr arriving, the Red Wolves were on an 11-year drought (2001-2011) without winning a match in the league tournament due to going 0-1 or not qualifying for the event. However, the team won its first-round match in Coach Rehr’s first season in 2012 to end the drought and have won at least one match in all six of his seasons up to this point.
This is the first SBC Tournament for the Red Wolves to host since 1996, which was the last of a six-year stretch that saw A-State host the event. Arkansas State registered a 17-4 record during that time span and won four of the tournaments in 1991, 1992, 1994, and 1995 with NCAA Tournament appearances coming in the final three of those.

Arkansas State has a 31-5 advantage over South Alabama all-time and has won seven-straight over the Jaguars.
The first meeting happened in 1982 with Arkansas State dropping a 2-0 decision to South Alabama at the Mississippi University for Women Invitational in Columbus, Miss. The two teams met again in 1988 with A-State picking up a victory that started a 14-match win streak over the Jaguars that USA snapped with a 3-1 victory in Jonesboro in 2001.
Since the loss in 2001, the Red Wolves are 17-3 against the Jaguars with head coach David Rehr holding an 9-1 advantage over South Alabama all-time. His 2012 team swept the Jags in the only meeting before the two teams split two matches in 2013 with each squad winning on its home floor. Since the loss in 2013, A-State has won seven-straight over the Jaguars with all of them being sweeps until this season when A-State won 3-1 Oct. 22.
A-State’s 3-1 win over the Jags in Mobile earlier in 2017 was USA’s first SBC loss of the year after South Alabama started league play 9-0. A-State only out hit USA .250 to .244, but out blocked the home team 10-7 despite the Jaguars leading the league in blocks. Carlisa May had 19 kills to lead the Red Wolves while Timber Terrell and Jessica Uke were also in double-digits. Kenzie Fields had three aces and both Terrell and Uke had five blocks each. Kristina Alabastro had 12 kills to lead South Alabama, while Hannah Harris had 10 in 11 attempts for a .909 hitting percentage, the highest by a single player this season against Arkansas State.
The Red Wolves met once this season met once this on Sep 23, 2018 The Red Wolves fell behind 0-2 but rallied to the match 3-2.
Carlisa May finished the match with 29 kills and while Macey Putt and Payton Uhlenhake added 12 and Ellie Watkins handed out 54 assists. South Alabama was led by Harris who had 19 kills and 11 digs while Morgan Stallcup had 12 kills on a .647 hitting percentage, while Kelley Hartman added another 12 for the jaguars.
South Alabama finishes the regular season 13-16 overall and 7-9 in sun Belt Action. The Jaguars are 2-4 on neutral ground.

Coastal Carolina won both matchups in 2017, including a 3-1 victory over A-State in the semifinals of the Sun Belt Conference Tournament. The Chanticleers went on the win the tournament and earn the automatic berth in the NCAA Tournament. It was the second straight season that Coastal Carolina had knocked A-State out of the tournament.
The Red Wolves and Chanticleers split both meetings in 2016 with A-State earning a 3-2 win over Coastal Carolina in Conway, S.C., Sept. 25 before CCU claimed a 3-1 decision in the SBC Tournament finals Nov. 20. Both meetings were the first in school history.
In the five-set win over the Chanticleers, Carlisa May led the team with 16 kills, while Kenzie Fields had a double-double with 14 kills and 13 digs. Mallory Warrington handed out 54 assists and Markie Schaedig registered 36 digs. Leah Hardeman led Coastal with 21 kills and 20 digs.
May and Fields led the team in kills once again in the 3-1 loss in the Sun Belt Tournament finals with 13 and 11, respectively, with Fields posting another double-double with 11 digs. A-State hit .162 to Coastal Carolina’s .196 while Tahlea Bishop led the Chanticleers with 15 kills and Hardeman posted another double-double with 14 kills and 18 digs.
The most recent meeting took place on Oct. 5 when the Red Wolves fell 1-4 to the Chanticleers. Carlisa May lead the way for the Red Wolves offensively posting he sixth double-double of the season, she recorded 20 kills and 10 digs. Madison Turner earned 13 kills as A-State posted a team high 55 kills in the match.
Ellie Watkins handed out 47 assists, while Tatum Ticknor paced the Red Wolves’ defense with 30 digs.
Coastal Carolina concludes the regular season 12-12 overall and 11-5 in conference.

Original article source: http://www.astateredwolves.com//ViewArticle.dbml?DB_OEM_ID=7200&ATCLID=211780495 | Article may or may not reflect the views of KLEK 102.5 FM or The Voice of Arkansas Minority Advocacy Council