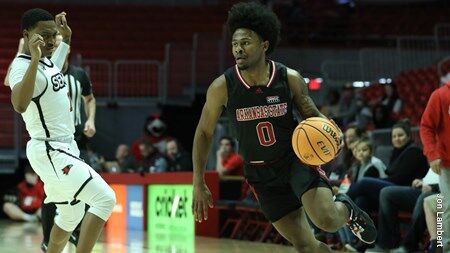 The Red Wolves faced a 31-25 deficit at the break shooting 27.3 percent (9-33) from the field in the first 20 minutes. A-State snagged six steals in the first half and UC Davis totaled 10 turnovers, but the Red Wolves had just four points off those 10 Aggie miscues.

Izaiyah Nelson led A-State with eight rebounds while Omar El-Sheikh and Fields each corralled seven boards. UC Davis won the battle on the glass 40-33 and held a slight advantage in second chance points, 14-12. The Red Wolves held an 18-12 advantage in turnovers and outscored the Aggies 20-8 in points off turnovers. A-State went to the charity stripe a season high 20 times and converted 65.0 percent (13-of-20) while the Aggies knocked down 11-of-18 (.611).

A-State returns to First National Bank Arena Tuesday against UT Martin with tip-off at 5:00 p.m. on ESPN+ and heard across the EAB Red Wolves Sports Network and flagship station 107.9 KFIN in the Northeast Arkansas area. For the latest on A-State men’s basketball, follow the team on Twitter (@AStateMB), Facebook (/AStateMB) and Instagram (@astatemb).

Read more here:
UC Davis Shoots Past A-State Men’s Basketball. Article may or may not reflect the views of KLEK 102.5 FM or The Voice of Arkansas Minority Advocacy Council