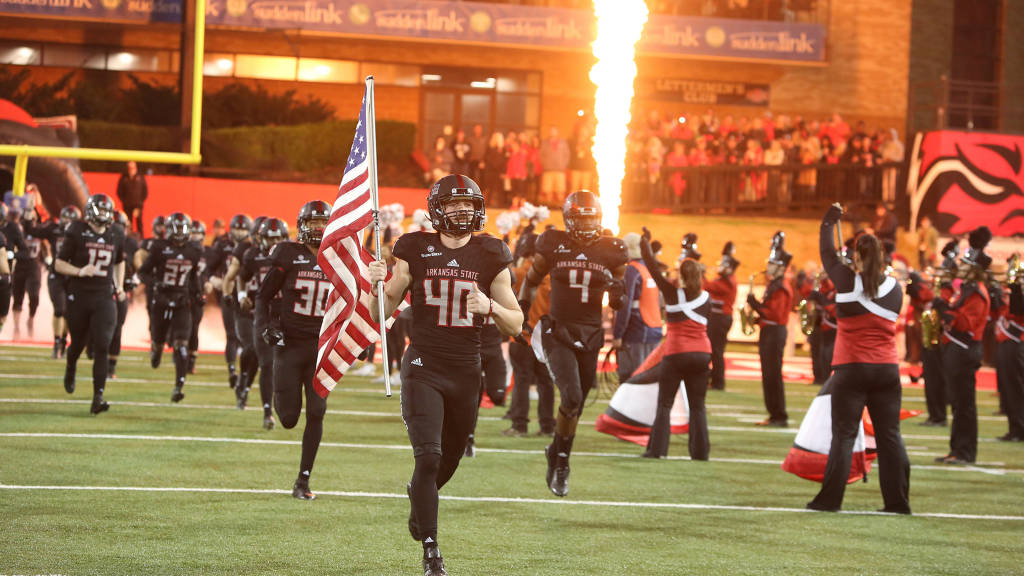 JONESBORO, Ark. (8/1/18) – The Arkansas State Athletics Department announced Wednesday that award-winning sports journalist and broadcaster Roger Twibell and Pete Cordelli, who won a national championship at Notre Dame as an assistant football coach and possesses a wealth of experience in sports media, have joined the Red Wolves’ ESPN3/ESPN+ broadcast team for their 2018 home football games as play-by-play commentator and color analyst, respectively.

“We’re extremely excited about the talent, knowledge and experience Roger and Pete are going to bring to our ESPN3 and ESPN+ home football broadcasts,” said Arkansas State Director of Athletics Terry Mohajir. “We have an outstanding production team in place, and I believe the addition of Roger as play-by-play and Pete as analyst puts us in a strong position to have an elite broadcast that will provide viewers the opportunity to have a great experience watching Red Wolves’ football. There is no doubt in my mind that our broadcast talent, based on experience and knowledge, will be as good as any in the country.”

A nationally renowned figure in sports broadcasting, Twibell has over 46 years of experience in the industry and has brought coverage of everything from college football and basketball games to the NFL, NBA, PGA and LPGA and much more to countless households across the world.

Twibell was featured as an ESPN SportsCenter anchor from 1981-86 during the infancy of the network before going on to broadcast games and events for other media giants such the CBS and ABC. His television career began in Tucson, Ariz., at KGUN-TV in 1973 before he made stops at some of the nation’s largest media markets in Dallas, Miami and Boston working in similar capacities.

His time in Boston at WBZ-TV saw him voted the best play-by-play announcer in New England by the Associated Press, earn a New England Emmy for his play-by-play performances and receive Syracuse University’s Phillips Award as the best nightly sportscaster, all leading up to his move to ESPN and subsequent work with CBS, ABC, the Big Ten Network and more.

Outside of his work as a broadcaster, Twibell also founded the highly-successful business LogoPutter in 2012. The Shawnee Mission, Kan., native earned his bachelor’s degree in radio-tv journalism from the University of Kansas in 1972.

Cordelli not only reached the pinnacle of the college football world in 1988 when he won a national title with Notre Dame, he has coached players such as Pro Football Hall of Fame running back Jerome Bettis and Heisman Trophy-winning wide receiver Tim Brown.

The pair was among numerous NFL players Cordelli helped develop over the course of his 21-year coaching career at the collegiate level. The Langhorne, Pa., native also served as head coach at Kent State for three seasons and made stops as an assistant at TCU, Memphis, Arkansas, Minnesota, Western Michigan and Rhodes College in addition to Notre Dame.

Prior to moving into sports radio and television, Cordelli also served a combined four years as NFL scout at two different franchises, including the Dallas Cowboys and Cleveland Browns. He made the move to sports broadcasting in 1996, hosting a popular daily sports call-in show called the “The Sports Scene” on WHBQ Sports 560 in Memphis while also joining the Ole Miss radio broadcast team as an analyst – a role he held two different times for a combined 15 years.

His broadcasting experience also includes time at Memphis’ ABC 24 and UPN 30 TV as a college and pro football analyst, as well as a radio host on the D1 Sports Network and a college football analyst for the SEC Digital Network.

Cordelli earned his bachelor’s degree in education in 1977 from North Carolina State University, where he also played quarterback for the Wolfpack.

Two of A-State’s six regular-season home football games this season have been selected to air on ESPN2 and ESPNU, while the remaining four will appear on ESPN+ or ESPN3 unless picked up later in the season for a national broadcast. The two contests already selected for national TV are both midweek games against Appalachian State and Georgia State. The Red Wolves’ remaining four home games are all scheduled for Saturday’s versus Southeast Missouri State, UNLV, South Alabama and ULM.

Original article source: http://www.astateredwolves.com//ViewArticle.dbml?DB_OEM_ID=7200&ATCLID=211766731 | Article may or may not reflect the views of KLEK 102.5 FM or The Voice of Arkansas Minority Advocacy Council