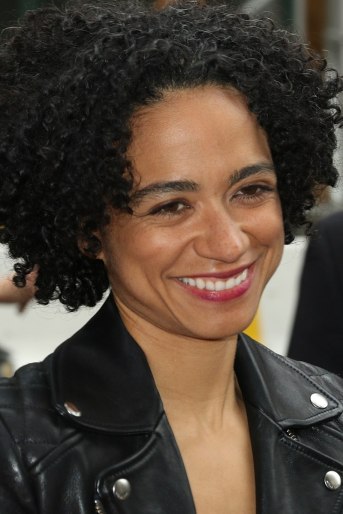 Ridloff appeared in the 2018 Broadway revival of Children of a Lesser God and was nominated for a Tony for her performance as Sarah Norman. Ridloff appears in the Palme D’Or nominated film Wonderstruck, and can be seen in John Legend‘s music video, “Love Me Now.” Ridloff was also the first Miss Deaf America of African-American and Mexican descent.

During San Diego Comic-Con on July 20 director Zhao and several of the stars spoke about The Eternals, which is shooting in London and is scheduled to be released on November 6, 2020.

To quote from ew.com:

“It’s about this group of incredible immortals but through their journey we really get to explore what it means to be human and humanity on our time on this planet,” Zhao said.

“The Eternals are a race of immortal aliens sent to Earth by the Celestials to protect humankind from the Deviants,” added Madden. Ridloff also signed that she is playing the first deaf character in the MCU.

Hayek, speaking about being the leader of the group, told the crowd, “I take my inspiration from our leader, Chloe, who’s also a strong woman and it takes a strong woman to do a movie like this because it’s so big and amazing and I’m so excited to be a part of it. The way she approaches leadership as a woman, as a strong woman, is that she sees them as a family. So there’s a lot of mother instincts in this Eternal, who is not supposed to have kids. So this is very exciting, and I feel very honored to be a part of a movie that is going to allow people who never felt represented in superheroes, or in this case Eternals, represented because I am proud to have a diverse family.”

Said Jolie, “I’m so excited to be here. I’m going to work 10 times harder because I think what it means to be a part of the MCU, what it means to be an Eternal, to be a part of this family, I know what we all need to do. We have all read the script. We have all know what the task ahead is and we are all going to be working very very hard. I’m training. I am thrilled. Thank you so much.”

Original article source: https://goodblacknews.org/2019/07/21/tony-nominee-lauren-ridloff-to-play-marvels-1st-deaf-superhero-in-the-eternals/ | Article may or may not reflect the views of KLEK 102.5 FM or The Voice of Arkansas Minority Advocacy Council