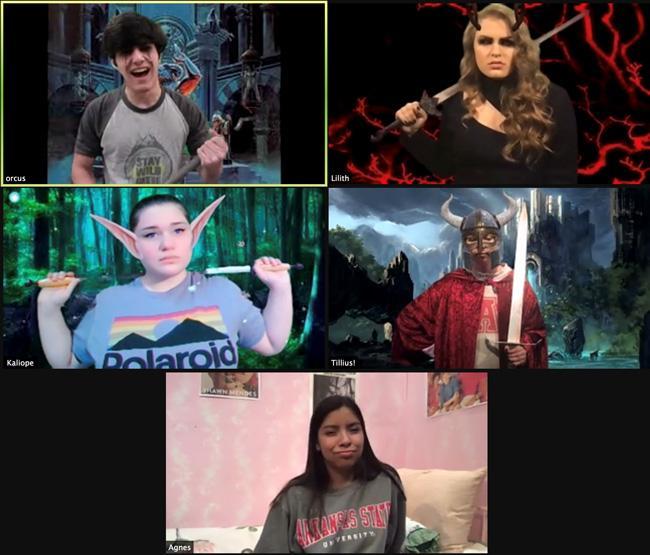 This virtual show will be performed live at 7:30 p.m. Friday and Saturday, Nov. 13-14, and 2 p.m. Sunday, Nov. 15. Patrons will view the performance through a Zoom webinar but will not need a camera or microphone.

Qui Nguyen’s dramatic comedy “She Kills Monsters: Virtual Realms” follows an average high school cheerleader, Agnes, as she copes with the tragic death of her younger sister Tilly. After discovering Tilly’s Dungeons and Dragons notebook, Agnes trades in her pom-poms for swords and shields. As she embarks on an epic healing adventure in Tilly’s world, Agnes finds a connection with her sister that she never had before.

The stage manager is Reilly Heffer of Little Rock, and assistant stage managers include Carson Horton of Batesville and Alex Jones of Russellville. All of the stage management team are theatre majors.

The QLab operator is Peyton Miller of Paragould, and the house manager is Kaitlyn Vacco of Mountain Home. Alec Lazarini of Memphis will be the documentarian, and Cody Preston of Bono will be the publicist. The wardrobe coordinator will be Lukas Larrison of Little Rock. All members of the production team are theatre majors, except Preston, a strategic communication major.

“She Kills Monsters: Virtual Realms” contains adult themes and language that may be upsetting to younger viewers.

Tickets for “She Kills Monsters: Virtual Realms” can be purchased at AState.edu/marketplace under the “Virtual theatre tickets” store or by clicking the link She Kills Monsters tickets. Tickets range from $7-10 with a family purchase option for $15.

Original article source: http://www.astate.edu/news/theatre-to-present-second-production-of-season-nov-13-15 | Article may or may not reflect the views of KLEK 102.5 FM or The Voice of Arkansas Minority Advocacy Council