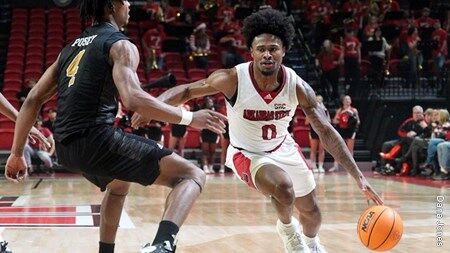 JONESBORO, Ark. (12/19/22) – A strong second half on both ends of the floor Monday night propelled the Arkansas State men’s basketball team to a 72-65 victory over Alabama State inside First National Bank Arena.

Caleb Fields scored a game-high 22 points to lead three double-figure scorers. The junior guard shot 6-for-16 from the floor, but converted 10 of 12 free-throw attempts. Avery Felts added 15 points on 4-of-8 from deep, including a dozen points in the second half. Omar El-Sheikh registered 11 points with eight rebounds, while Izaiyah Nelson grabbed a game-high 10 boards.

The visitors started strong in the first half leading by as much as eight before Markise Davis tied it at 27 with a trey with 2:50 left in the half. Alabama State closed with back-to-back scores in the final minute to lead 31-27 at intermission.

That lead survived less than four minutes into the second half, when Felts and Fields spearheaded a 10-0 A-State run. A pair of Felts treys ended the stretch and put the Scarlet and Black ahead for good, leading 42-36 with 14:23 to go. After Alabama State cut it to four, another 10-0 run led by rookies Nelson and Terrance Ford Jr. gave the Red Wolves their largest lead of the night, up 52-38 at the 11:48 mark.

Eight of the Hornets’ next 10 points came at the foul line, as they trimmed the deficit to eight. After Fields converted 1-of-2 at the charity stripe, McCoy hit a pair of threes to make it a two-score affair, pulling Alabama State within five with a minute left. A-State then took advantage of free-throw opportunities down the stretch, creating distance and putting the contest out of reach.

A-State concludes non-conference play Thursday, hosting former Sun Belt foe and in-state rival Little Rock. Tip-off in the matinee against the Trojans is set for 2 p.m. on ESPN+. The contest can also be heard on the EAB Red Wolves Sports Network, including flagship station 107.9 KFIN in the Northeast Arkansas area.

Read more from the original source:
Strong Second Half Propels Red Wolves Past Hornets. Article may or may not reflect the views of KLEK 102.5 FM or The Voice of Arkansas Minority Advocacy Council