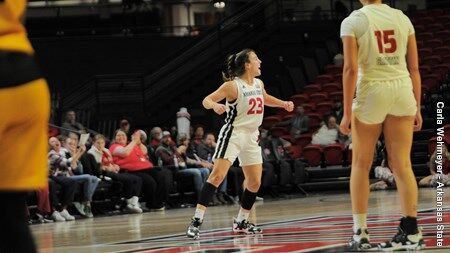 The Red Wolves (5-5) held the Lady Tigers (1-9) to just one point over the game’s final two minutes, 45 seconds en route to winning its third straight home contest and halting a two-game skid. A-State out-rebounded Grambling 37-36, but grabbed 16 offensive rebounds that resulted in a season-high 28 second-chance points.

Higginbottom scored in double figures for the 10th game in a row, the longest season-opening streak by an A-State player since Jane Morrill did so in 15 straight to begin the 2012-13 campaign. Her 19 points came on 8-of-18 shooting, including 3-of-6 from 3-point range. The Batesville, Ark., native handed out five assists to just one turnover while also grabbing two steals and three boards.

Three other Red Wolves scored in double figures, with Lauryn Pendleton adding 13 off the bench and Mailyn Wilkerson scoring 12 on four 3-point makes. Melodie Kapinga dropped 10 points, but also provided nine rebounds – eight on the offensive end. All nine players who saw the court both scored and had at least one rebound in the contest.

Grambling shot 47.5 percent (28-59) from the field and had a pair of double-digit scorers. Phylicia Allen scored 15 points off the bench to lead the visitors, with Leah Morrow notching a double-double with 10 points and 10 rebounds.

The Red Wolves started fast, scoring 12 of the game’s first 17 points en route to forcing an early timeout. A long 2-point bucket by Leilani Augmon widened the gap to 18-9 with under two minutes remaining in the first, but Grambling pulled within six on a buzzer-beating trey by Jazmyn Jackson to cut A-State’s lead down to 21-15 after 10 minutes.

Back-to-back Higginbottom scores pushed the Red Wolves’ lead out to 10 early in the second quarter before the Lady Tigers went on a 9-0 run – their largest of the game – to make it a one-point affair (29-28) with 4:25 to go in the half. Jade Upshaw answered with a trey, then Keya Patton added two of her six points to end the half, with A-State holding GSU scoreless for nearly four and a half minutes to lead 34-28 at the break. Patton also grabbed eight rebounds as one of three Red Wolves with eight or more boards.

Grambling kept it close throughout the third quarter, as Arkansas State edged the Lady Tigers 21-20 in the period. Pendleton accounted for seven straight points to move her team’s lead back up to six, but a trey by Colbi Maples once again cut it to one. Higginbottom helped the Red Wolves close the quarter strong, scoring on a midrange jumper, then ending the period on a trey to make it 55-48 after three.

A-State turned up the heat on the offensive end in the fourth, matching the Lady Tigers nearly shot-for-shot. Anna Griffin, who scored eight points and hauled in eight rebounds, laid in a score before a Patton jumper made it an 11-point game with eight minutes to go. The Red Wolves’ largest lead of the night came at the 4:34 mark, when Wilkerson drained a trey to make it 71-56. Grambling clawed back to within eight, but A-State closed on a 6-1 run to claim the win in its final home non-conference game.

A familiar foe awaits A-State in its final non-conference game, as the Red Wolves travel to the capital city to square off against in-state rival and former Sun Belt Conference foe Little Rock on Sunday. Tip-off against the Trojans inside the Jack Stephens Center is set for 1 p.m. on ESPN+. The radio broadcast can be heard live via the EAB Red Wolves Sports Network station 95.3 and 96.9 The Ticket Radio Network.