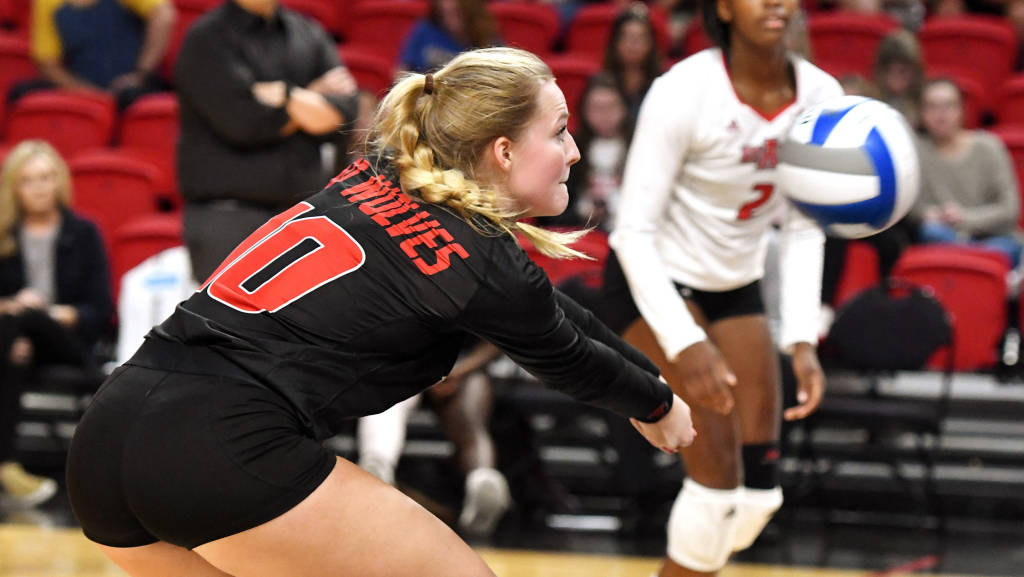 A-State (7-5) pushed its season-best win streak to five matches as the Red Wolves and Salukis (4-8) went the distance. Arkansas State raced out to a 7-0 lead after a kill by Isabel Theut and never looked back. SIU worked back to within 12-4, but A-State scored three straight points on a Carlisa May kill, Madison Turner block, and Macey Putt kill to claim the set 15-4. The Red Wolves out hit Southern Illinois .474-.062 in the frame.

“This was another tough match for us and we had to battle to win it,” A-State head volleyball coach David Rehr said. “I’m proud of the fight and bounce-back ability we showed in the sets we won, but the way we played in the two sets we lost was disappointing. Obviously, Carlisa (May) and Macey (Putt) delivered a lot of offense tonight, but the defensive effort from both of them with their dig numbers along with Tatum Ticknor’s and the blocks was huge. Ellie Watkins has also been playing very solid in this stretch of wins we have and I hope we can keep this going tomorrow.”

May led the offensive effort with 24 kills and added 10 digs for her fifth double-double, while Putt added 20 kills and 11 digs for her third double-double. Ticknor picked up 32 digs, a new season high and one shy of her career high, while Theut led the team with five blocks in four sets of action. Watkins handed out 49 assists and added five kills, seven digs, and two blocks to her stat line as she helped A-State to a .227 attacking percentage compared to .146 for Southern Illinois.

A-State responded by jumping out to a 16-10 advantage in set three on a block by Watkins and Theut, but allowed SIU to get within 23-22 to force a timeout by the Red Wolves. However, a kill by Watkins and attack error by the Salukis gave Arkansas State a 25-22 set win. The home team fell behind 4-0, but rallied to tie set four at 19-19 and again at 22-22. Southern Illinois bounced back with three straight points on two A-State errors and a kill to win the set 25-22 and send the match to a decisive fifth set.

Maggie Nedoma led the Salukis with 19 kills, while Alayna Martin had 36 assists and 17 digs.

Original article source: http://www.astateredwolves.com//ViewArticle.dbml?DB_OEM_ID=7200&ATCLID=211772056 | Article may or may not reflect the views of KLEK 102.5 FM or The Voice of Arkansas Minority Advocacy Council