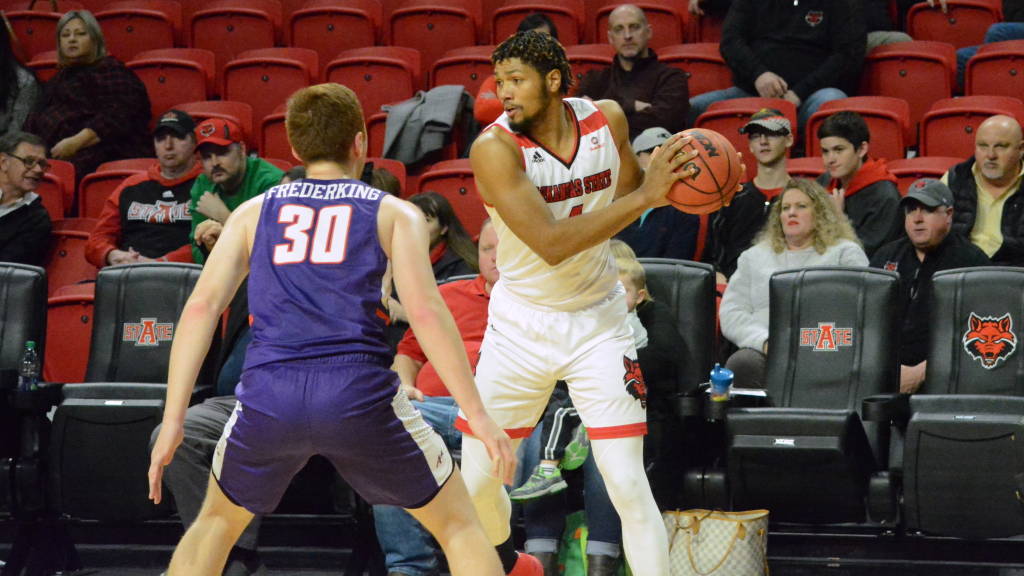 The Red Wolves improved to 2-0 at home and brought their overall record to 3-5 on the year.  Evansville entered the game winners in four of their last five contests, but saw their record move to 4-4 with the setback.

Cockfield scored at least 20 points for the fourth consecutive outing and was joined in double figures by senior forward Tristin Walley, who finished with a season-high 14 points.  The Red Wolves also got 24 points from its bench, and eight of their nine players who saw action contributed at least six points.

The majority of the first half was a back-and-forth battle as neither team led by more than six points over the initial 16 minutes, which featured eight lead changes and five ties.  However, A-State would close the first half strong to take a 43-33 advantage into the break.

The Purple Aces took their last lead of the game on a pair of Marty Hill free throws that made the score 29-28 with 4:30 left in the opening half, but the Red Wolves closed the half with a 15-4 run to open up a double-digit halftime advantage.

Arkansas State held at least a two-possession lead throughout the entire second half and saw its advantage reach as much as 15 points, 67-52, with 9:34 remaining in the game.  The Purple Aces didn’t get closer than nine points the rest of the way.

Evansville entered the contest shooting 37.5 percent from beyond the arc and 44.6 from the field, but A-State held them under 40 percent overall and to a 26.1 mark from three-point range.  At the same time, the Red Wolves connected on 45.2 percent of their shots, made 9-of-24 three’s and hit 22-of-26 free throws for a season-high 84.6 percent.

“This was a great team win for our guys,” said A-State head coach Mike Balado.  “They played the defense that I want to see on a consistent basis, and even though they scored 77 points, percentage wise I’ll grade this game out pretty well.  Everybody contributed and we were happy to finally be home (after playing six of the first seven games on the road) and play in front of our crowd, which was great. We’re happy for a good team win tonight.”

Junior forward Malik Brevard pulled down a game-high eight rebounds for the Red Wolves as they also pulled down 41 boards to the Purple Aces’ 30.  Sophomore guard Christian Willis dished out a career-high four assists and freshman guard Kobe Wilson scored a season-high nine points for A-State as well.

Evansville was led by three players scoring in double figures, including Shea Feehan with a team-high 21 points.  Hill and K.J. Riley added 16 and 15 points, respectively, for the Purple Aces.

Original article source: http://www.astateredwolves.com//ViewArticle.dbml?DB_OEM_ID=7200&ATCLID=211782795 | Article may or may not reflect the views of KLEK 102.5 FM or The Voice of Arkansas Minority Advocacy Council