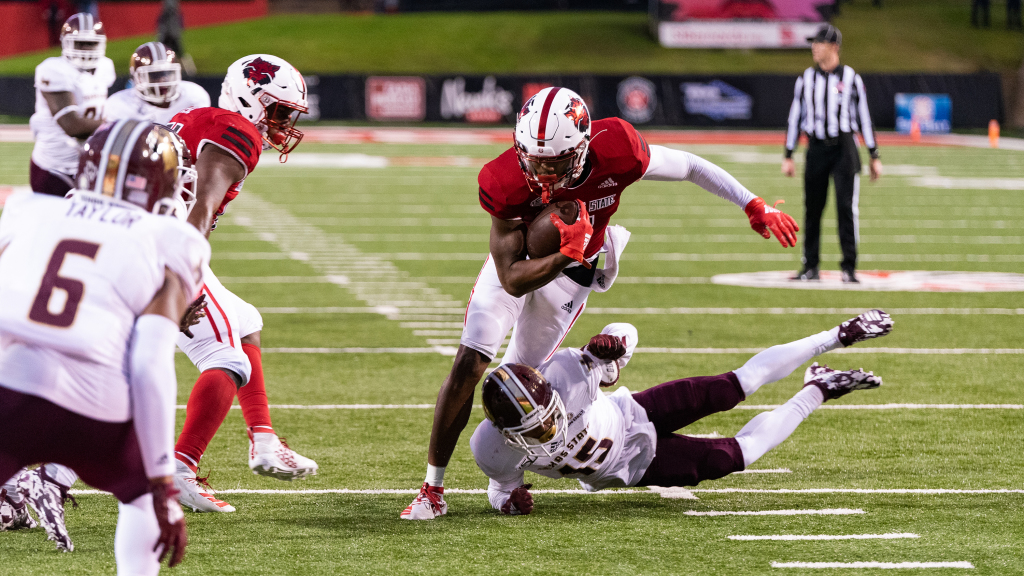 The Red Wolves (4-4, 2-2 SBC) claimed its fifth straight against the Bobcats (2-5, 1-2) with the win and improved to 6-1 in the series. A-State’s win was highlighted by its stout defensive performance that limited Texas State to 2-of-12 on third down. A-State allowed 227 yards of total offense, just 81 on the ground while coming up with three takeaways – two on interceptions by Nathan Page.

“I thought we came out with a great deal of energy to get the stop and then go 99 yards in 18,” head coach Blake Anderson said. “We were frustrated with the second quarter and I thought our energy level was down both on the field and on the sideline. We challenged them at halftime and came out in the third quarter and responded well. We played very well in all three phases and you could see guys out there enjoying playing tonight.”

Omar Bayless once again etched his name in the record book, hauling in a pair of touchdown passes from Layne Hatcher to give him 12 on the season and set the program record for single-season touchdown catches. Bayless led A-State with 77 yards on seven catches, with Hatcher connecting on 18 of 28 passes for 158 yards.

The Bobcats looked to score on the game’s opening drive, traveling 74 yards all the way down to the A-State 1, but the Red Wolves’ defense held tough, forcing a turnover on downs when a pass from Vitt fell out of reach of Hutch White.

A-State then struck first on a methodical 18-play, 99-yard drive that took 7 minutes, 22 seconds off the clock, capped off by a 13-yard toss from Hatcher to Bayless that marked Bayless’ 11th touchdown of the season – breaking A-State’s single-season record for receiving touchdowns in a season.

The drive marked a season best for A-State, both in total plays and time of possession.

The Red Wolves added three more to open the second when Blake Grupe’s 20-yard field goal split the uprights, capping off a short drive that was set up by a fumble recovery deep in Texas State territory.

Jamal Jones stretched A-State’s lead out to 17-0 when he found the end zone from seven yards out, ending an eight-play, 64-yard drive with 9:22 left in the half. Jones rushed for a career-high 63 yards on 13 carries.

Midway through the second, Texas State put its first points on the board when Caleb Twyford crossed the goal line with a two-yard rushing score to make it 17-7 with 7:06 remaining in the half.

The Bobcats cut the deficit to one score with a six-yard strike from Vitt to White with 1:58 left in the half to make it 17-14 Red Wolves.

Marcel Murray added to A-State’s lead with 10:31 left in the third when he took a handoff from Hatcher 13 yards after Bayless blocked a Texas State punt deep in Bobcat territory. Murray led all players with 22 carries for 114 yards (5.2 yards per carry) and a pair of scores.

A 34-yard punt return by B.J. Edmonds to the Texas State 16 set up Murray’s second score of the night, this one on the very next play for a 16-yard touchdown to push the Red Wolves’ lead out to 31-14 with 4:19 left in the third.

The Red Wolves will hit the road for their next challenge, traveling to Monroe, Louisiana, to take on ULM at 2:30 p.m. CT on Nov. 2 in a nationally-televised matchup on ESPNU. After taking on the Warhawks, A-State will have a bye week followed by its final two home outings against Coastal Carolina (Nov. 16) and Georgia Southern (Nov. 23).

Original article source: http://www.astateredwolves.com//ViewArticle.dbml?DB_OEM_ID=7200&ATCLID=211815074 | Article may or may not reflect the views of KLEK 102.5 FM or The Voice of Arkansas Minority Advocacy Council