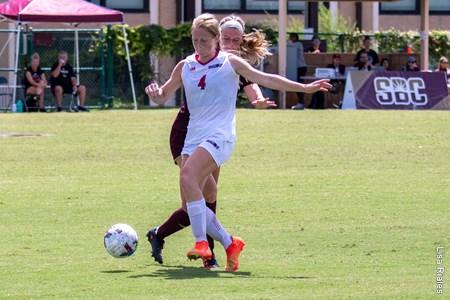 JONESBORO, Ark. (10/16/22) – A Darby Stotts goal at 16:08 proved to be the difference as the Arkansas State women’s soccer team defeated Georgia State a 1-0 Sunday afternoon at the A-State Soccer Park.

With the victory, A-State improves to 7-5-2 on the season and 5-2-0 in Sun Belt play. Georgia State drops to 7-3-5 overall and 3-2-2 in conference action. The Red Wolves victory improved A-State to 20-4-2 over the last 26 regular season conference matches.

Stotts goal in the 17th minute marked her four marker over the last six matches and fifth career goal. Hannah Maupin served the ball down the left side to Mckenzie Robinson where Robinson served the ball toward the left side of the penalty area. Stotts dribbled toward the end line and slotted the ball just inside the far post for the goal. Robinson recorded her second assist of the season while Maupin was credited with her first this season and fourth career.

A-State held the Panthers without a shot on goal in the first half, but the Panthers did not go away quietly. Georgia State put three shots on frame in the final 45 minutes, all stopped by Olivia Luther for her third clean sheet. The Panthers had two more looks graze just past the post to preserve the shutout. It marked just the third time this season Georgia State had been shutout and the fifth shutout by the A-State defense this season, second in league play.

The Red Wolves finished with a 15-9 shots advantage, 8-3 on goal. Jaddah Foos stopped seven shots between the posts for Georgia State. A-State took four corners to the Panthers two and both teams were whistled offside once.

A-State plays its final road contest of the season Thursday, Oct. 20, at 6:00 p.m. CT against Old Dominion. The Red Wolves close out the regular season with the final two matches at home against Southern Miss (Oct. 22) and South Alabama (Oct. 27). For the latest on A-State women’s soccer, follow the team on Twitter (@AStateSoccer), Facebook (/AStateSoccer) and Instagram (@astatesoccer).

Read more from the original source:
Stotts Leads A-State Past Georgia State 1-0. Article may or may not reflect the views of KLEK 102.5 FM or The Voice of Arkansas Minority Advocacy Council