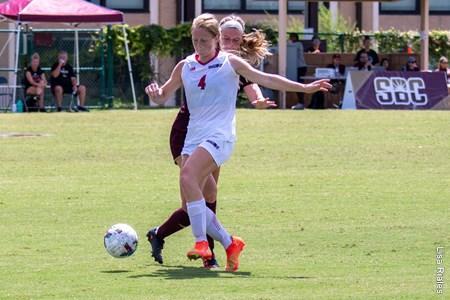 A dramatic final two minutes saw Old Dominion appear to score with just over a minute to play, but the flag was up and the play was deemed offside. A-State took advantage, playing the ball to the other end of the field earning a throw-in deep in the offensive zone.

After a throw in reached the penalty area, Stotts played the ball toward the left side and gathered for a shot to the left post past the Monarchs keeper for the tally. For Stotts, it was her second consecutive game with the game-winning score and her fifth goal on the season, all over the last seven matches.

Olivia Luther registered her second consecutive shutout between the posts for the Red Wolves. Luther stopped all five shots the Monarchs placed on goal to improve to 7-3-1 on the year with four shutouts. Old Dominion held a 15-6 shots advantage, 5-3 on goal.

Continued here:
Stotts Late Goal Lifts A-State to 1-0 Win at Old Dominion. Article may or may not reflect the views of KLEK 102.5 FM or The Voice of Arkansas Minority Advocacy Council