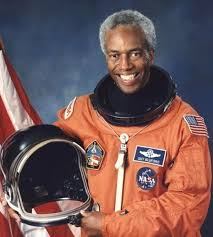 After the box-office success of the Fox 2000 feature film “Hidden Figures” (full disclosure – I worked as a writer on that project) in 2016, several African-American women who worked at NASA and contributed to the space race, such as the recently departed Katherine Johnson, finally became a celebrated part of the cultural zeitgeist.

It was at that time I realized I knew the names of some black astronauts (Mae Jemison, Charles Bolden) – but didn’t know who the first black astronauts were or how they contributed to the space program. So I did some research and was thrilled to learn about Guion “Guy” Bluford, Ron McNair and Frederick Gregory – the first three African-Americans in space (the first person of African descent was Cuban cosmonaut Arnaldo Tamayo Méndez).

Recently, the Smithsonian Channel released the documentary (watch above) “Black in Space: Breaking The Color Barrier” which primarily chronicles the journeys of Buford, McNair and Gregory. To learn more about them, read below:

Buford, McNair and Gregory were all NASA classmates in the “Class of 1978,” when NASA re-invigorated the space program after not sending anyone into space since Apollo 17 took its last journey in 1972.

This was also the class that was the first to train women as astronauts (Sally Ride) as well as the first Asian-American man (Ellison Onizuka).

Out of 8,000 applicants, only 35 were selected. While in the program, the astronauts-to-be spent a year going through a battery of tests, training and simulations to prep them all for potential flight on the NASA space shuttle program. (The Space Shuttle program was instituted to carry huge payloads in space, conduct experiments in space, and also to allow the U.S. and other countries to launch probes and satellites from space to enable further exploration of our solar system, other galaxies and the universe.)

Guy Bluford was from Philadelphia and grew up with a fascination for flight and wanted to be an engineer. While attending Overbrook High School (Will Smith’s alma mater) he told he wasn’t college material – he ignored this discouragement after his parents told him as long as he worked hard, he could do anything. So Bluford worked hard, got into and graduated from Penn State before joining the Air Force in 1964 and becoming a pilot.

Bluford was deployed to Vietnam and there flew over 140 combat missions. He was so schooled in flying that after Vietnam, Bluford remained in the Air Force, and used his skills to train future fighter pilots. In the 1970s, Bluford gets advanced degrees in aerospace engineering and eventually becomes chief of the Air Force’s aerospace laboratory.

Bluford, however, married, with kids, soon became bored professionally and wanted to do more to contribute to flight, science and aerospace. When he hears about NASA’s efforts to recruit and train new astronauts, he applies and gets accepted to the program. In the Penn State tribute video to him (https://www.youtube.com/watch?v=5PY-eva3tnE), it shows images of some of the rigorous “Top Gun”-style training Bluford and the others went through to be deemed space-ready by NASA.

On August 30, 1983, Bluford got his chance to head into space. It was the third flight for the Orbiter Challenger and the first mission with a night launch and night landing. (During the mission, the STS-8 crew deployed the Indian National Satellite (INSAT-1B); operated the Canadian-built RMS with the Payload Flight Test Article (PFTA); operated the Continuous Flow Electrophoresis System (CFES) with live cell samples; conducted medical measurements to understand biophysiological effects of space flight; and activated four “Getaway Special” canisters. STS-8 completed 98 orbits of the Earth in 145 hours before landing at Edwards Air Force Base, California, on September 5, 1983.)

Because Bluford was making history as the first person of African ancestry to travel in space, the night of the launch, there was a crowd people waiting outside in the rain to watch. The astronauts (all four on this mission were rookies) were all trying to save their night vision by keeping cockpit dark – then boosters came on – and they lost all night vision.

Listening to Bluford talk about the whole thing himself is pretty special, especially two revelations: 1) when they listened back to the audiotapes of the launch, they realized one of the astronauts was giggling all the way up into orbit. It was Bluford. 2) the first thing he saw once in orbit was Africa over the horizon. (https://www.youtube.com/watch?v=2CAHJCrKSMg)

While adjusting to zero gravity, two of the flight crew members threw up. Guy was okay and quite comfortable in space. While up there, Bluford was called and congratulated by then-President Reagan.

“Guy, congratulations. You, I think, are paving the way for many others and you are making it plain that we are in an era of brotherhood here in our land. And you will serve as a role model for so many others and be so inspirational. That I can’t help but express my gratitude to you.”

Guy, though happy to have been “the first,” he really, in his words, just wanted to make a contribution to the program. Bluford logged over 700 hours in shuttle program and managed orbital experiments, launched satellites from orbit, etc.

Ron McNair came from rural poverty in Lake City, SC, attended segregated schools but was a  naturally gregarious and spirited young man with an appetite for learning. McNair was at his local Lake City library one day and found some math books he was eager to read. When he tried to check them out he was told he couldn’t.

Instead of walking out of the library empty-handed, McNair sat on the check-out desk refused to leave until he was allowed to borrow the books.

Both the police and his parents were called – even though he wasn’t trying to take a political stand – he just really wanted to read the books – his one-young-man-protest was successful – he was allowed to check them out. (The library where he was initially denied books would decades later become the site for the Ron McNair Memorial and Ron McNair Center for Learning, pictured below.)

McNair’s spirit, curiosity and perseverance led to him eventually earning an engineering PhD from MIT.

McNair was a very social man, a big talker who would talk to anyone from janitors to engineers, and was generally loved at NASA. He was known as a real motivator and leader and larger than life, despite his “small guy” status (height-wise).

This 5th degree black belt and accomplished jazz saxophonist became 2nd African American in space on the Challenger, and he was part of the crew that tested allowing man himself to become a satellite in space (Bruce McCandless II, did the historical spacewalk, pictured a few meters away from the cabin of the Earth-orbiting Space Shuttle Challenger.

This spacewalk represented the first use of a nitrogen-propelled, hand-controlled device called the Manned Maneuvering Unit, which allows for much greater mobility than that afforded previous space walkers who had to use restrictive tethers.). Though the image is officially credited to NASA, Ron McNair is the one who took the famous photo.

McNair’s career as an astronaut, along with six others, was tragically cut short on January 28, 1986 when the Challenger exploded soon after launch. The accident led to a two-and-a-half year grounding of the shuttle fleet. McNair has subsequently been honored by NASA for his contributions and service, as well as inducted into the South Carolina Hall of Fame.

Frederick Gregory was an Air Force and Navy Test Pilot who had no lifelong dreams or intentions of ever becoming an astronaut. He went to the Air Force Academy and majored in  engineering but loved studying Classical English the most and had hopes of one day becoming a history professor.

But one day he saw an advertisement in Aviation Week saying there was a new astronaut-training program at NASA. Then he saw promo materials featuring Nichelle Nichols – NASA had hired Lt. Uhuru from “Star Trek” to help recruit women and minorities to the space program – and in Gregory’s own words, she was the biggest motivator for him to go ahead and apply.

Gregory’s first time in space happened to be on a classified military mission in regards to national security, so he couldn’t talk about it to family, friends or the press. He couldn’t even tell his wife where he was going for training and would have to disappear for weeks at a time.

What Gregory could talk about though, was what it was like to go up in space:

“When I launched the first time, I pretty much thought I knew the answer to everything, I thought I‘d seen everything, that this would just be a thrill ride for me. but when I got to orbit and when the main engines cut off and I went from 3g to 0g and my arms floated and everything around me was floating, I had never anticipated anything like that. And when I looked out the window at the heavens and saw how orderly and how in harmony it was, I said to myself… God has put that there for me to see.

And to look down at Earth and see the interaction and reactions of the water and the atmosphere and the dirt and the continents down there, how all of those years of studying all suddenly came clear to me. And then to watch how the body changes very subtly and how you become a space person – an alien – and how simple it is and how all those things that we considered almost impossible initially, were just routine.

So I think the experience for me broadened me significantly. My sense of where I came from went from Washington D.C. to the United States to the World. So I came back as a world citizen as opposed to a citizen from D.C., where I was born. I think that occurs to everyone who flies.”

Later in his NASA career, Gregory was Chief CapCom when the Challenger exploded with his friend Ron McNair and others aboard. He was the weather Capcom and had worked with that particular Challenger crew for 6 months to prep for that mission. He saw a big flash on his monitor – he thought he was looking at solid-rocket booster separation – but then realized the horror that had happened.

Just moments before this happened, even though he wasn’t the transmitter that day, he’d considered speaking to the crew and saying “God speed, Challenger” but didn’t do it. He regrets not saying it to this day. Gregory later became the first African-American to command a space flight in November of 1989, and in 2005 became Acting Administrator for NASA.

Original article source: https://goodblacknews.org/2020/03/07/story-of-1st-black-astronauts-told-in-smithsonian-channel-documentary-black-in-space-breaking-the-color-barrier-watch/ | Article may or may not reflect the views of KLEK 102.5 FM or The Voice of Arkansas Minority Advocacy Council