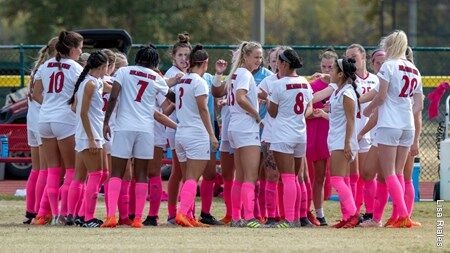 Repping the Red Wolves on this year’s list are Phoebe Harpole, Gertie Langford, Olivia Luther, Abigail Miller, Darby Stotts and Aliyah Williamson. The Academic All-District Women’s Soccer Team recognizes the nation’s top student-athletes for their combined performances on the field and in the classroom. To qualify, student-athletes must maintain a 3.50 GPA, have a minimum of one year completed at their current institution and be a starter or key reserve player, athletically.

Harpole played in all 18 matches, starting 10, while scoring a goal and adding an assist for A-State. She logged 1,009 minutes on the season helping A-State to a 9-6-3 record, 7-2-1 in league play. Academically, she has a 3.97 GPA while pursuing a bachelor’s in nursing.

Langford carries a 4.0 GPA while pursuing a bachelor’s in exercise science. Playing in 16 matches, she was tabbed a starter in five matches at the midfield position.

Starting in goal in 16 of 18 fixtures, Luther finished the year with an 8-4-2 record and five shutouts. She posted a 0.97 goals-against average, tied for the fourth-best in single-season program history. In the classroom, Luther carries a 3.74 GPA while pursuing a bachelor’s in dietetics.

Miller started in all 18 matches and played over 1,400 minutes in the midfield. She had a goal and assist on the season and helped the defense post seven total shutouts, third-most in program history in a season. She carries a 3.79 GPA pursuing a bachelor’s in interdisciplinary studies.

Returning from injury a season ago, Stotts led the Red Wolves with six goals and 15 total points while playing in all 18 matches. Three of her six markers were game-winners, all coming in league play. Stotts carries a perfect 4.0 GPA pursuing a bachelor’s in elementary education.

Williamson finished second on the team with 11 points, scoring four goals and assisting on three others in her sophomore campaign. She played in all 18 matches while starting 17 fixtures. She carries a 3.69 GPA pursuing a bachelor’s in psychology.

Read more:
Six Red Wolves Tabbed College Sports Communicators Academic All-District. Article may or may not reflect the views of KLEK 102.5 FM or The Voice of Arkansas Minority Advocacy Council