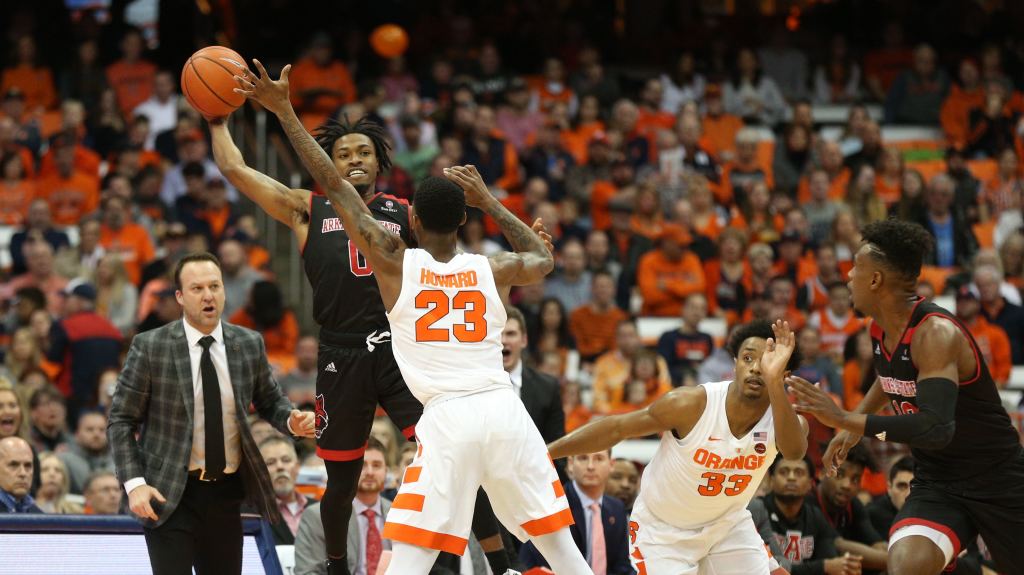 SYRACUSE, N.Y. (12/22/18) – Arkansas State and Syracuse were tied at 36 just before halftime, but Syracuse proved too much for the Red Wolves in the second half as A-State fell 82-52 Saturday afternoon at the Carrier Dome.

“I thought for the first 20 minutes we executed the game plan to perfection,” said A-State head coach Mike Balado. “We shared the ball well as we had nine assists and only four turnovers at the half. We took some chances in the second half with things we did not work on. We had guys trying to break off plays and we end up with 17 turnovers and I think that was the key to the game. We always say one of our goals is to make more free throws than our opponent attempts. Today, Syracuse was 27-of-33 and we only got to the line 15 times. We’ve got to be more aggressive and when we get in the paint we have to be strong with it. I think that’s where a lot of our turnovers happened as guys were trying to take shots that weren’t there.”

The Red Wolves came out firing, building an 11-point lead, 26-15, midway through the first half. Syracuse chipped away at the deficit to lead 38-36 by halftime. The Orange took advantage at the charity stripe with 17 of those 38 points coming at the stripe. Syracuse was 17-of-22 (77 percent) at the line while A-State hit 60 percent (6-10) in the first frame.

A-State was out-rebounded 37-30 and Syracuse forced 13 second half turnovers to win the turnover battle 17-8. The Orange scored 15 points off turnovers in the second half alone and finished with a 24-6 advantage.

A-State returns to First National Bank Arena to close non-conference play with a contest versus Harding at 7:00 p.m. on December 29. For the latest on A-State men’s basketball, follow the Red Wolves on Twitter @AStateMB, at Facebook.com/AStateMB and on Instagram at ‘AStateMB’.

Original article source: http://www.astateredwolves.com//ViewArticle.dbml?DB_OEM_ID=7200&ATCLID=211784579 | Article may or may not reflect the views of KLEK 102.5 FM or The Voice of Arkansas Minority Advocacy Council