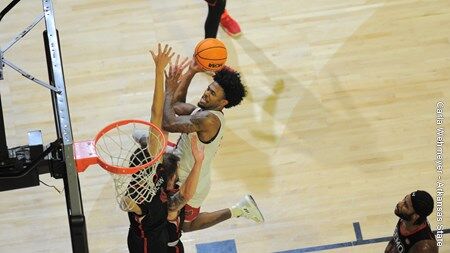 Arkansas State outscored SEMO 34-8 in the paint and won the rebounding battle 41-32. Izaiyah Nelson scored 13 points on 4-of-4 shooting while grabbing nine rebounds, with Omar El-Sheikh grabbing a team-high 14 boards to go along with nine points.

The Red Wolves held SEMO to 38.3 percent shooting on 18-of-47, including just 9-of-25 (36.0 percent) in the second half. Adam Larson led all players with 19 points and Phillip Russell added 13. Chris Harris scored 10 points to round out double-figure scorers while Kobe Clark recorded a game-high 16 rebounds and eight points.

Baskets were hard to come by early, with both teams going on lengthy scoring droughts. SEMO led by as much as eight after a Larson trey made it 24-16 with 3:13 remaining in the first half, but the Red Wolves pulled within two with six unanswered. The Redhawks held off the late run to lead 26-24 at the break.

The Redhawks battled back to make it 56-53 on a Harris trey, but A-State continued to match them score-for-score to hold on in the second half.

Arkansas State continues its three-game home stand Monday, hosting Alabama State in the penultimate non-conference game. Tip-off against the Hornets is set for 7 p.m. on ESPN+. The contest can also be heard on the EAB Red Wolves Sports Network, including flagship station 107.9 KFIN in the Northeast Arkansas area.

Read more:
Second-Half Surge Moves A-State Past SEMO. Article may or may not reflect the views of KLEK 102.5 FM or The Voice of Arkansas Minority Advocacy Council