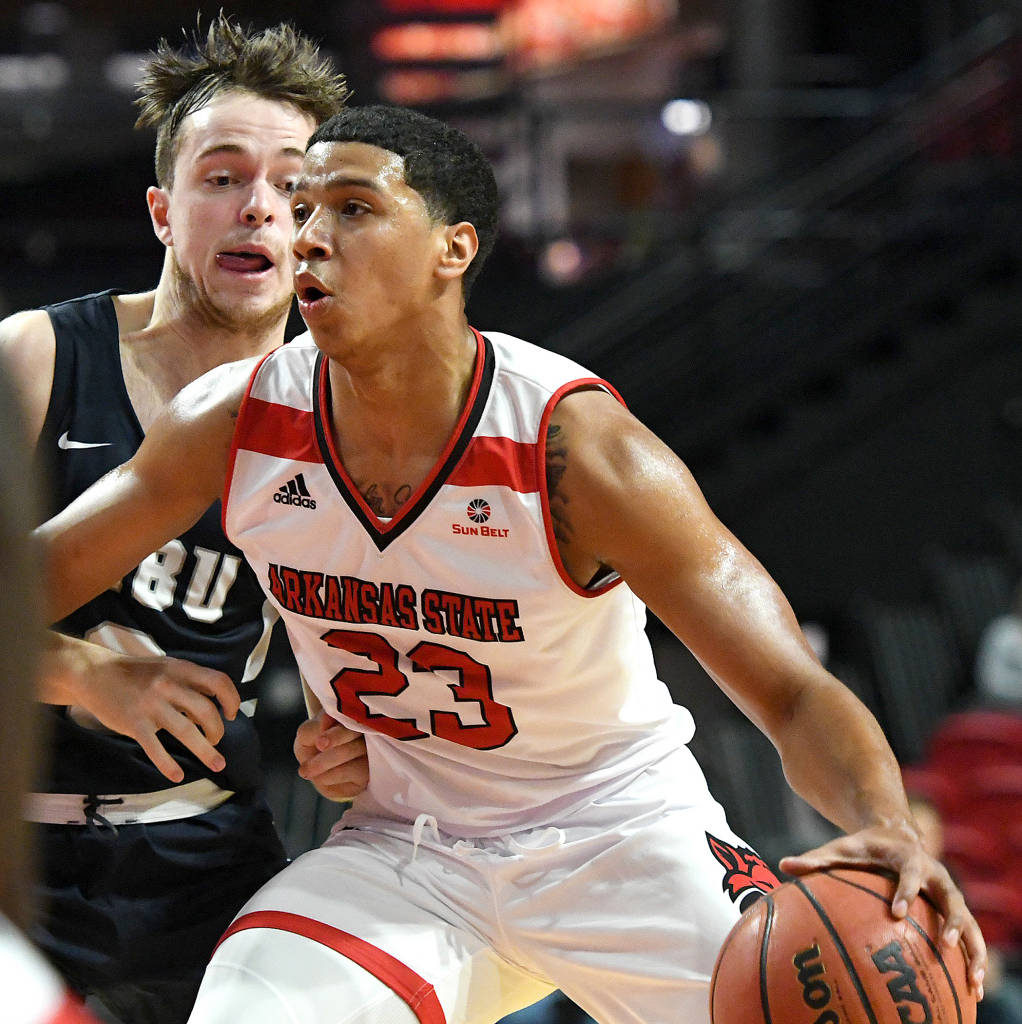 ASHEVILLE, N.C. (11/23/18) – A 15-4 run to start the second half proved to be enough as UNC-Wilmington defeated the Arkansas State men’s basketball team 78-64 Friday night in the first of three games for the Red Wolves at the VisitCurrituckOBX.com Battle in the Blue Ridge.

A-State (1-3) led 32-29 at the half, but UNC-Wilmington (2-3) outscored the Red Wolves 49-32 in the second half. Marquis Eaton had a career-high 19 points while Canberk Kus added 14 to join in double figures. Grantham Gillard had six rebounds to lead A-State while Shaquillo Fritz and J.J. Matthews added four boards. Devontae Cacok led the Seahawks with a double-double of 17 points and 10 rebounds.

“Offensively, we didn’t shoot the ball well at all tonight,” said A-State head coach Mike Balado. “I don’t know how many times Ty (Cockfield) will go 2-for-10 and Grantham (Gillard) go 1-for-6, but they just didn’t fall. UNC-Wilmington shot better in the second half and got the ball inside and crashed the offensive glass. We’ve got to do a better job of keeping guys off the glass and get our guys confidence to hit shots when they are open.”

UNC-Wilmington opened the second half on a 15-4 run to turn the three point halftime deficit into a 44-36 advantage with 15:33 to play. An old-fashioned three-point play by Matthews pulled A-State to within six, 47-41, but a 6-0 run got the Seahawks back to double digits and UNCW never looked back.

The Red Wolves depended on the 3-point shot in the first half and used it to take a 32-29 halftime lead. Trailing 7-6 with 15:20 left in the period, Eaton knocked down three-straight 3-pointers and Kus followed with two more as A-State led 20-17 with 9:33 to play.

UNC-Wilmington pulled even at 24-24, but A-State scored the next four points with a bucket by Walley and a pair of free throws from Fritz to regain the lead. Both teams struggled from the field the final four minutes of the half as the two teams did not score for nearly three minutes. Cockfield ended the drought with a 3-pointer with 55 seconds left in the half and the Seahawks answered with a layup to set the halftime score at 32-29.

A-State continues play in the visitcurrituckOBX.com Battle in the Blue Ridge with Saturday’s contest against Eastern Illinois. Tip-off is scheduled for 4:00 p.m. (CT) from Asheville, N.C.

Original article source: http://www.astateredwolves.com//ViewArticle.dbml?DB_OEM_ID=7200&ATCLID=211781624 | Article may or may not reflect the views of KLEK 102.5 FM or The Voice of Arkansas Minority Advocacy Council