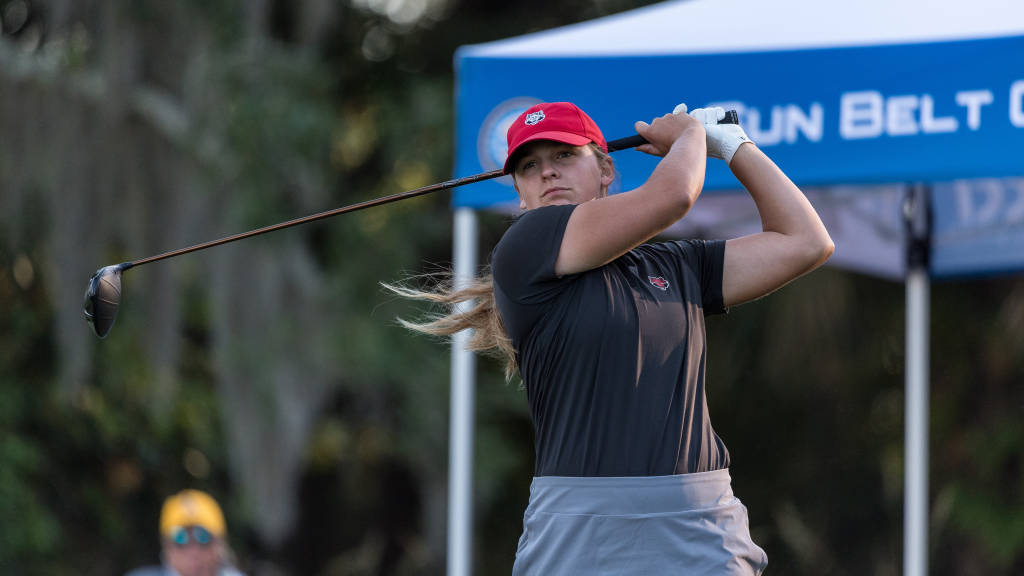 Schmidt carded a season-best 68, while the Red Wolves’ 294 team total tied their second best score of the year.  The freshman standout ended Monday’s opening round tied for 31st place with a 77, but jumped all the way into a team-leading tie for fifth place with her second-round performance.  She is currently three strokes behind co-leaders Siti Shaari of South Alabama and Anne-Charloette Mora of Texas State.

The Red Wolves cut five strokes off their first-round score today on the Arthur Hills Course at the LPGA International, but remained in fifth place.  They ended the second 18 holes just four strokes behind fourth-place Georgia Southern and within five of third-place Troy.  South Alabama is in first place with a combined 585, while Texas State stands second with a 586.

Including Schmidt, A-State has four players currently among the top 24 leaders.  Sophomore Maria Jose Atristain Vega is only two strokes behind her freshman teammate with a combined 147 (73-74), which places her tied for 11th in the standings.

The third-and-final round of the Sun Belt Conference Championships is set to begin at 7:00 a.m. CT Wednesday.

Original article source: http://www.astateredwolves.com//ViewArticle.dbml?DB_OEM_ID=7200&ATCLID=211800118 | Article may or may not reflect the views of KLEK 102.5 FM or The Voice of Arkansas Minority Advocacy Council