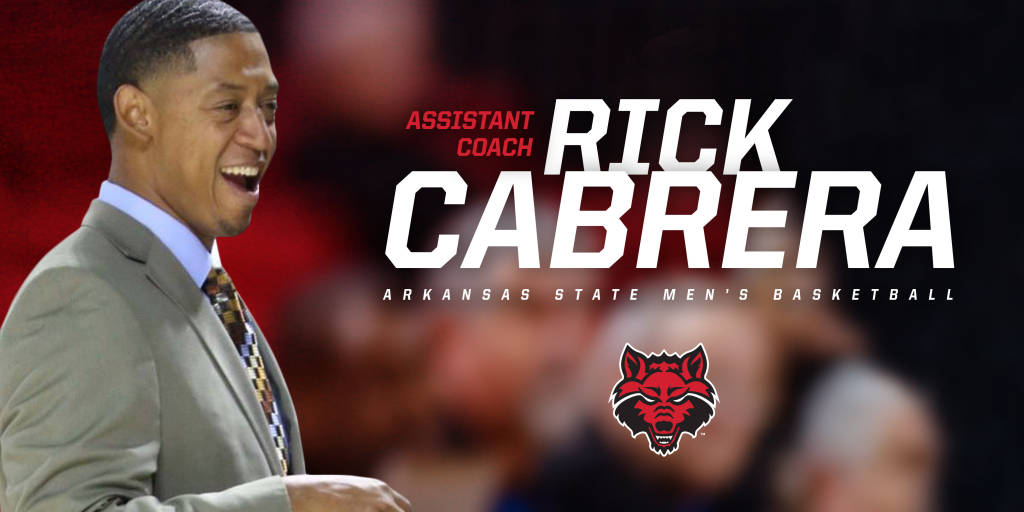 “We’re very excited to have coach Cabrera join our Arkansas State family,” said Balado. “I’ve known coach Cabrera for over 20 years now seeing him grow through the business and I’m excited to have him bring his energy, recruiting and coaching experience to our program. We are excited to welcome Rick, his wife, Danielle, and their kids; Mikayla, Jaden, Braxton and Landon, to Jonesboro. He and his family are a great fit for our program and I know he will connect with our players and fans.”

“I would like to thank Coach Balado for this wonderful opportunity to be a part of his staff here at Arkansas State,” said Cabrera. “I have known Mike for over a decade and followed his growth in this profession. I believe in his vision to bring A-State to the top of the Sun Belt. I’m looking forward to getting our guys better this summer and hitting the recruiting trail for future Red Wolves.”

A former guard for Tennessee Tech, Cabrera spent five seasons on the sidelines at his alma mater ascending to associate head coach duties in 2015-16. He spearheaded recruiting for the Golden Eagles helping the 2015-16 squad to its first postseason appearance in four years with a bid in the inaugural Vegas 16 Tournament.

Cabrera spent the 2008-12 seasons at Chattanooga helping the Mocs win two Southern Conference North Division titles. The 2008-09 team went on to win the SoCon Tournament and gain a berth into the NCAA Tournament.

Known for his strong reputation as a recruiter, Cabrera served as head coach at Lackawanna (NJCAA) for four years accumulating a record of 100-28 and winning two region titles. He coached three NJCAA All-Americans, eight All-Region players and was named region Coach of the Year in 2005 and 2006.

Cabrera logged two seasons as an assistant coach at Keystone College (2002-04) and spent the 2001-02 season as an assistant for Miami (Fla.) Killian High School. He was also head coach and athletics director for one season (1998-99) at Volunteer Christian Academy in Sparta, Tenn. He got his coaching start at his alma mater, spending a season as a graduate assistant under Jeff Lebo and earning his master’s in instructional leadership in 2001.

As a collegiate player, Cabrera transferred to Tennessee Tech after two seasons at Vincennes University where he played with future NBA player Tyrone Nesby. He played two seasons for the Golden Eagles under head coach Frank Harrell and was named the team MVP and Sam Harley Lynn Award winner in his senior season.

He earned his Multidisciplinary Studies degree in 1999. His father, Hugo Cabrera Sr., was voted as the Dominican Republic’s “Player of the Century” and is in that country’s Basketball Hall of Fame. Rick has also played professional basketball in the Domincan Republic.

Cabrera is married to the former Danielle Olker of Queens, N.Y. The couple has a daughter, Mikayla, and three sons, Jaden, Braxton and Landon.

Original article source: http://www.astateredwolves.com//ViewArticle.dbml?DB_OEM_ID=7200&ATCLID=211802932 | Article may or may not reflect the views of KLEK 102.5 FM or The Voice of Arkansas Minority Advocacy Council