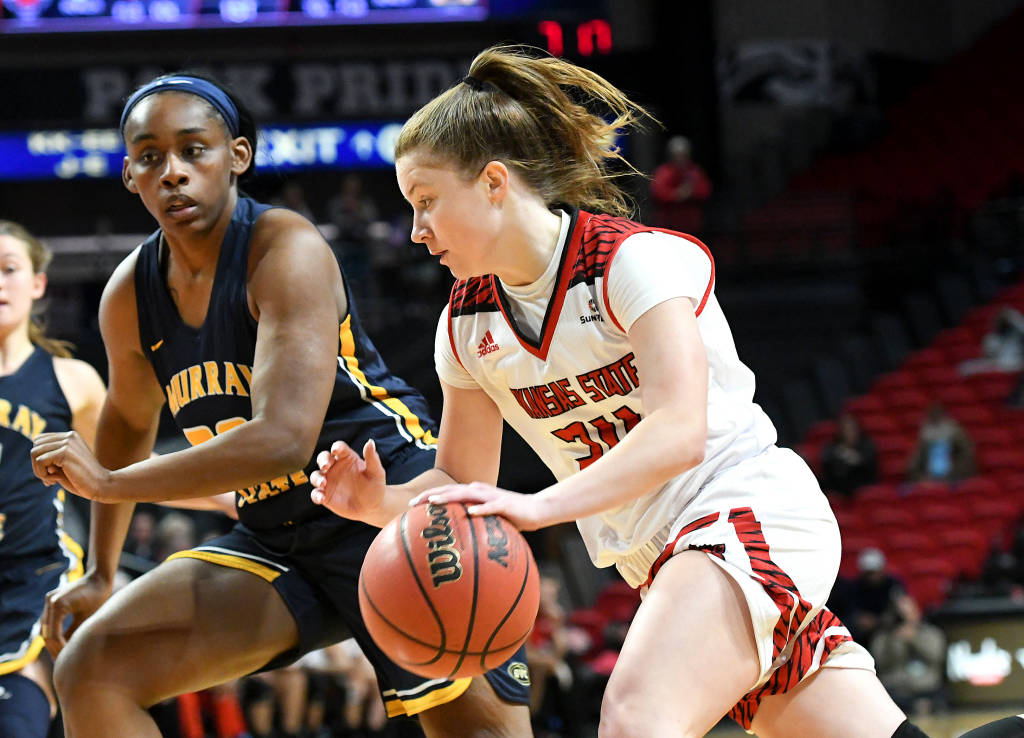 A-State (3-4) trailed for much of the afternoon but rallied from a 10 points deficit to pick up the program’s first win in El Paso since the 1989-90 season. Westbrook’s winning sequence was set up by a drive from freshman guard Jireh Washington who drew the defense to her and then dished the ball to Westbrook who made the layup and converted the layup to go up by one.

UTEP (2-5) called a timeout to advance the ball past half court, but could not find an opening in the Red Wolves’ man-to-man defense and turned the ball back over to A-State with Neidy Ocuane was called for an offensive foul with 0.5 seconds to go as she drove toward the basket.

Westbrook finished with 12 points, while Peyton Martin led the way with 21 points and eight rebounds.

“This game was honestly about what I expected,” A-State head Brian Boyer said. “When you look at their last three or four games they have all come down to the end like this and honestly as a coach I’m just hoping it ended up like this because you aren’t going to come in here and win by a big margin because they are just too disciplined and you just hope you can give yourself a chance late and obviously that is what we did.”

Arkansas State’s fourth-quarter comeback was sparked when Jordan Elder opened the period with a 3-pointer that cut the lead to 48-46. The shot sparked the A-State offense, which had struggled to hit key shots throughout most of the afternoon.

Washington gave A-State a 51-50 lead after she knocked down 1-of-2 free throws and Elder hit her second 3-pointer later in the quarter to put her squad up by six.

“Peyton Martin was just good,” Boyer said. “The one thing about it was that UTEP’s post players didn’t want to foul and Peyton was so aggressive against inside against her. Westbrook has some big plays tonight and Jireh Washington driving the lane and making that dish was just phenomenal and then I don’t think you can’t say enough about the spark Jordan Elder gave us at the start of the fourth quarter.”

Arkansas State made UTEP uncomfortable on the defensive end in the fourth quarter and it showed on the free throw line where the Red Wolves had 15 attempts over the final 10 minutes. The Miners entered the game having committed no more than 11 fouls in each of their last three games, but the Red Wolves forced them into 19 on the afternoon.

In addition, A-State’s effort on the defensive end helped keep the team within striking distance at times when the offense struggled. Nine of the Miners 23 turnovers were steals for the Red Wolves.

UTEP was led offensively by Ariona Gill, who scored 17 points.

A-State returns to action Sunday, Dec. 9 for an afternoon matchup at First National Bank Arena against Tulsa. Tip-off is set for 2:00 p.m.

Original article source: http://www.astateredwolves.com//ViewArticle.dbml?DB_OEM_ID=7200&ATCLID=211782470 | Article may or may not reflect the views of KLEK 102.5 FM or The Voice of Arkansas Minority Advocacy Council