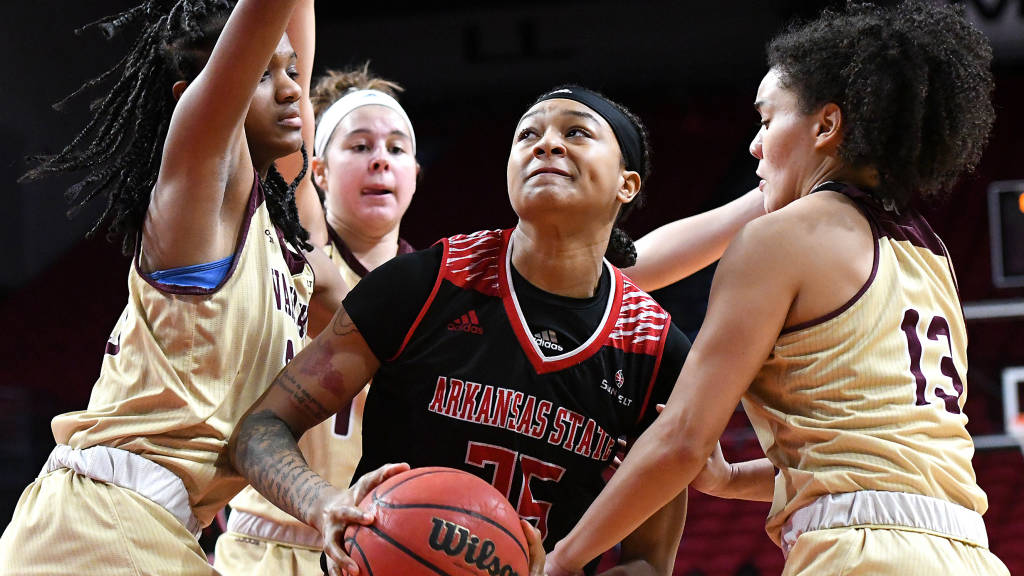 Ford led A-State off the bench with a season-high in points thanks to a 6-of-7 mark from beyond the arc to help the Red Wolves move to 7-6 on the year and 2-0 in Sun Belt Conference play. With the loss, ULM fell to 6-7 and 0-2 in the league. Payton Tennison also finished in double-figures with 11 points, while Peyton Martin added 10 points and six rebounds.

Saturday’s game featured 13 lead changes, but none after the 3:23 to go in the third quarter when Trinitee Jackson knocked down two free throws to put A-State ahead 42-41. A 9-0 run in the fourth quarter stretched the lead to double-figures for the first at 58-48 after 3-pointers by Ford and Tennison and a strong effort in a zone defense helped spark the run.

The Red Wolves were able to take away the Warhawks’ ability to drive the ball to the basket late in the matchup and came away with key rebounds as ULM tried to chip away at the lead. A pair of free throws by ULM’s Amber Thompson got the deficit down to 58-52, but Akasha Westbrook answered on the opposite end with a pull jumper and Martin got a layup off one of six assists for Jireh Washington to stretch the lead back to 10 points.

“This is two games in a row where we’ve had more assists than turnovers and that’s really good to see,” Boyer said. “It isn’t a stat line I always look at it because of how hard we attack off the dribble and the tends to keep our assists down, but what has been good is lately these teams are sagging so much defensively on us and we can’t get to the rim so it is good to see us making the extra passes.”

Arkansas State will take to the road for the first time in the league when it travels to South Alabama to take on the Jaguars Thursday, Jan. 10 at the Mitchell Center. The game is set to tip-off at 7:05 p.m. and will air on ESPN+.

Original article source: http://www.astateredwolves.com//ViewArticle.dbml?DB_OEM_ID=7200&ATCLID=211785691 | Article may or may not reflect the views of KLEK 102.5 FM or The Voice of Arkansas Minority Advocacy Council