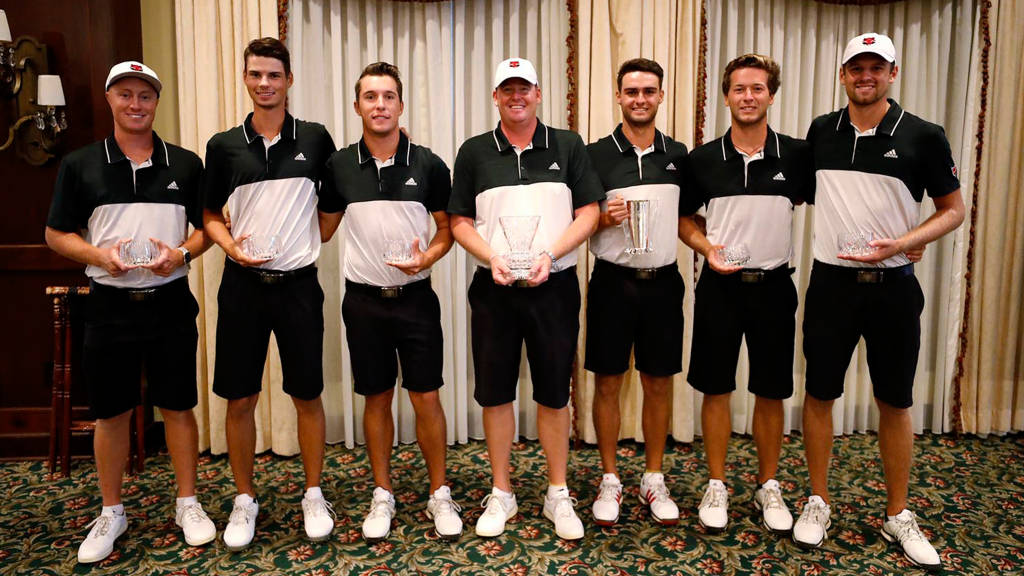 With a strong performance each of the first two rounds by an A-State squad that shot a combined 23-under-par 553, the Red Wolves built a 12-stroke lead over runner-up Iowa entering today’s scheduled play. Not only did A-State finish ahead of the host Hawkeyes, they also placed ahead of preseason No. 21 UCLA and four other teams that completed last season ranked among the top 100 programs in the nation.

A-State also topped programs such as Kansas State and Boston College on its way to becoming the first team that is not a member of a Power Five conference to win the Golfweek Conference Challenge, now in its 10th annual year.

The Red Wolves claimed their 11th all-time tournament title under Mike Hagen, who took over as head coach before the start of the 2015-16 season. A-State collected a runner-up finish at its season-opening tournament, the Lone Star Invitational, and has now placed runner-up or better in six of its last eight tournaments.

“We knew this would be a tough tournament coming into it, but that’s why we scheduled it,” said Hagen. “I was really happy with the way we played last week at our first tournament and we looked good in the practice round, so I liked our attitude and the way we were performing heading into Sunday.

“We were in the driver’s seat after that first round, and I was pleased with the way our guys answered the call (Monday) knowing that we had (Iowa) here with all their fans out there and playing on a course they’ve played every year. We played really good team golf throughout the entire tournament.”

While the Red Wolves got a championship performance from junior Julien Sale, they also had three additional players finish among the top 13 individuals in senior Joel Wendin, freshman Luka Naglic and junior Zan Luka Stirn.

Sale collected medalist honors by shooting a 136 (69-67), giving him a three-stroke advantage over three other players finishing tied for second. Stirn also took home co-champion honors at the Lone Star Invitational, giving Arkansas State an individual medalist in each of its first two tournaments this season.

“I am very proud of our entire team,” said Hagen. “It was great to see Julien come in, play very well and get the win in his first collegiate event with our team. Joel had another solid tournament after finishing fourth in our first event, and it was nice to see Zan Luka come back strong after winning last week. Luka wasn’t happy with his first-round 74, but responded with a 66 the next day. Jakub had a top-30 finish last week and shot a 70 on Sunday, so everyone continues to do some very positive things.”

Texas A&M is currently ranked fourth in the nation in the Bushnell Golfweek Division I Coaches Poll, while New Mexico, North Florida, SMU and Tennessee are all receiving votes.

Original article source: http://www.astateredwolves.com//ViewArticle.dbml?DB_OEM_ID=7200&ATCLID=211772534 | Article may or may not reflect the views of KLEK 102.5 FM or The Voice of Arkansas Minority Advocacy Council