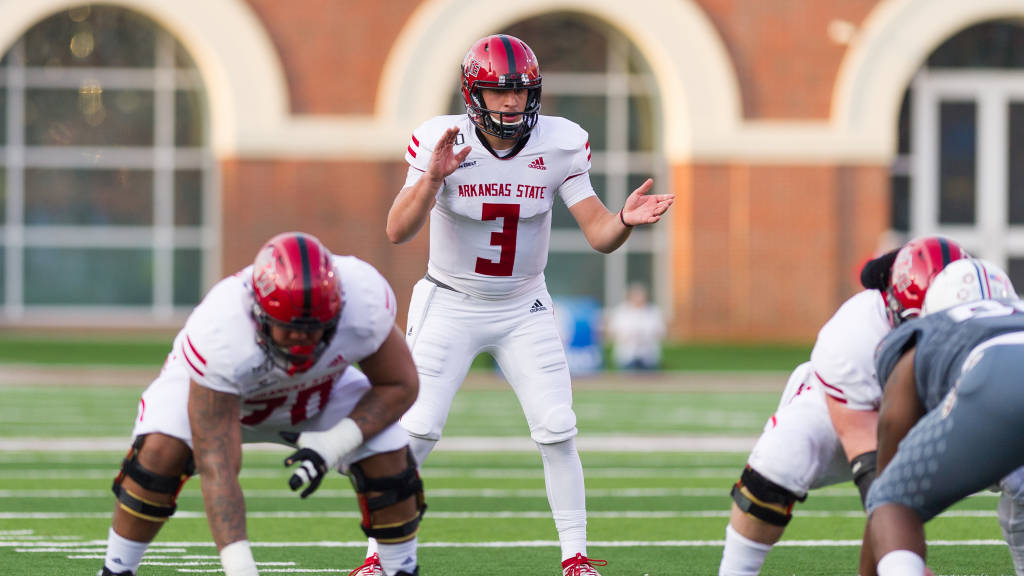 TROY, Ala. (9/28/19) – An offensive shootout on Saturday night at Veterans Memorial Stadium ended on a high note for Arkansas State football, with the Red Wolves coming away with an exciting 50-43 victory at Troy in the Sun Belt Conference opener.

“I don’t know if I’ve ever been prouder of a group of guys, to have that many go down and more tonight and to keep battling against a really good football team,” head coach Blake Anderson said. “They just found what it took. We didn’t leave a bullet in the chamber. We used every one of them to get this one and I’m super proud of our guys.”

In his first career start, freshman Layne Hatcher did not disappoint, carving up the Troy defense for 440 yards on 25-of-35 passing with four touchdowns. Even more impressively, Hatcher did so by finding six different receivers, most notably Omar Bayless (213), Jonathan Adams (105) and Kirk Merritt (103), who all recorded 100-yard nights. Bayless’ career-best 213 yards stands as the third-most in program history.

A-State wasted no time in putting points on the board, with Hatcher finding Bayless for a 92-yard strike on the Red Wolves’ first offensive play, the second-longest play in program history. Three plays later, Logan Wescott gave the Red Wolves a two-score lead when he scooped up a Troy fumble by quarterback Kaleb Barker and returned it 40 yards for the touchdown, jolting the Scarlet and Black to a very quick 14-0 lead.

The Trojans got on the board on their next possession with Tyler Sumpter capping off a lengthy 10-play drive to make it 14-3. Troy then capitalized on a muffed kick return to take over on the A-State 29, with Barker connecting with Tray Eafford on the first play for a 29-yard strike to make it 14-10. Barker completed 34 of his 57 passes for 367 yards and four scores.

Hatcher then, once again, led the Red Wolves on a six-play scoring drive that ended with a 14-yard touchdown pass from Hatcher to Merritt to give A-State a 21-10 lead that held through the first quarter.

Troy inched closer with 11:40 remaining in the first half when Barker found Bret Clark for a 27-yard touchdown after the Trojans stripped and recovered a fumble at the A-State 46.

The Red Wolves responded with Hatcher’s third touchdown pass of the night to increase their lead to 28-17, this time a 45-yard strike to Merritt on a deep route. The Trojans then cut A-State’s deficit again midway through the second with a 7-play scoring drive capped off by a two-yard plunge by Kaylon Geiger. Geiger was Troy’s leading pass-catcher, snagging eight balls for 111 yards. Reggie Todd also collected 100 yards receiving on four catches.

Blake Grupe added three more to the scoring column with 4:30 left in the half with a 36-yard field goal. Troy added another touchdown with just over a minute left in the half on an eight-yard pass from Barker to Khalil McClain that capped off a nine-play, 58-yard drive set up by a 41-yard kickoff return by Geiger. That capped off a high-scoring half with a 31-all deadlock.

On their opening drive following a 57-yard punt by Cody Grace – one of three Grace punts to go 50 or more yards on the night – the Trojans took their first lead of the contest on a 22-yard kick by Sumpter to move ahead 34-31 with 10:25 left in the third.

A-State reclaimed the lead at 38-34 when Jamal Jones rushed seven yards for a touchdown. Two plays earlier, Grace set up the score with a 15-yard completion on fourth down to Brandon Bowling that kept the chains moving.

Sumpter then added another 22-yard field goal to cut the Red Wolves’ lead to one at 38-37 with 5:17 left in the third. On Troy’s next drive, however, the momentum would once again shift.

On fourth down, Bayless burst around the punt protection to block Sumpter’s kick with Jamari Gamble coming up with it on the Troy 32. One play later, Hatcher found Adams for a leaping touchdown grab that gave A-State a 45-37 lead after three.

Troy responded with another 10-play scoring drive capped off by a nine-yard toss from Barker to Geiger. However, Barker was stopped behind the line of scrimmage on the Trojans’ two-point try, leaving the score at 45-43.

The Trojans looked to regain momentum on the ensuing drive, picking off a Hatcher pass at the 1-yard line, but Tajhea Chambers dropped Billingsley in the end zone for a safety, putting A-State ahead by four at 47-43.

Grupe added his second field goal of the night to stretch the Red Wolves’ lead out to 50-43, drilling a short 19-yard kick with just over five minutes left. On the next Troy drive, B.J. Edmonds picked off a deep ball at the A-State 16 to give Hatcher and the offense the ball back.

After Troy intercepted a Hatcher pass and returned it to the A-State 39 with 2:44 remaining, the Trojans threatened, driving down inside the Red Wolves’ 10-yard line. However, due to an injury to a Troy player inside one minute when the Trojans had no timeouts left, a 10-second runoff was assessed with eight seconds left on the clock, ending the contest and sending the Red Wolves home with the victory.

The Red Wolves round out their two-game road stretch to open conference play at Georgia State on Oct. 5 (2:30 p.m. CT) before returning home to face Louisiana in a nationally-televised Thursday night at 6:30 p.m. on ESPNU on Oct. 17.

Original article source: http://www.astateredwolves.com//ViewArticle.dbml?DB_OEM_ID=7200&ATCLID=211812885 | Article may or may not reflect the views of KLEK 102.5 FM or The Voice of Arkansas Minority Advocacy Council