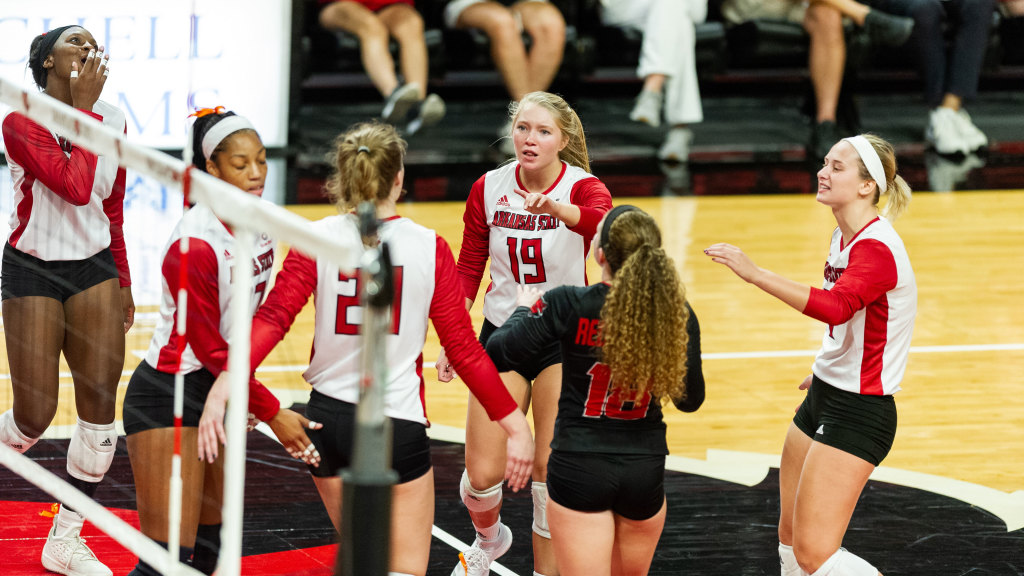 Putt added 11 digs to record her eighth double-double of the year, matching her total from last season. Two of her teammates also posted double-double performances, including Sobolewska who also collected 11 digs. Malgorzata Andersohn continued her impressive freshman season with 19 assists and 10 digs for her team-leading 10th double-double.

Set 1 – Arkansas State 25-18
Both teams came out with a lot of energy, with Arkansas State taking an early lead that would hold from start to finish. After UTA knotted up the set at 6-all, the Red Wolves created some distance by stretching their lead out to as much as six at 17-11, forcing the Mavericks to call a timeout.

UTA bounced back out of the timeout and went on a 4-0 run to cut A-State’s lead to 17-15, forcing the Red Wolves to call a timeout. The Red Wolves closed out the set strongly, taking eight of the last 11 points, the set-clincher coming on an ace by Sobolewska to give A-State an early 1-0 lead in the match.

Set 2 – UT Arlington 25-15
The second set started out quite evenly, with A-State leading 4-2 early before the Mavericks took the lead on a kill by Madison Hill. That lead expanded to 10-5 on a 5-0 run by UTA before the Mavericks held off the Red Wolves down the stretch and evened up the match at a set apiece with a 25-15 decision in the second set.

Putt and Sobolewska each tallied three kills in the set, with Sobolewska adding an ace. Cramer led the charge, handing out seven assists. Defensively, Putt and Timber Terrell teamed up on a block early in the set.

Set 3 – UT Arlington 25-16
The teams continued to duke it out on the offensive side into the third set, trading blows through the first half of the set. After a 3-0 run by the Red Wolves knotted up the set at 11-all, the Mavericks went on an 11-3 run to take the lead and stretch it to 22-14.

A-State fired back with two straight points to cut the deficit to 22-16 on a kill by Davenport and an attack error. UTA then closed out the set on a 3-0 run to take a 2-1 lead in the match.

Terrell and Davenport led the charge with three kills apiece in the set, while Putt added a pair of aces to give her three in the match.

Set 4 – Arkansas State 25-22
Facing a must-win situation in the fourth set, the Red Wolves were unfazed under pressure, taking control at 7-6 on a kill by Madison Brown and never letting UTA claim the lead for the remainder of the set.

After fending off a pair of Maverick runs that cut the deficit to one and tied up the match at 21-all, A-State took four of the final five points to force a match-deciding fifth set. Three of those four points came on kills by Sobolewska.

Sobolewska heated up during the fourth set, firing six kills while Cramer dished out eight assists.

Set 5 – Arkansas State 15-13
A-State quickly gained early momentum in the final set, mounting to a 5-3 lead after a Putt kill. A 3-0 run sparked by kills from Walp and Manderson handed the Mavericks an 11-10 lead before the Red Wolves reclaimed the lead at 13-12 on a kill by Terrell followed by a block by Putt and Brianna Hollingshed.

Facing match point, the Mavericks looked to keep things alive after an A-State service error cut it to 14-13, but Terrell ended things with a kill to propel the Scarlet and Black to victory.

Putt and Terrell led A-State with four kills each in the final set, while Sobolewska fired her fourth ace of the night.

Original article source: http://www.astateredwolves.com//ViewArticle.dbml?DB_OEM_ID=7200&ATCLID=211815789 | Article may or may not reflect the views of KLEK 102.5 FM or The Voice of Arkansas Minority Advocacy Council