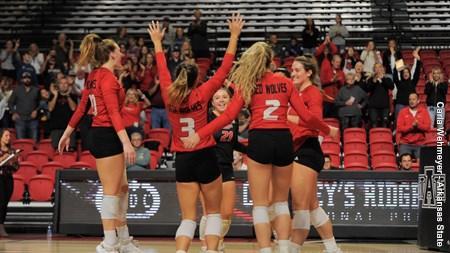 JONESBORO, Ark. (11/5/22) – In her final match inside First National Bank Arena, senior Macey Putt went out on a strong note to lead the Arkansas State volleyball team to a Senior Day sweep over ULM Saturday.

ULM took an early edge to start the first set, but A-State quickly reclaimed control with a 6-0 run that included two of Elise Wilcox’s three aces. Kills by Billings, Wiersema and Bailey Helzer helped surge a 4-0 run that pushed the Red Wolves’ lead out to 16-7. A kill by Putt – one of nine in the opener – gave A-State its largest lead of the set at 21-11 before the Warhawks rallied with four straight to cut it to 21-15. Three more kills by Putt followed to give the hosts set point at 24-15, with an attack error clinching the set for the Scarlet and Black.

A-State never trailed in the second set, leading 10-5 and forcing an early timeout on a block by Billings and Maddie Wiersema. The Warhawks kept it within four until a 4-0 stretch pushed the Red Wolves’ lead out to 21-15. ULM battled back to tie it at 21-all, prompting an A-State timeout, which proved beneficial once Arkansas State took the next four points to win the set and take a 2-0 lead in the match.

Arkansas State rallied from an early deficit in the third to take a three-point lead on a kill by Billings. ULM kept the score tight until once of Putt’s two aces made it 18-13 and forced a Warhawks timeout. ULM would only score twice the rest of the way, as A-State took seven of the last nine points to win the set and claim the match, sweeping the weekend series.

The Red Wolves hit the road for their final test of the regular season, traveling to Huntington, W. Va., for a pair of matches at Marshall (7-19, 1-13). First serve inside the Cam Henderson Center is slated for 5 p.m. CT Thursday and Friday on ESPN+.

Continued here:
Red Wolves Sweep Warhawks on Senior Day. Article may or may not reflect the views of KLEK 102.5 FM or The Voice of Arkansas Minority Advocacy Council