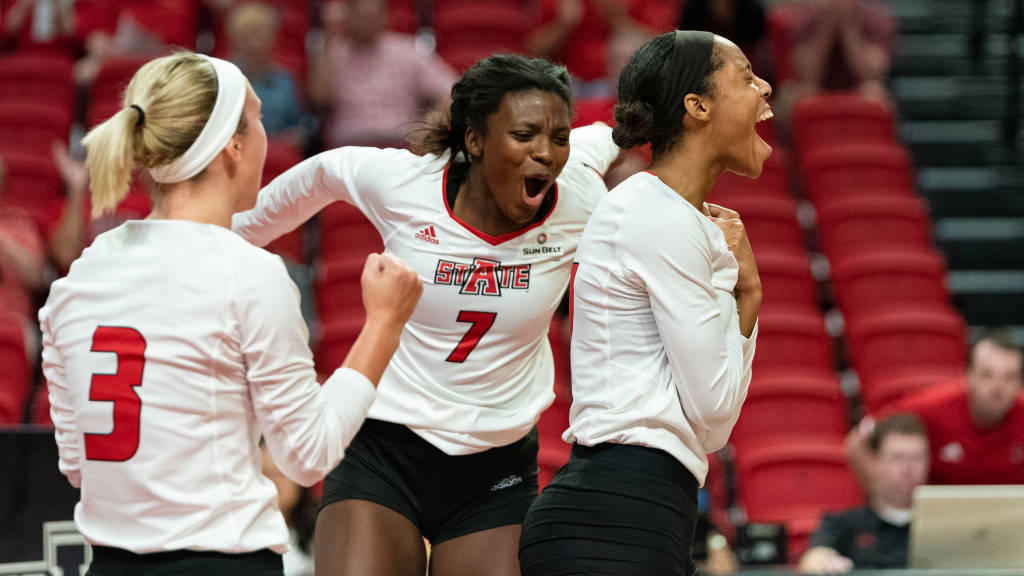 Macey Putt once again had a hot night on the offensive end, tallying a match-high 15 kills on a sparkling .333 attack percentage to lead the Red Wolves (11-5, 2-2 SBC) to their second straight victory of the weekend. With the win over the Mavericks (10-6, 2-2), A-State has now won three straight at home to start the year and four of its last five.

“It was very good to be home, first and foremost,” head coach Santiago Restrepo said. “Secondly, we did a very good job serving and passing. I thought our blocking caused a lot of deflections and our defense behind the block was pretty good and gave us a chance to put the ball away. I’m extremely happy with our performance this weekend.”

The Scarlet and Black also bettered its mark when taking the first two sets, improving to 8-0 this season and 36-0 since the 2017 campaign.

Set 1 – A-State 25-17
UTA took an early 6-3 lead, but that advantage was short-lived as the Red Wolves rattled off five points in a row to take an 8-6 lead that would hold for the rest of the set. A-State would go on to expand that lead to as much as 10 (22-12) behind three straight aces by Cramer and three Putt kills.

In addition to Putt, Uhlenhake also tallied three kills in the opening set.

Set 2 – A-State 25-23
The second set was much different than the first, featuring 17 total ties after UTA took an early 4-0 lead. Following a service error to give the Mavericks a 23-22 lead, kills by Uhlenhake, Madison Brown and Putt gave the Red Wolves the output needed to take the set and move ahead 2-0 in the match.

Set 3 – A-State 25-23
Looking to close out the match, A-State mounted to an early lead that would stretch to as much as eight on multiple occasions. Down 23-15 to the Red Wolves, UTA claimed eight of the next nine points to pull within one, including three saved match points.

However, the Red Wolves would stave off the Mavericks’ comeback attempt, ending things on a Putt kill – one of her eight in the set.

The Red Wolves continue their four-match home stand next weekend, taking on two of the top teams in the Sun Belt Conference’s East Division in Appalachian State (Friday, Oct. 11) and Coastal Carolina (Saturday, Oct. 12). Both matches are slated for first serves at 6:30 p.m. CT at First National Bank Arena.

Original article source: http://www.astateredwolves.com//ViewArticle.dbml?DB_OEM_ID=7200&ATCLID=211813523 | Article may or may not reflect the views of KLEK 102.5 FM or The Voice of Arkansas Minority Advocacy Council