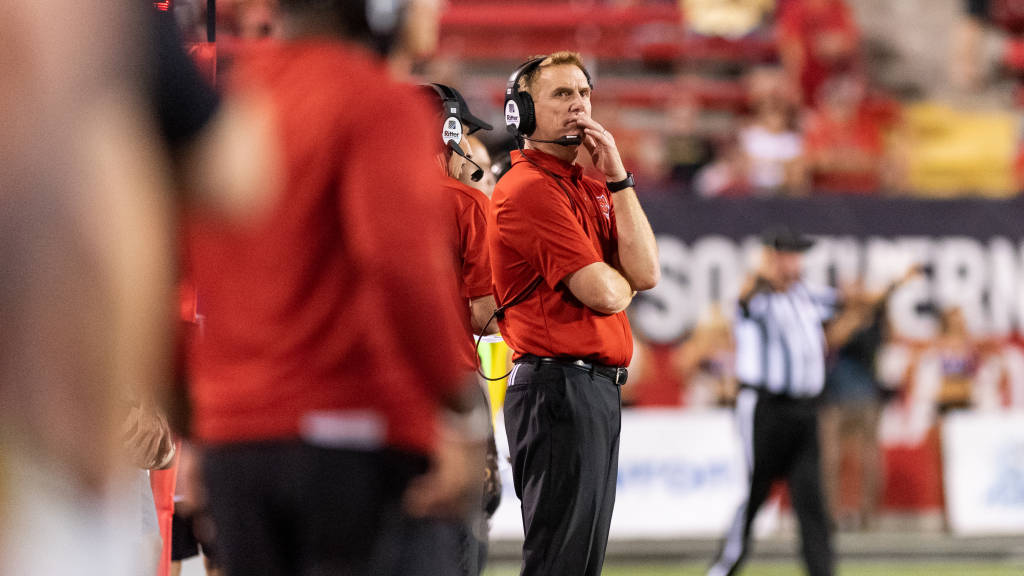 Prior to the team’s arrival at the stadium, Anderson surprised his players at the team meeting, ending his leave of absence that began prior to the death of his wife Wendy on August 19.

Once the ball was kicked off, the Red Wolves (1-1) racked up 498 yards of total offense against the Rebels (1-1), while the A-State defense stymied UNLV’s dual-threat signal-caller to just 42 yards passing and a net of just four yards on the ground in the victory.

“It was a good complete win,” Anderson said. “There were a lot of emotions wrapped up into today with me not telling them that I was coming back. Their reaction was a big spark and I liked the way they handled things emotionally, especially with how hard it is to compete on the road. I challenged them to just do the simple things, and I thought they did. We didn’t have many mistakes, didn’t turn the ball over, scored on defense and played solid on special teams. That’s a pretty complete football game.”

The Red Wolves struck first when Jeremy Smith picked off an Armani Rogers pass and returned it 35 yards for the score with 13:45 in the first quarter. Smith’s pick six was the first by a Red Wolf since Justin Clifton against ULM on Nov. 17 of last season. Blake Grupe added three more later in the first when he drove through a 26-yard field goal to give A-State a 10-0 lead after one period.

Early in the second quarter, UNLV got on the board on a 27-yard field goal by Daniel Gutierrez before the Red Wolves reeled off 20 unanswered points.

A-State then turned to the ground game for its next score, utilizing the legs of Marcel Murray and Logan Bonner for all five plays after the Rebels shanked a punt that left the Red Wolves in prime field position at the UNLV 31.

Murray reeled off runs of seven, nine and 14 yards that got his offense down to the UNLV 1, which was when Bonner dove forward two plays later for the score. A-State led 17-3 with 8:45 remaining in the half. In one half of action, Murray rushed 10 times for 59 yards.

Bonner then led his offense on another scoring drive that took 11 plays to go 80 yards, capped off by a nine-yard scamper by Ryan Graham. The PAT was blocked, leaving the Red Wolves with a 23-3 lead going into the locker room. On the drive, Graham rushed five times for 37 yards, while Bonner connected with Brandon Bowling and Jonathan Adams twice each, in addition to Omar Bayless.

In his second start, Bonner completed 22 of 37 passes for 284 yards and two touchdowns. Bayless once again led the A-State receiver corps, hauling in six passes for a career-high 149 yards and a score. Graham provided valuable production off the bench, rushing 12 times for 103 yards, averaging an impressive 8.6 yards per carry.

The Red Wolves did not miss a beat on their opening drive after halftime, with Bonner linking up with Kirk Merritt for a 37-yard strike, Merritt’s first score of the year. That play capped off an eight-play, 75-yard drive and pushed the lead up to 30-3. In Merritt’s first full game, he did not disappoint, grabbing four passes for 52 yards.

UNLV halted its scoring drought midway through the third quarter with a quick scoring drive propelled by Charles Williams, who reeled off a run of 78 yards that led to a three-yard score the very next play to cut the deficit to 30-10. However, A-State responded on the next drive with a 38-yard field goal by Grupe that capped off a seven-play, 54-yard drive.

The onslaught continued into the fourth quarter when Bonner found Bayless for a 71-yard strike with 12:58 remaining that upped the Red Wolves’ lead to 40-10. That score marked the fifth receiving touchdown for Bayless after the Laurel, Miss., native found the end zone four times in last week’s season opener against SMU.

With 3:33 left in the contest, Grupe drove through his third field goal of the night from 31 yards out to up the lead to 43-10. The Rebels responded with a late score with under two minutes remaining when backup quarterback Kenyon Oblad found Randal Grimes for a 56-yard score.

Defensively, the Red Wolves were led up front by the dynamic duo of Forrest Merrill and Kevin Thurmon. Merrill finished with a season-high 2.0 sacks, while Thurmon added 1.5 sacks to go along with seven tackles. For the 41st time in the last 44 games, the A-State defense has registered at least 5.0 tackles for loss.

The Red Wolves conclude their first road stretch of the season Sept. 14 at No. 3 Georgia. Kickoff from Sanford Stadium in Athens is slated for 11 a.m. CT on either ESPN or ESPN2. Then, A-State will return home to close out non-conference play in the friendly confines of Centennial Bank Stadium, hosting Southern Illinois at 6 p.m. on Sept. 21.

Original article source: http://www.astateredwolves.com//ViewArticle.dbml?DB_OEM_ID=7200&ATCLID=211811114 | Article may or may not reflect the views of KLEK 102.5 FM or The Voice of Arkansas Minority Advocacy Council