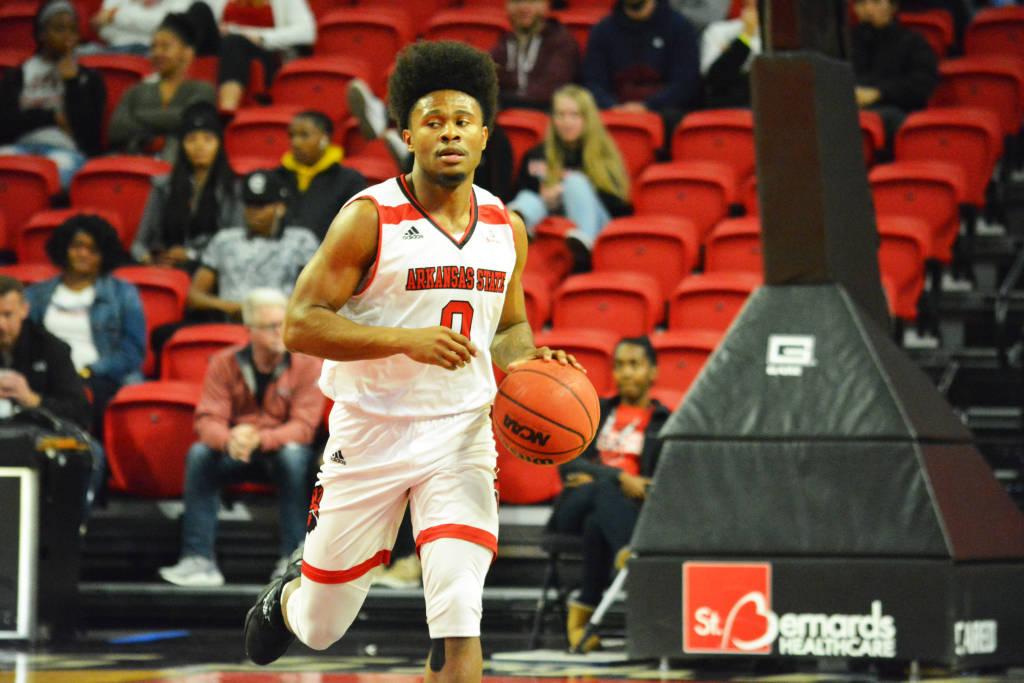 “This was fun and I’m still short of breath,” said A-State head coach Mike Balado. “My guys tonight, I love every one of these guys so much. They fought so hard, down 17 on the road, to come back. We had to play through foul trouble, three starters fouled out and the bench came in and gave us a big lift.

“I thought Marquis (Eaton) was giving great effort all night, his shot just wasn’t falling early. He was taking good shots, so it was stay the course. Caleb (Fields) was just so good for us tonight.  When you look at it our assist total wasn’t as high as we want it to be, but we still had four guys in double figures. We are a true team and those two guys on the floor are always willing to share it all the time. I thought Jerry Johnson Jr. was unbelievable tonight with four assists and 15 points.”

Despite three starters fouling out, A-State (5-1) saw four players reach double figures led by a game-high 22 points from freshman Caleb Fields. Fields was 7-of-14 from the field, including 3-of-4 from 3-point range and added five rebounds and four assists in his first game as a Red Wolf on the road. Graduate transfer Jerry Johnson Jr. added 15 points off the bench on 6-of-9 shooting, burying 3-of-5 from 3-point range. Junior Marquis Eaton added 18 points, 12 of which came in the final 5:45 of the game. Junior Christian Willis added 13 points on 5-of-5 shooting, hitting 2-of-2 from 3-point range.

A 13-2 run to open the second half saw Colorado State lead 52-35 with 16:22 to play. Fields drained a 3-pointer to get A-State turned in the right direction. Colorado State managed the double figures lead all the way to the 5:23 mark, 70-60. The Red Wolves outscored the Rams 20-8 down the stretch with eight of the 20 points coming from Eaton.

With the Rams leading 70-60, the Red Wolves went on a 13-2 run to lead 73-72, with 2:25 to play by way of a floater by Johnson Jr. Colorado State regained the lead on a layup, but two free throws by Eaton saw A-State lead 75-74 with 1:35 on the clock. Two free throws gave the Rams the lead again, but Eaton split a pair of free throws and following a defensive stop, Eaton drained a 3-pointer at the top of the key to give the Red Wolves a 79-76 lead with 21 seconds to play. Colorado State converted a layup to cut it to one, but Willis split a pair of free throws to set the final score at 80-78.

The Red Wolves trailed by six, 39-33, at the break in a first half that saw 13 lead changes and neither team lead by more than four points until the last four minutes of the frame. A 6-0 spurt by the Rams saw the home team take a 28-22 lead with 4:00 to play. CSU increased the lead to as many as eight points, 35-27, with 2:03 to play in the half, but the Red Wolves managed to get the deficit to six by halftime.

At 5-1, the Red Wolves are off to a 5-1 start for the first time since the 2016-17 season and are 5-1 or better after six games for the 13th time in program history. The win against Colorado State is the first in four meetings against the Rams and gives A-State a 4-14 record against Mountain West Conference foes.

A-State has 10 days until its next outing as the Red Wolves host Stephen F. Austin on Saturday, Nov. 30 at 4:00 p.m. inside First National Bank Arena. For the latest on A-State men’s basketball, follow on Twitter (@AStateMB), Facebook (/AStateMB) and Instagram (astatemb).

Original article source: http://www.astateredwolves.com//ViewArticle.dbml?DB_OEM_ID=7200&ATCLID=211816351 | Article may or may not reflect the views of KLEK 102.5 FM or The Voice of Arkansas Minority Advocacy Council