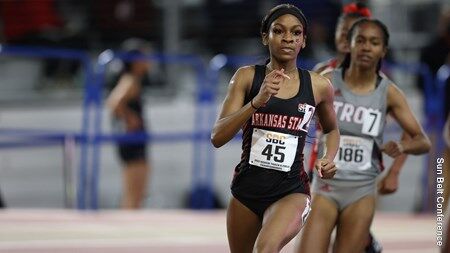 Colby Eddowes began the day by shattering the school heptathlon record, totaling 5,703 points after strong performances in the final three events. The Canberra, Australia, native led the entire event and broke the previous mark by 280 points.

Cheyenne Melvin nearly broke her own school record in the 600-yard run, winning with a time of 1:22.91, while Namibia Clavier earned a runner-up finish in the 400 meters with a time of 56.61 that is good for 10th on the program indoor list.

The 3000 meters represented the final events of the day, and A-State’s Pauline Meyer took the top spot, running a meet-record 9:36.54. Newcomer Hannes Fahl placed second in the men’s race, clocking a time of 8:36.09 in his debut, while Ryan Parson narrowly beat his previous collegiate best with a third-place finish in 8:38.97.

A-State returns to action after the holiday break, competing in a pair of meets. Some Red Wolves will trek to Topeka, Kan., for the Washburn Rust Buster (Jan. 21), while others will travel to Nashville, Tenn., for the Vanderbilt Invitational (Jan. 20-21).

Read more here:
Red Wolves Post Strong Opening Meet at Pitt State. Article may or may not reflect the views of KLEK 102.5 FM or The Voice of Arkansas Minority Advocacy Council