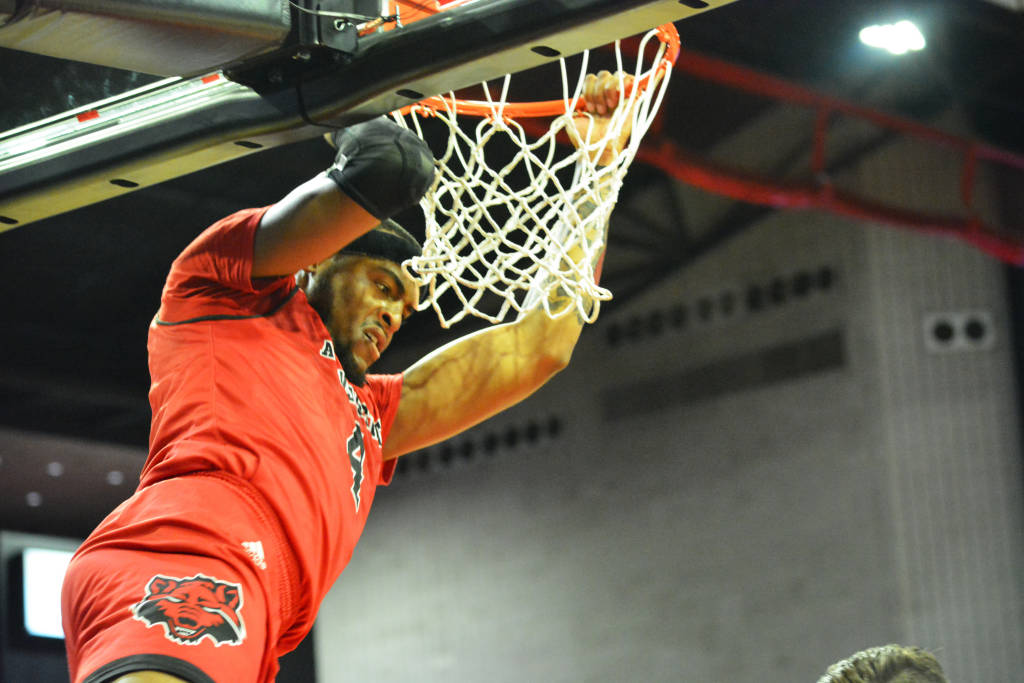 J.J. Matthews tallied a career-high 18 points on 9-of-12 while Caleb Fields added a career-high 17 points for the Red Wolves (3-1), who also got a solid 15 points out of Canberk Kus en route to the victory over the Aggies (2-2). A-State also had a knack for takeaways, forcing 23 turnovers in the victory.

“I’m so happy with our effort,” head coach Mike Balado said. “Effort and grit is exactly what we had tonight. We played a very good UC Davis team. Tonight, the offense won it. We made field goals and shared the ball, and I’m very happy with the win. It was a good team win.”

Offense was definitely the trademark of Friday night’s contest, with both teams shooting over 48 percent from the floor. A-State shot 48.3 percent on 28-of-58 shooting, but added 18 assists on those 28 made buckets. The Aggies shot 51 percent on 25-of-49. The Red Wolves also won the battle of the boards, outrebounding UC Davis 33-24. Malik Brevard pulled down a game-high 11 rebounds to lead the way in that category.

Three Aggies scored in double digits as well, led by 21 points from Joe Mooney, who connected on 4-of-11 from beyond the arc. Matt Neufeld added 14 points with Caleb Fuller chipping in 10.

After Mooney opened up the night with a trey, the Red Wolves went on a 13-2 run to lead 13-6. The Aggies could never inch closer than three after that stretch, as A-State seemingly had an answer for nearly every UC Davis score. During the Red Wolves’ early 7-0 run, the Scarlet and Black defense held strong, not allowing a bucket for nearly three minutes to allow the offense to go to work.

UC Davis fired back after the break with Mooney draining a pair of threes to start the half and cut A-State’s lead down to four. That would be as close as it would get for the rest of the night, as Kus opened up scoring for the Red Wolves with a three-ball of his own.

For every Aggie score, the Red Wolves would answer with runs of four or five points peppered throughout the second half. After a Mooney driving layup cut the deficit to nine with 13:43 left, a three-point play by Kus followed by a lay-in by Matthew brought that lead back out to 14 at 60-46.

One of the last scoring stretches for UC Davis came when Neufeld converted a three-point play before Fuller knocked down a three to get the game back into single digits. Kobe Wilson responded with a pair of free throws before Fuller scored an inside shot to make it a nine-point game with under 10 to go.

After that, the Red Wolves commanded the ballgame and surged out to as much as an 18-point lead. A pair of Brevard free throws closed out A-State’s scoring for the night as the Aggies finished out with a 5-0 run.

The Red Wolves Classic concludes on Sunday at 11 a.m. with UC Davis taking on VMI before the Red Wolves close the event against Idaho at 1:30 p.m.

Original article source: http://www.astateredwolves.com//ViewArticle.dbml?DB_OEM_ID=7200&ATCLID=211816135 | Article may or may not reflect the views of KLEK 102.5 FM or The Voice of Arkansas Minority Advocacy Council