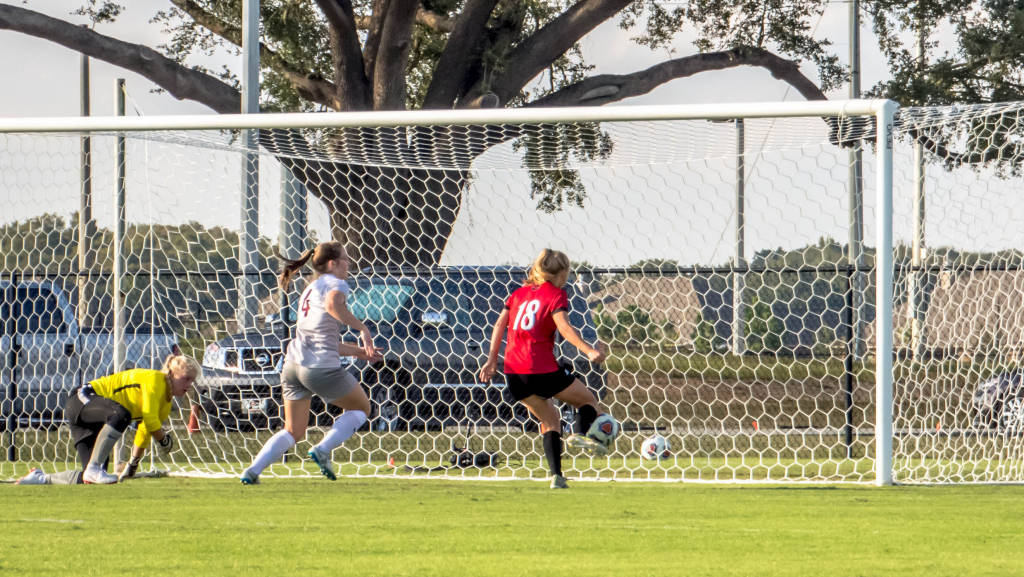 FOLEY, Ala. (10/31/18) – The Arkansas State women’s soccer team saw its season come to a close on Wednesday evening as the No. 7 Red Wolves lost to No. 2 Little Rock 4-3 in a shootout in the opening round of the Sun Belt Conference Championship tournament at the Foley Sports and Tourism Complex.

The score was tied at 1-1 after two overtimes periods that forced the match into the penalty kick shootout. The Trojans converted four of their five attempts, including a pivotal make by Nora Hellmers in the final round to force the Red Wolves to have to convert their try to continue the match.

Maggie Ertl kick from the 12-yard spot went toward the lower left post, but Trojan goalkeeper Sara Johansdottir guessed correctly and made the stop to give her squad the win.

Arkansas State (8-7-3) struck first in the match when Hailey Furio scored in the 12th minute of the match after collecting a rebound off a shot attempt by Sarah Sodoma that Johansdottir saved, but could not corral the rebound. Furio, who was making a run to the far post, swiftly took one touch and put the ball into the net for game’s first goal.

Little Rock answered in the 58th minute when Liesa Seifert put in a header to the near post off a corner kick by Morgan Smocovich even the match at a goal each.

The Trojans controlled much of the pace in the second half after A-State had the edge in the first 45 minutes of play. Despite playing against the attack, the Red Wolves had a chance in the 76th minute to take the lead when Julianna Coates took a pass from Taylor Schneider near the six-yard box, but the attempt hit the crossbar and bounced right back to Coates who shot again but the attempt went wide.

Kelsey Ponder, in her final match in goal for Arkansas State, made seven saves on the night including a diving attempt as time expired in regular to send the match into overtime.

In the first overtime period, Schneider had a header go on target off a Riley Ebenroth corner kick and Victoria MacIntosh had a shot go wide right. Sodoma and Furio each had shots in the second overtime, but nothing that landed on goal as both sides struggled to find an offensive pace.

Little Rock outshot the Red Wolves 17-14 and had an 8-3 edge in shots on goal. A-State finished with seven saves, while the Trojans had two.

Original article source: http://www.astateredwolves.com//ViewArticle.dbml?DB_OEM_ID=7200&ATCLID=211778556 | Article may or may not reflect the views of KLEK 102.5 FM or The Voice of Arkansas Minority Advocacy Council