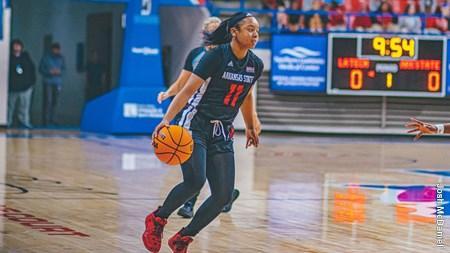 A-State (0-2) held a 10-point lead midway through the third quarter, but a 23-2 run over the final eight minutes lifted the Skyhawks (1-1) to the home triumph. UT Martin edged the Scarlet and Black in the rebounding column 40-36 and forced 19 turnovers.

Mailyn Wilkerson led three Red Wolves in double figures with 14 points on 5-of-10 shooting, including 4-of-8 from deep. Izzy Higginbottom added 10 points with five rebounds and five assists, while Jade Upshaw provided valuable minutes, scoring 10 points in 23 minutes off the bench. Anna Griffin led all players with a career-high 13 rebounds and scored eight points to accompany four assists.

A trio of Skyhawks scored in double digits, led by Paige Pipkins’ 23 points on 10-of-16 off the bench. Kenley McCarn and Shae Littleford each added 19 points, with 12 of Littleford’s points coming in the second half.

A-State overcame seven first-quarter turnovers and an 0-for-5 start from the field to lead 13-11 after one. The Red Wolves hit four straight shots to end the period, including a pair of treys off the bench by Upshaw.

The Red Wolves shot over 50 percent from the floor, including 3-of-3 from deep by Wilkerson, to lead 33-27 at the half after a putback by Melodie Kapinga beat the clock. Kapinga’s bucket capped a half-ending 7-0 run that also included Tieriney Echols’ first career score.

UT Martin chipped away at the deficit after a Higginbottom trey and Upshaw floater made it a 10-point affair. The Skyhawks closed the third on a 10-2 run to cut A-State’s lead down to 48-47 after three.

After Higginbottom opened the fourth with a three, UT Martin surged ahead with a 18-1 run, including a stretch of 15 straight to open up a 65-52 lead. Pendleton halted that run with a mid-range pull-up, ending a 0-for-8 stretch. That would be the final score for Arkansas State on the night, as a Littleford trey began a game-ending 8-0 run for the Skyhawks.

Arkansas State has a quick turnaround, taking the court in under 48 hours for its home opener against Hendrix. Tip-off against the Warriors inside First National Bank Arena is slated for 7 p.m. on ESPN+. The game can also be heard on the radio via the EAB Red Wolves Sports Network station 95.3 and 96.9 The Ticket Radio Network.

More here:
Red Wolves Fall 73-54 at UT Martin. Article may or may not reflect the views of KLEK 102.5 FM or The Voice of Arkansas Minority Advocacy Council