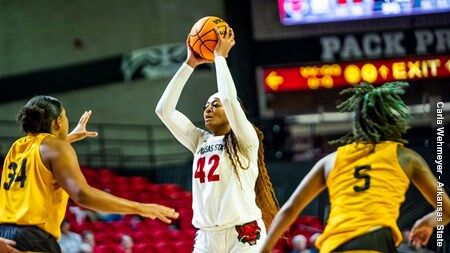 HATTIESBURG, Miss. (1/12/23) – A stout defensive effort by Southern Miss was tough for the Arkansas State women’s basketball team to overcome, as the Red Wolves dropped a 61-36 decision Thursday night inside Reed Green Coliseum.

Mailyn Wilkerson and Melodie Kapinga scored eight points apiece to lead the Red Wolves, who were limited to 25.5 percent from the field on 13-of-51. Kapinga added 10 boards to lead all players, as A-State was edged 37-36 in the rebounding column.

Four players scored in double figures for USM, which shot 24-of-56 for a 42.9-percent clip. Jacorriah Bracey scored 16 points with seven rebounds, while Domonique Davis added 15 points. Lani Cornfield chipped in 13 off the bench with Melyia Grayson scoring 10.

Both teams struggled from the floor early, with A-State starting without a field goal in its first nine attempts before Wilkerson scored five late points to end the quarter. The sides combined for 14 total turnovers in the quarter as Southern Miss led 11-6 after one.

After a Davis layup gave the Lady Eagles a seven-point lead, the Red Wolves fired back with seven unanswered to tie it on a 3-pointer by Jade Upshaw. Davis then answered with seven straight before both teams endured a lengthy scoring drought. A-State scored five straight to end the half down just 20-18, with Wilkerson knocking down a trey with 21 seconds left until intermission.

The Scarlet and Black struggled to find a bucket in the third quarter, as Anna Griffin’s lay-in at the 4:58 served as the only score of the third quarter. Southern Miss led 45-20 after three. A-State pulled within 19 in the fourth via an 8-0 run, but the hosts closed with 10 of the final 14 points to expand the final margin back out to 25.

A-State continues its four-game road swing Saturday, Jan. 14, facing Texas State. Tip-off against the Bobcats inside Strahan Arena is set for 2 p.m. CT on ESPN+. The radio broadcast can be heard live via the EAB Red Wolves Sports Network station 95.3 and 96.9 The Ticket Radio Network.

Read more from the original source:
Red Wolves Fall 61-36 at Southern Miss. Article may or may not reflect the views of KLEK 102.5 FM or The Voice of Arkansas Minority Advocacy Council