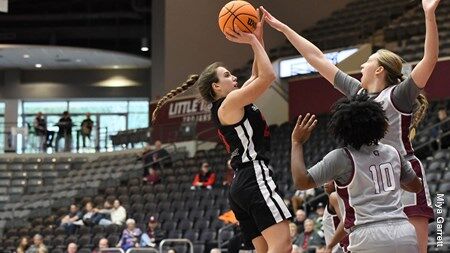 LITTLE ROCK, Ark. (12/18/22) – A tough defensive showing from Little Rock was tough to overcome for the Arkansas State women’s basketball team, which fell 60-44 to the rival Trojans Sunday at the Jack Stephens Center.

Izzy Higginbottom led the Red Wolves with 13 points, going 7-for-8 from the free-throw line to mark her 11th straight game with double-figure points. The Batesville, Ark., native handed out a team-high three assists while recording four rebounds and three steals. Mailyn Wilkerson added nine while Lauryn Pendleton scored eight off the bench. Leilani Augmon led the Red Wolves in rebounding with 10.

Tia Harvey and Nikki Metcalfe led the Trojans with 17 points apiece while Jaiyah Harris-Smith racked up nine rebounds and eight assists to go along with eight points. Metcalfe also swatted away five shots.

After the Trojans scored the game’s first four points, A-State closed the first quarter on a 6-2 run to lead 11-9 after one. Both teams shot no better than 25 percent in the quarter, but Wilkerson scored five of her seven first-half points to lead the charge.

The Trojans reclaimed a 15-13 lead midway through the second, but Augmon tied it with a jumper at the 3:53 mark. A-State pulled within one, but the hosts picked up a pair of late scores to hold a 24-20 edge at intermission.

A Pendleton jumper opened the second half to cut it to 24-22, but the Trojans went on a 15-0 run to push their lead to 37-22 before a Higginbottom score broke the drought with 5:32 to go in the quarter. The Trojans’ led by as much as 18 in the quarter and held a 46-30 lead entering the fourth.

Little Rock’s largest lead of the game came early in the fourth when a Metcalfe jumper made it 52-32 with 7:05 remaining. A-State clawed back to within a dozen with an 8-0 run before six unanswered by the Trojans put the margin at 60-42 with over a minute to play. Wilkerson drove in a layup with 37 seconds to go for the final bucket of the contest.

A-State now sets its sights on Sun Belt Conference play, which opens Thursday, Dec. 29, at ULM. Tip-off against the Warhawks inside Fant-Ewing Coliseum is set for 6:30 p.m. on ESPN+. The radio broadcast can be heard live via the EAB Red Wolves Sports Network station 95.3 and 96.9 The Ticket Radio Network.

Read more from the original source:
Red Wolves Fall 60-44 at Little Rock. Article may or may not reflect the views of KLEK 102.5 FM or The Voice of Arkansas Minority Advocacy Council